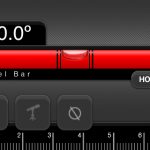 Because you’re simply not human nowadays if your iPhone or iPod Touch isn’t on your person at all times, it’s nice for the home renovator to know that there’s now a non-vapid reason to carry it with you during a project. For a mere $0.99 (probably the cheapest product mentioned on HomeFixated.com), the A Level iPhone app, a digital accelerometer, can be downloaded from iTunes. With this app, you may have a decent chance of getting your shelves, tables and other planes of flatness more level (and looking super cool while you do it, too!). Mind you, this isn’t a tool you’ll want to depend on if you’re putting together something that needs some pretty specific engineering – you know, like a nursery school. It does, however, give you a decent sense of balance in a jiffy. Perfectionists be aware: early adopters of this app have generally enjoyed it, but the complaints of accuracy have been voiced. For example, your iPhone or iPod Touch will not stand on its side independently – so keeping it upright with your hand can affect the readings. This app will, however, also work while your gadget is resting flat on its bum (for lack of a better word), which definitely comes in handy. It’s available from Posimotion, the same company that brought you the apps “G-Spot” and the soon to be released “Bikini Hunt”, so you know it’s got to be good! For $0.99 from the iTunes app store, it’s hard to complain about the A Level iPhone app. If anything, it will make you look handier and more grown-up like than say, the iFart application you downloaded the other day.