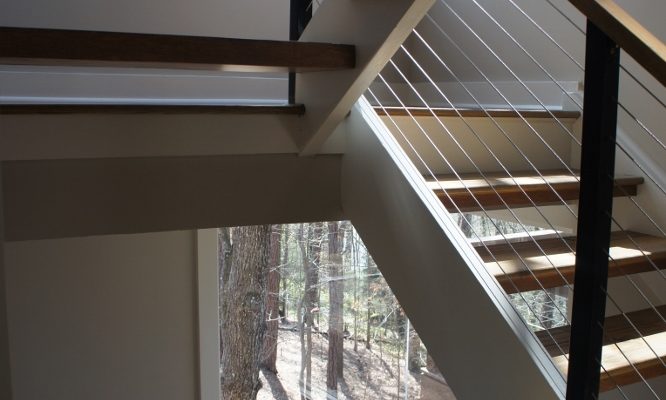 I moved to Atlanta about 5 years ago and one of the things I noticed about this city is that they seem to go through building style phases. I can almost tell just by looking at the outside of a house what decade it was built in. They’ve spent the last 1.5 decades building one craftsman style house after another. Hey builders, it’s getting a little boring, let’s change it up a little. What does that have to do with DIY cable railing you ask, I’m getting to that…

Not long ago I renovated a house that the bank practically paid me to take, it was in such bad condition. It was built during the “contemporary phase,” which took place during the 70s and 80s. It was a huge contemporary style house sitting at the top of a hill overlooking a creek and wooded area. It seemed to have a deck hanging off every vertical surface and the interior stair railings were seriously outdated. The first thing I thought was Yay, I love renovating contemporary houses! The next thing I thought was there’s an awful lot of decks here and they’re in pretty sorry shape and we’re probably going to need to rebuild most of them. Then I started thinking (yes, I do a lot of thinking) – this view is amazing, it would be great to actually be able to sit on one of the decks and enjoy it.

Then it hit me, cable railing! That would look awesome in one of these old contemporary style houses. Since there were so many railings in and around the house I decided to get a quote to have the cable railing professionally installed. I’m sorry to report that the quote I received gave me a serious case of sticker shock and I’ve lost all memory of that horrifying event so I can’t even tell you what the quote was. But it did prompt me to research some way to do this myself, and I’m happy to report that cable railing is totally a do it yourself project.

What to Know About Cable Railing

First and foremost check your local building codes, the last thing you want to do is spend time and money installing cable railing just to find out that it won’t pass inspection. Since my material cost was going to be around $8000 (don’t forget, the house had about a million decks, stairs and railings inside and out!) and the company I bought the railing from has a no return policy on custom assemblies, I decided to call my local building inspector and ask him if they allow cable railing. Even though it’s not prohibited in the IBC (International Building Code), some local jurisdictions don’t allow it. He said as long as he couldn’t, with all his might, force a 4” sphere through the rails it would pass inspection. Just to be on the safe side I ordered only enough railing for one medium sized deck, installed it then called the inspector and asked him to check it before I did the rest of the decks and railings. He gave the thumbs up so we were good to go. Quick note, even if you pass a building inspection, a home inspector could still flag the railings as a climbing hazard. Definitely something to be aware of if your railings will have any little kiddos around them.

Secondly, cable railing does this thing called deflection. No matter how tight you make it there will be some degree of deflection so the cable rails need to be less than 4” apart. Deflection is what causes a lot of cable railing installations to fail. Now that we’ve gotten that out of the way let’s talk about how easy it was to install.

I found a company called Feeney, Inc., their slogan is “Feeney makes it easy” and they really do! They don’t sell direct but they’ll hook you up with a local distributor and they’ll help you determine what you need and then forward your order to the local guy. Since I was dealing with so many decks, I sent them hand drawings of each deck with the dimensions written in. I just had to tell them if I was using 4×4 or 6×6 wooden posts or 2×2 or 4×4 metal posts (or a combination of those) – you can use different size wood or metal posts – cable railing is flexible like that.

For the exterior railings we used 4×4 metal posts on the corners of the shorter runs so we could make a 90 degree turn inside the posts (any time you can turn a corner in a post you’ll save the cost of 10 or 11 fittings) and we used 4×4 wood posts everywhere else.  For the interior runs we used 2×2 metal posts throughout. Feeney packages each cable assembly separately, and it includes the cable with the threaded terminal fitting already attached, the quick connect fitting and all the nuts and washers you’ll need to connect everything, no specialized tools required!!!

All we needed was a drill, a wrench, cable cutters and a pair of plyers. If you can drill a hole you can install this cable railing. Once you have all the holes drilled all you have to do is string the cable through, pull it tight and trim it off. As directed, we tightened ours beginning with the center rail and then alternated above and below until all we had left was the top and bottom rows, this method will keep even pressure on the posts.

After the railings have been installed they tend to relax a little, but never fear! You can tighten them by turning the nut on the threaded terminal end and they’ll be as tight as the day they were installed.

So there you go, whether you’re from the Jimmy Cliff generation or the Johnny Nash generation you can install your own cable railing! It’s easy!