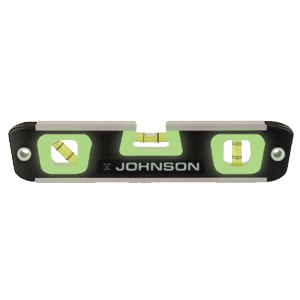 What more could you want in life? I mean, seriously. Just you and the other guy, same size, same weight, and the same willingness to talk things over, do a lot of pointing and waving and yelling, and then have a beer after it’s all over. A level playing field.  That’s what I’m talking about.

Ok, what I’m really talking about are levels, or niveles for our Latino friends.  I’m sizing up the Johnson Glo-View Magnetic Torpedo Level.  Back in the day, having the best levels could actually get you a little more money if you were in the construction biz. People assumed you knew more than the other guy who had a level with varying hand-written descriptions on it noting how to operate this incredibly difficult tool. These might have included, “This end up,” or  ”Ok July 12th“ (never a year included), and, always a crowd favorite, “Not this one” for bubbles gone bad.  Sometimes the instructions pertained to the whole level, and sometimes to the individual vials. Hey, lots of you guys had “customized” levels.  You know who you are.

Old-Style Levels Are Out

As the years went on, the quality surged to levels never before seen (I had to say that).  Yes, gone were the days of vials that actually had screws you could adjust them with. You know the ones, where the last little tightening with the screwdriver would twist the vial so you had to start all over again. Plastic or glass vials that broke easily also were the norm back then. As acrylic vials and sturdy box levels started to enter the marketplace, the degree of badness (after all, nothing is perfect, so you’re actually measuring how “bad” it is) really came down. There was actually a measurable difference between levels that set some apart from others. Gone were the days of, “It’s pretty much between the lines.”

Johnson Is a Leading Manufacturer of Levels

Johnson Levels  have been around since a year before my brother’s wife was born. Founded in 1947, Johnson is a leading manufacturer of more than just levels, but a host of professional quality tools designed to help people like us get our work done more efficiently and as accurately  as possible.  Johnson recently sent us their Glo-View Magnetic Torpedo Level . It’s model number is “007” which we find suspiciously James Bond like for this gadgety level. The vials are a patented  Glow-in-the-Dark vial system that really helps you see them  in low light situations. The level also has a “V” groove along the length of the bottom with some really strong rare earth magnets set in it, so you can get some grab between the level and a pole, pipe or beam.   I had to really bang my test pipe on the ground to get the Johnson Level to fall off. (Could be that’s the reason why they didn’t send us their triple beam laser level? Hey, you gotta push things to the max to see what they’re capable of right?). We found the glow feature bright enough to see the bubbles by after a brief charge in bright light. It’s not as bright as a battery operated lighted level, like the Festool Lighted Level we reviewed, but it can still get the job done, and do so without batteries.

The Johnson Level Is A Great Buy At Under $20

is a great buy. I checked this level against some of the ole’ boys in the garage/shop and I can see now I have to put some of them out to pasture. Being a half a bubble off doesn’t cut it in the workplace, like it does in Hollywood or politics. We actually have to earn our money. Oops, wasn’t supposed to go there, sorry.

“A level playing field in marriage occurs when the wife says so, not when the husband thinks so.”
– A smart man