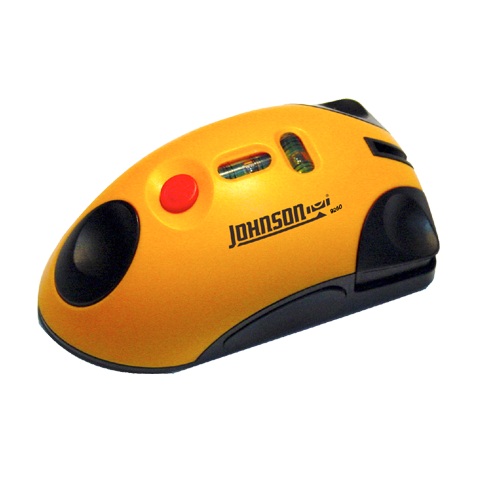 When Marc received a demo sample of Johnson’s Hotshot Laser-Mouse and asked if any of us wanted to review it, I jumped on the opportunity – mainly just so I could walk around my house and randomly shout “LASER MOUSE!” while pointing the red beam every which way (except in the way of my husband’s eyes. That’s a no-no with lasers). And while that never gets old, the performance of the Laser-Mouse (as intended by its manufacturers) was a bit of a mixed bag.

The package includes the laser-level mouse, two AA batteries, a little carrying pouch and some extra “SuperStik Technology”. Pop the batteries in, gently remove the protective paper tabs from the grey putty and away you go!

The laser works to up to 30′ away and based on my test of shooting it from one end of my home to the other, it indeed beams a nice straight line well across a couple rooms. I made a mental note about going as Predator for Halloween and carried on.

Next, I tested to see how well it would perform on the wall. After checking the bubble levels (two are embedded in the mouse) and feeling confident I had a straight line, I pressed the sticky buttons down (two are on the front, one is on the back) and … 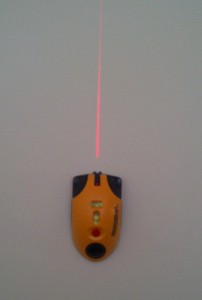 I let it hang there for a good five minutes, banged on the walls as if I was hammering nails next to it and the Laser-Mouse kept on gripping the wall with the same unwavering intensity you’d find in my eyes when there’s cake in the room. The levelling tool worked just as well when I used it horizontally.

To remove the Laser-Mouse from the wall, you gently lift one side and then the other, almost as if you were doing a Queen’s Wave. The putty buttons instantly retracted and it appeared that the Laser-Mouse had freed itself from the wall without incident. And that’s where this review gets a bit negative: 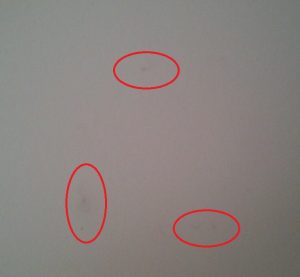 I drew the red circles to illustrate what the Laser-Mouse left behind: a bit of a Laser-Mouse Mess. The product claims to leave “no marks”, but three grey smudges of the putty remained on my wall, despite gently removing the mouse according to the instructions. Hmph.

However, the worst came when I took the instructions’ word for it that “slight adjustments to the unit’s position can still be made once it is already fixed to the wall.” I popped Laser-Mouse on the wall, stuck it down and then tried to slightly pivot the mouse over a couple degrees. This seemed fine until it was time to remove the mouse from the wall: 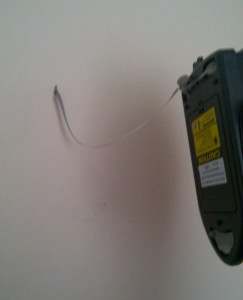 Uh, no. It was just like if gum gets stuck to your shoe on a hot day. Needless to say, this also left marks on the wall and Hotshot’s ego a little bruised.

In all, Johnson’s Hotshot Laser-Mouse has a few great things going for it:

However, the “SuperStik Technology” still needs a bit of work if it’s to live up to its claim of being mark-free. And should the people at Johnson want to do an update, a magnetic stud finder might make this tool even more valuable. Then it would truly be the Hotshot around our home.

is available at Amazon for under $18.