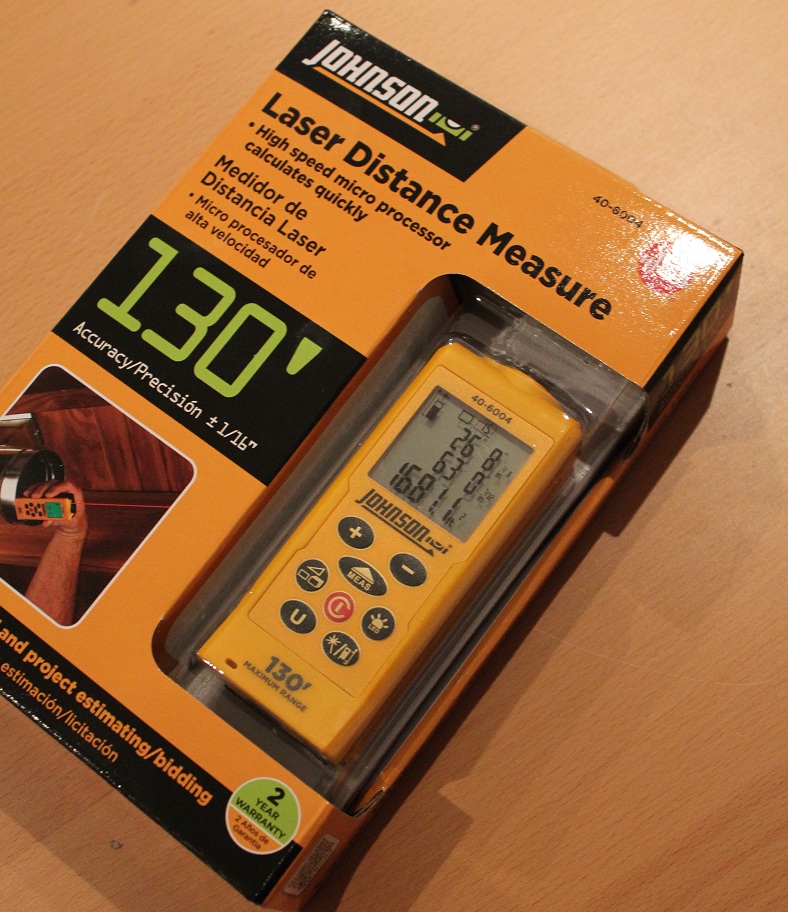 Sometimes it’s hard to get excited about a tool when it’s, say, a hammer. Don’t get me wrong, hammers are great – but you don’t exactly walk around showing it off. (Or maybe you do. There are a lot of, uh, interesting people out there.) But when a tool points lasers and has an LED screen and computes numbers, it’s a totally different story and level of excitement. And that’s why I’m happy to provide you with this review of the Johnson Measure Laser 40-6004, because it is so much cooler than a hammer. (Again, no offense to you hammer weirdos enthusiasts out there.)

Without a doubt, the Johnson Measure Laser 40-6004 is a tool, but it’s also a toy. A neat, neat toy. Sure, you could use a measuring tape to find out the distance from point A to point B, but why would you? That’s like playing music on a Sony Walkman when you have an iPod Touch at your disposal. If you take the occasional measurement and enjoy DIY around the house, the Johnson Measure Laser is a splurge, but if you take measurements frequently – such as an appraiser, inspector, or a professional in fields like house painting, contracting, and other jobs where estimating spaces and areas are an everyday occurrence – the Johnson Measure Laser is a definite time-saver, and dare I say – a must. 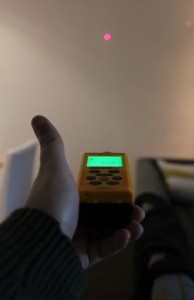 The gadget is simple: you turn it on, a laser emits from it, and you can measure the distance of that beam. Simply place the Johnson Measure Laser at a chosen spot, point the laser to the distance you want measured, and press the measure button. You’ll hear a few clicks and a measurement is displayed on the screen. With the touch of a button, you can select to see this measurement in inches, feet, or get your metric on in meters. There are other versions of the Johnson Measure Laser that are activated by clapping your hands (Clap on. *Clap Clap* Clap off. *Clap Clap* Clap on, Clap off … THE CLAPPER), but this isn’t it. (I just wanted an excuse to sing that jingle.) That doesn’t make the 40-6004 any less easy to use.

Should you want to measure the length of a room from one wall to another, the task is made simple with the Measuring Reference Button that lets you factor in whether the Johnson Measure Laser is touching the wall (in which case the internal computer includes the length of the tool itself), if you’re using the corner extension rod (a simple stick-like attachment for tight corners), or if you just want the measurement to start from the front of the tool (should you already have the beam flush from your desired starting point). Simply select the preference you like and then take your measurement.

But simple lengths aren’t all the Johnson Measure Laser can do, which brings up a term I haven’t heard since high school: a Pythagorean triangle. If that means as much to you as it meant to me (a big ol’ “uuuuuhhhh?”), here’s the refresher: With a formula (that you don’t have to worry about, the Johnson Measure Laser does all the brainy work, so you can just stand there and look pretty!), you can figure out a tough-to-get measurement using two other easily acquired measurements. Specifically, if you’d like to know the height of a wall, you merely need press the Measure Function Button and select the Pythagoras option, beam the measurement to the top of the wall, beam a second measurement at the bottom, and the Johnson ML will calculate the distance between those points. Brilliant!

You Can Also Calculate Area, Volume, and More With the Johnson Laser

Additional calculations you can do include area and volume, as well as adding measurements to create a total measurement or subtracting a measurement should you want a partial spec. It’s literally all easily done with the click of a button. Should you need more visibility, the display screen has an LED light button, and your measurements can be displayed with a glowing green hue that looks positively radioactive but is very effective in improving measuring experience should you be calculating lengths during a date over a dimly lit dinner. 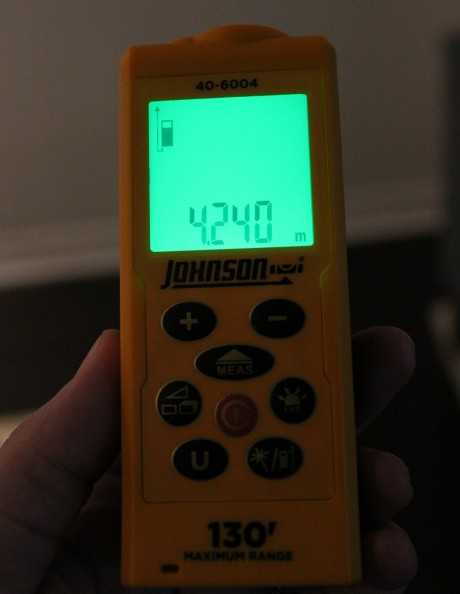 In total, a range of 2” to 130’ can be measured by the beam to an accuracy of 1/16 of an inch.  It feels like an old cell phone but without the clunky weight. (It comes in at a whole 0.66 lbs.) The two AA alkaline batteries should last you 10,000 measurements, provided you don’t use it for impromptu laser tag sessions. The Johnson Laser Measure 40-6004 is available for $129.99 at Amazon and other fine retailers.  Its sister tool with longer range, the Johnson 40-6005 230-ft Laser Distance Meter

is also available for around $210.