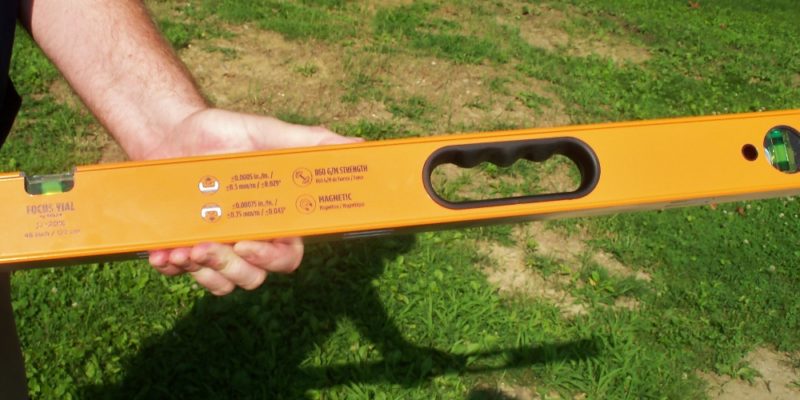 Level and plumb are two of the basics of construction and Keson has been at the craft since 1968 when Roy Nosek started the business out of his basement. There are substantive differences in their Keson Magnetic Box Beam Level – model LKB48M, most notably the Focus Vial by SOLA with 20% magnification and color contrast for easier reading of the bubble. Keson sent us one of their magnetic box beam levels recently, and we’re ready to level with you on our opinion of it.

Keson and SOLA – Not Leveling the Playing Field

As Aaron Nosek, Keson LLC President shared, in addition to the line of SOLA levels, “We are also very excited to capitalize on the SOLA’s long history of manufacturing and cutting-edge innovation to provide a more affordable version of high-quality levels under the Keson brand.”

This Keson Magnetic Box Beam Level is a bargain coming in under $80. The list of features and benefits are as follows:

A Sight for Sore Eyes – The SOLA Focus Vials are Enlightening

The merger between Keson and SOLA have partnered their manufacturing capabilities but also their innovative technologies. The Keson Magnetic Box Beam Level utilizes three SOLA Focus Vials that have a 20% magnification power. Another tremendous feature is the two color contrast that makes sighting in the bubble so much easier.

When compared to a more traditional level, I found the Keson Magnetic Box Beam Level is significantly easier to read from a far, from the top, as well as looking at the focus vials on the far ends.

The Keson Magnetic Box Beam Level has put that little bit extra into the ergonomics of this line of levels. It would be faster and cheaper to utilize a slot in the body but instead Keson added the two handholds and still kept the price down.

Not all 48 inch magnetic levels are created equal. I own one of those ‘other’ brands. When I place my other 4 foot level on a metal pole or edge of a metal shelf, it immediately slides straight down to the floor. While it does stay magnetically attached to the metal, it gives in to our friend gravity. The Keson 4 foot level has SIX sets of magnets with the power to hold tightly exactly where you place it – even hanging upside down from a steel I-beam. Gravity, schmavity!

The magnets are easily seen on the smoothly machined side of the aluminum box beam. The Keson Magnetic Box Beam Level feels solid and substantial when you are using it but actually weighs in at a svelte 3.4 lbs. The combination of the hand holds, aluminum body, and Focus Vials make this both a precise and sturdy tool for any work site.

Whenever I am digging holes, pouring cement, and securing large, heavy posts, I find that my friends don’t return my calls as quickly. . .or at all. This makes the Keson Magnetic Box Beam Level the perfect tool to free up my hands while making sure that my posts are plum and true in all directions before the cement sets.

The fact that Roy’s wife Evelyn suggested the name Keson based upon spelling their last name backwards speaks to some humility in their origins. They have worked as a family for 3 generations to create and innovate. They look to be continuing this family tradition with the new product line and the Keson Magnetic Box Beam Level. This is a high quality level at a very affordable price point.

Pick up your own Keson Box Level for under $80: