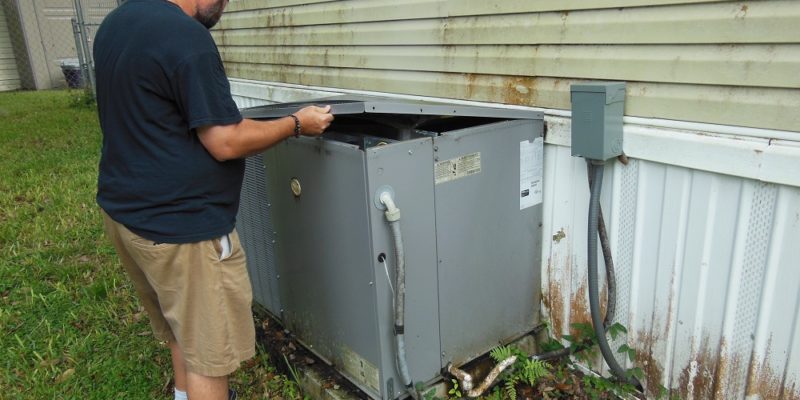 Murphy and his stupid law dictates that an air conditioner must always break down at the absolute worst time: right after the repair services close up shop for the weekend. And always in the dead heat of summer. Sure, many AC techs will come out on Sunday. But they’re never cheap, and now you have to pay their inconvenience premium. Or do you? Nope! There’s one simple repair – the most common of all AC failures – that you can perform yourself and save some cool bucks in the process. In this hot little DIY AC repair tutorial, we’ll show you how to repair your own AC (and how to do it safely)!

Hot Under The Collar (And Everywhere Else) – DIY AC Repair

Here’s the scenario: I’d just finished up the picnic table project and was sitting at the computer tweaking the part of the article where I was complaining about the Florida heat. Next thing I know, I start to realize it’s getting really hot in the house and the AC is blowing warm air. I checked the thermostat: 84°. Ugh, the cruel irony!

I replaced the filter not too long ago and the thermostat seems to be working. But then I hear it coming from out back (the back yard, not Australia): the faint telltale “click” followed by a sustained “hum”. The hum would last about 20 seconds then stop, only to repeat a minute or two later. So I went out to the heat pump and waited for the next “click-hum” cycle to start. Sure enough, it’s coming from the AC unit.

The click is the relay (contactor) doing its job. And the hum is the compressor. Those are normal sounds. What isn’t normal is the fact that the cooling fan isn’t running. Then, sensing there’s a problem, the unit gives up and tries again in a couple minutes. The fan that circulates air through the ductwork is working; there’s air blowing from the vents in the house. But it’s not happy air. It’s hot and miserable. And so am I.

Given the symptoms, I believe what we’re facing here is a bad motor run capacitor. It’s by far the most common heat pump failure and an easy fix that you can tackle yourself. But before going any farther, make sure you understand the dangers of poking around electrical circuitry. NEVER try to work on a live circuit. Doing so is not cool; it’s dumb and can kill you.

ALWAYS disconnect power to the unit before removing the cover. Make sure you understand how to use your test equipment to verify that there is no power or residual charge before touching any internal wiring or components.

Undertaking DIY AC repair successfully will make you the family hero, and ours! But we prefer our heroes alive. That way they can enjoy the fruits of a job done well (and safely) – and continue to enjoy the awesome content here at Home Fixated! So please, be careful. If you don’t feel comfortable tackling this job, hire a professional.

Double Check That There Is No Power Going To The Unit!

Trace the power lines coming in from the breaker box. Set your volt meter to read AC line voltage. (That’s “AC” as in “Alternating Current”, not to be confused with “AC” for “Air Conditioning”.) Set your meter to the proper voltage range and verify that there is indeed no power to the unit.

But don’t start grabbing at things quite yet!

Make Sure The Capacitor Is Discharged Before Going Any Further

Just because the unit isn’t powered doesn’t mean there aren’t vicious pixies waiting to bite you. The capacitor is a fairly low value (at a high voltage) but it’s still capable of storing a nasty charge!

Note that I will occasionally use the term “cap”, which is technical shorthand for “capacitor”. The two mean the same thing and can be used interchangeably.

Locate the capacitor. Sometimes there will be two separate capacitors: one aluminum-bodied capacitor and another one, often with a black, plastic body. You want the aluminum one. It will usually be cylindrical, but some are more oval shaped.

The motor run capacitor operates on alternating current power. But since the unit is powered down, if it is retaining a charge, it’s going to be a DC voltage. So set your volt meter to DC Volts and probe the terminals to make sure the cap is completely discharged. Measure between the common lead and the other(s).

If you find any voltage (even if it’s only a few volts), use a long screwdriver with an insulated handle to short the terminals together. If there was any voltage, it will spark; that’s OK. Actually, you may want to go ahead and short the terminals anyway, just in case. If you measured voltage before, double check to be sure it’s fully discharged now. Hang in there, you’re almost an DIY AC repair pro now!

Feeling Hot Under The Collar? Pop That Cap!

Carefully disconnect the capacitor. You may find it easier to use a pair of needle nosed pliers. Grab and pull at the connectors (don’t tug on the wires). But first, make a record of which wire goes where. On mine, each terminal has a different number of lugs, so I wrote that number and the wire color on the metal chassis with a permanent marker. I also took a close-up picture with my phone. Don’t rely on memory or you may be sorry.

You’ll find more often than not that the capacitor is fastened with a metal strap. In this case, however, it’s just sitting in a hole, held in place by gravity. I had to move another part out of the way to get enough clearance to lift it out of there.

Testing The Capacitor – The Moment Of Truth

You can sometimes tell a cap is bad just by looking at it. If the top is bulged out (domed) – or, even more obvious, blown open – there’s no need to test it; it’s definitely bad. If it looks “normal” (flat on top), you can tell for sure by testing it.

To test the capacitor, use a… wait for it… capacitor tester! What? You don’t own one? Cool your jets; it’s not the end of the world. If your AC is doing the same thing(s) as mine (you hear the relay click followed by a hum, the circulating fan is blowing air through the ductwork as it should but the heat pump cooling fan is NOT running), odds are, this is the problem.

Buying a new capacitor in this situation is a pretty safe bet. Not a sure bet, mind you. But a high probability proposition that – in my opinion – is well worth the gamble. Especially considering most replacements can be purchased online for under $20.

Oops! That came out wrong. First of all, a little damage control: my wife IS super hot! (Phew, that was close!) Self-preservation aside, neither she nor I want to have to sweat it out until Monday. It’s already way too warm in the house and we’re spoiled creatures of comfort. Gratuitous sweating isn’t our thing.

The local appliance parts dealers have already closed for the weekend and it’s too late for next day delivery through Walmart’s website. We also don’t have Amazon Prime. Both of those sources have the part I need for around $8-12, but one is estimating Tuesday delivery and the other is saying Thursday. Ain’t happenin’, Cap’n! Not on my watch.

Being resourceful, I turned to Facebook and posted a listing to about fifteen local buy/sell/trade groups asking if anyone had a capacitor I could get from them tonight or tomorrow morning. And voilà, within twenty minutes I got a response from an AC technician in the next town over! He was willing to sell me one off of his truck for $20 (WELL worth it). And I tossed him an extra $5 for being so awesome.

But The New Capacitor Is Bigger – Don’t Lose Your Cool!

There’s a chance that the replacement part you receive will be physically larger or smaller. As long as the values are correct (and the voltage rating is the same or higher), it will work. But you may have to alter the mounting strap (or hole, in my case) to accommodate the new dimensions.

With a strap mount, you can usually bend the strap or re-drill the screw hole to tighten or loosen it. Just make sure it’s secure and don’t crush the body of the capacitor. Also, make sure the terminals can’t short against or come too close to anything else.

Bringing Back The BTU’s – Even Our Dog Is One Cool Cat!

By the time I got back home with the part for this DIY AC repair, it was already dark. But I didn’t care; I have an aversion to being miserable. I turned on some bright outdoor lighting, grabbed a flashlight and installed the new part. Well, after resizing the mounting hole.

After installing the new part, re-engage the breaker(s) and enjoy your sweet, cool air! Carefully reattach the access cover once you see that all is well.

Some units may take a few minutes to reactivate after power is restored. But once it kicks back on and you see that fan spinning, you’ll be the coolest DIY AC repair guy or gal around!

President Of Your Own Fan Club – Easy DIY AC Repair

This obviously isn’t going to fix every case of AC failure, though it is a surprisingly common problem. The capacitors just fail over time. Other times they blow out as result of a thunderstorm. But the good news is there’s a good chance that the next time your AC fails, you may be able to restore operation without waiting days for a technician to make it out. And for a lot less money. So don’t get all hot and bothered. Stay cool, be safe, and fix it yourself!

Nab a replacement capacitor for about $10-$20 at Amazon: