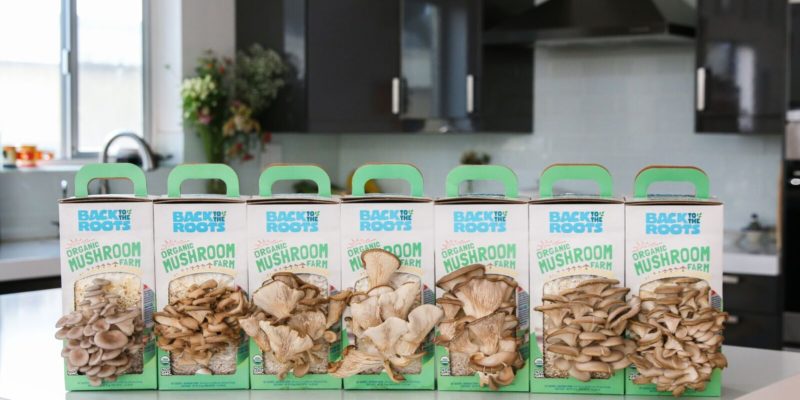 Mushrooms are generally considered to be a highly nutritious food source. And I love mushrooms: stewed in soup, chopped up in omelettes, cubed in gravy on steaks… Okay, maybe they’re not as healthy as they could be when they’re smothered in flour and butter, but they are still delicious. It’s no real surprise that I’ve tried to grow them in the past. However, a Back-to-the-Roots Mushroom Growing Kit make this a much easier process.

At my suggestion, our editor contacted the company about having us test their products out for Home Fixated. I was naturally happy to serve as a guinea pig for this project. The product arrived promptly at my house. It was packaged well, as you can see from the photo below. Even though the mushroom kit arrived at my house several days beforehand, it took me two days afterwards to actually get around to soaking the substrate and setting it all up.

Each kit comes with an informative brochure that contains growing tips and fun facts, a plastic bag filled with mushroom substrates and spores, and a tiny spray bottle. I particularly liked that the company included the spray bottle, because it’s not something I’d probably remember to get at the store. The little bottle also does a great job of producing a fine mist and is easy to use. That’s more than I can say for some of the ones that I’ve bought in the past.

However, you will still need a few more supplies:

It would be a good idea to have a plant saucer, an old towel, and/or rags to set the mushroom kits on, so that they don’t leak water all over the surface they’re placed on.

Setting Up Your Mushroom Growing Kit

As I opened each mushroom growing kit to get them started, I noticed that the white oyster mushrooms kit had already formed a film that coated the inside of the box. But I was still surprised at how fast the mushrooms grew. The instructions were very easy to follow. To reiterate:

Growing the Mushrooms: Part One

Four days after I placed the substrate back in the cardboard growing boxes, the white oyster mushroom growing kit was well covered in a very thick layer of white film. The pink mushrooms also seemed to be showing some growth, but they weren’t as visible. A day later, I noticed that the mushrooms had started to form heads. This was once again much more pronounced on the white variety than it was on the pink ones.

At this point, I moved the mushrooms from the floor of my room to the windowsill so they could get more natural sunlight and warmth. But the instructions say you don’t really have to do this until day seven. According to the brochure, moving the boxes to sunnier spots will allow the mushrooms to reach their greatest potential. They’ll be more brightly colored and much bigger (the key factor).

Five to seven days into the project, the white mushrooms were looking great. But the pink ones were still struggling. I scraped the substrate again, thinking I didn’t do a good job the first time, and gave it a good soaking with the spray bottle. Due to the hurricane-related craziness at my house,  it was a few days before I checked up on this.

The Almighty Google brought me to some information that stated that pink oyster mushrooms need subtropical temps and higher moisture to form large clusters. So I put them outside on the porch where the weather certainly was more to their liking than my house, which stays around 70 degrees. I also reread the directions that came with the mushroom growing kit and realized that I should have quit spraying them twice a day a few days earlier than I actually did.

After being put outside in better conditions, the pink mushrooms formed one decent cluster and turned a lighter shade. The problem was that they quickly shriveled up before the recommended production time had elapsed. So I didn’t get a chance to sample them. That was disappointing because I read somewhere that they taste like shrimp (possibly not true) and I love shrimp.

Meanwhile, the gray oyster mushrooms were numerous and large. In fact, the box they were in almost flipped over due to their weight before they were harvested on day 12. I used them in an excellent Shrimp Tortellini recipe that I’ve adapted to suit our family’s preferences.  (It’s very similar to this recipe.) However, I did sample some individually so that I could report on the flavor. It turns out that these mushrooms were well deserving of their name. They had a good, slightly chewy, and meaty flavor. The caveat here is they cook faster than portobellos and may burn to a crisp if you’re not careful.

The product instructions say the substrate can flipped to the other side and be used to grow a second batch of oyster mushrooms. I had a bit of problems with the set up the second time because the plastic liners got very ripped up when I tried to reuse them. And despite working on this portion of the project for a few weeks, I’ve only begun to see slight (nearly microscopic) progress a few days ago. I felt this was probably because I did a couple of the steps out of order and may have missed out on spraying them a time or two. So if a second batch is your goal, make sure to reread the instructions very, very carefully!!!

In terms of price, these mushroom growing kits are a tad more expensive than a DIY set up. On the other hand, you don’t have to hunt up all the pieces (substrate, spray bottle, mushroom spores) that you’ll need to get growing. They’re also easy to find at places like Lowe’s and Amazon. The mushrooms themselves typically run about $2 per ounce in the store. I got about enough gray ones to probably fill an 8 oz container and a handful of the pink ones. So if you can get two decent sets of mushrooms out of each kit, you probably will get your money’s worth.

However, I really think that the dual mushroom growing kit would be a great science fair project. Students who are interested in plants could see which variety they can get to grow better: pink or white. It would also be a lot fun as a project for a science or home economics class. So do the owners of the company! They will send a free kit to a teacher of your choice if you share your own pictures on your social media accounts. It’s yet another way to get more mushrooms for your buck.

These kits would be particularly great for classrooms with their own kitchens, because it would be great fun for students to watch these mushrooms grow and then eat them. (As long as they have no food allergies, of course!) A quick internet search revealed that oyster mushroom are typically pan-fried or cooked up in something like scrambled eggs or quiche. In fact, there are some really tasty looking recipes on the Back to the Roots Blog.So happy gardening and bon appetit!

More Info - via Back to The Roots