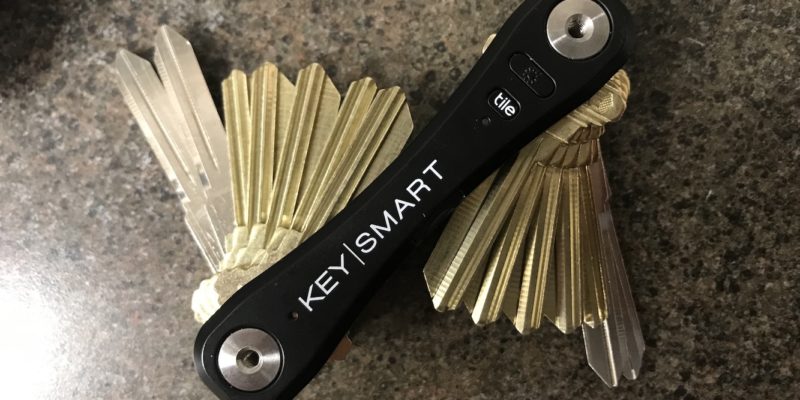 For those of us who struggle with that tangled mess of keys, that constant jing-jangle at the hip, or that sharp bite of keys in dress slacks, there’s finally an alternative worth changing out the old-school keyring: The KeySmart Pro. Developed in 2013 as a Kickstarter, this simple product has become a compact embodiment of the entrepreneurial spirit offering a baseline utility with massive customization potential.

The KeySmart Pro out of the package includes a series of cardstock spacers specifically designed to shim between keys, or allow for a balance if an odd number of keys is used in the setup. Two spacers equals the thickness of one standard key. This quickly became a cause for concern as they came off easily and were difficult to retrieve at times. They have potential to get lost, but are basic enough to be replaced with ultra-thin washers in a bind if you do lose some. Those you don’t use should be kept in case you give up keys, swap for new keys, or reconfigure the setup. I made it a point to set mine aside in a safe place so I can go back to them if my needs change in the future.

Similar, but somewhat more cleanly-designed than the CarboCage Keychain we previously reviewed, the smooth polymer outer sides are mated with a metal plate on the inside. The sides are separated by two hex bolts and a basic machine screw that can be turned with a coin or flat screwdriver. The screws are secured with rubber bushings that help prevent backing out during use. The unit accepts all forms of keys by resting them through the bolts and securing the outer sides with the two screws. 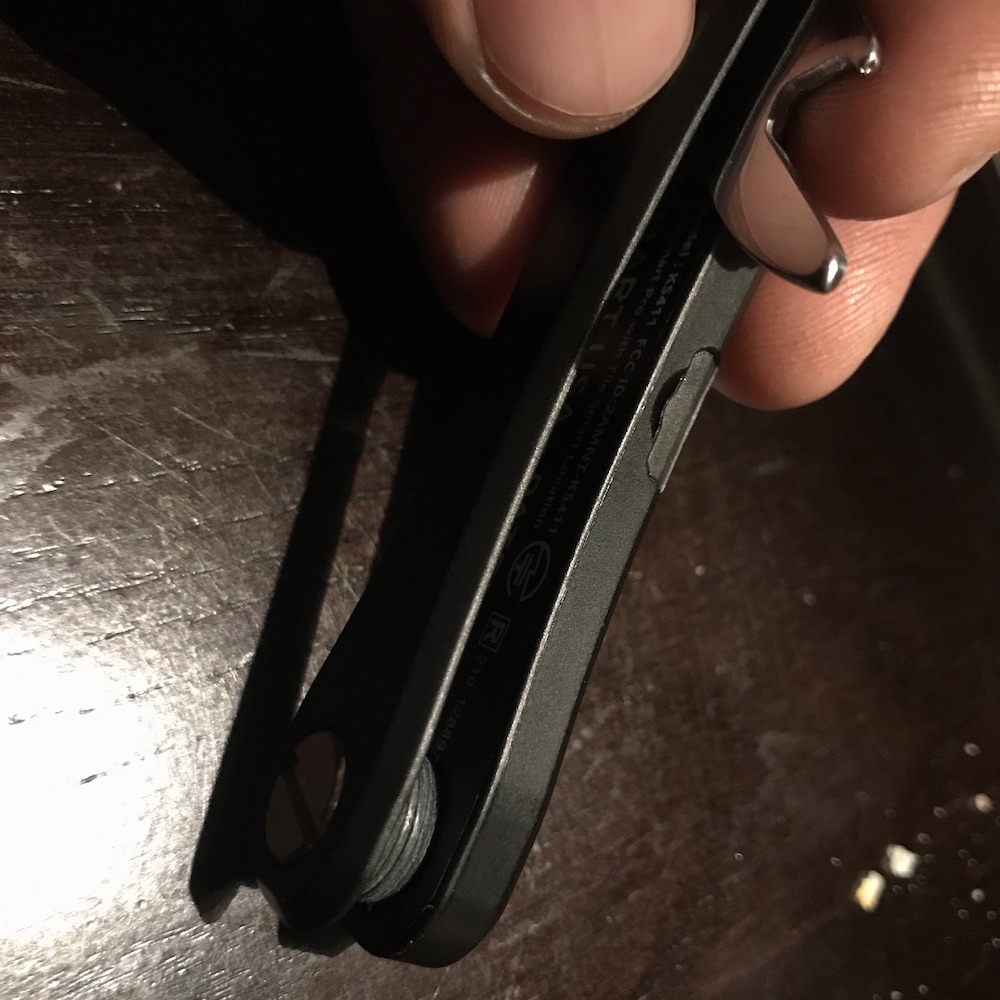 As I started tinkering with this setup, I couldn’t help but think of other options, and how it might be a great way to store that mess of keyring club cards that always seem to get destroyed. And when I got into the specifications, I soon realized how much thought and intention went into this handy tool, positioning itself very well as a smart alternative to my current key collection.

The symmetrical, compact design has the look and feel of a customizable Swiss Army knife. And, it’s about the same size. It may not come with a corkscrew or an awl, but it definitely creates a space for customization and utility above and beyond the standard key ring. Fully-packed, it feels natural in the pocket, less awkward than a bulky mess of metal, and roughly the same weight if not less. In some cases, the design limitations force you to rethink the important parts of your key ring and eliminate extras like rubber key silencers, other flashlights, etc. If weight is a critical concern, KeySmart offers lightweight anodized aluminum key blanks in place of the typical brass counterparts.

One design drawback is the impracticality of obscure or oversized keys. However, this can be avoided by duplicating keys with smaller counterparts. For example, I was able to have my factory coated truck keys cut to standard flat metal keys and they fit perfectly in the mix. High-torque applications take a little more caution, but typical cylinder locks in good working order are easy to navigate.

The KeySmart Pro is lightweight and compact without sacrificing quality. It is made of aircraft-grade aluminum and stainless-steel hardware. The lightweight plastic components are also durable, water resistant, and scratch resistant. I’m pretty hard on my equipment, so I generally put my gear through initial elimination testing right off the bat. It survived the 6-foot drop on concrete, then the 10-foot drop. I made a few
commando crawls while looking under the truck and it held up fine in my pocket without stabbing me in the process.

Each KeySmart Pro comes standard with room for 10 keys. Naturally, I pushed the threshold and was surprised that I was able to fit 14 industrial keys – but just barely. Instead, you can expand the system by getting the longer, 14MM screws to allow for 14 keys with enough thread to secure both sides with confidence. 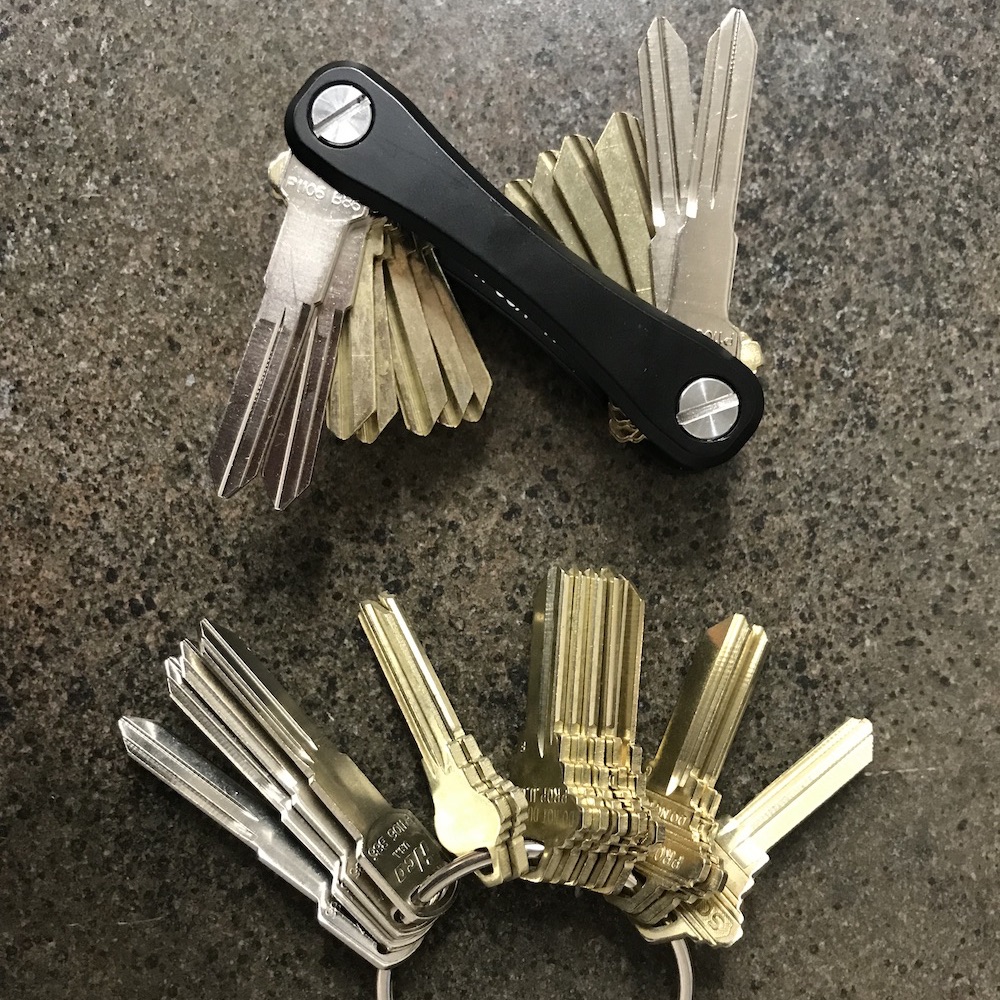 The durability of this system also lends itself to the longevity of your keys and locks. For anyone who has had to pack around upwards of 14 keys, you know how cumbersome, noisy, and inconvenient it can be at times. Less movement and abrasion on the teeth means your keys will last longer. And, reduced wear on keys means cylinder pins and springs move inside lock cylinders as designed and avoid damage from misuse or unintended shear.

There are a few main features that stand out instantly. Each KeySmart comes with a bottle opener and a built-in flashlight, rechargeable with a standard micro-USB cable. The flashlight isn’t the tactical self-defense, blinding, 2,000-lumen pocket flashlight – but it serves its purpose. The focused light is enough to see without alarming the entire neighborhood. It provides ample illumination and clarity, especially when the alternative is to find the doorknob by braille, then attempt to locate the lock cylinder.

Pro Tip: The flashlight is located on one end, so I recommend putting your main outside door key and vehicle key on that side.

Cell phone lights are almost too bright, take up the use of one of your hands, and could give someone the impression that you are a burglar when you are just trying to get into your own car or your own front door.

The bottle opener is a nice touch. I would prefer a sharper point for use as a can opener as well – more a point of personal preference. A machinist could come up with custom key substitutions for those common tasks that seem to require fine motor skills. While there are limited options for substitutions like the bottle opener, there are some useful add-ons, like USB storage, and other forms of small tools like folding knives, fire starters and the like. The bottle opener does have a backflip cutout that allows for additional rings, lanyards, vehicle keyfobs, or other things you might want to secure with a keyring.

The “Smart” in KeySmart Pro – The Internet of Things

Smart devices are all around and the KeySmart Pro with Tile is no exception. Once I got my head wrapped around the physical attributes and secured my keys, I took some time to look into the digital side of things. This is where some of the real value comes into play for this tool. Simply put, it has a form of two-way location. At first, I thought it was something that you could just ping with your phone and it would beep until you could hear it and unbury it from between the couch cushions. But when I put it to the test, I found it was far more than that.

First, to get started, I charged completely. A little tune chimed reminiscent of an 80s video game with a digital audio scale. The tones were easily recognizable as something vastly different than the typical ringtones we’re accustomed to. Once charged, it claims to be able to hold a charge for 45 days. This is another aspect I’ll be putting to the test and will follow up with a comment below.

While charging the KeySmart Pro, I downloaded the Tile app for my phone and signed in using Facebook. You can also create a separate account. Then, through a push-button sync sequence, the device pairs with your phone and the devices begin to track each other. Initially I thought it was a typo that I could find my phone with my keys – until I did it. I was amazed to say the least. When I realized if I had my keys, but not my phone, or if I had my phone but not my keys, I could potentially find either one by using the other. Mind blown! 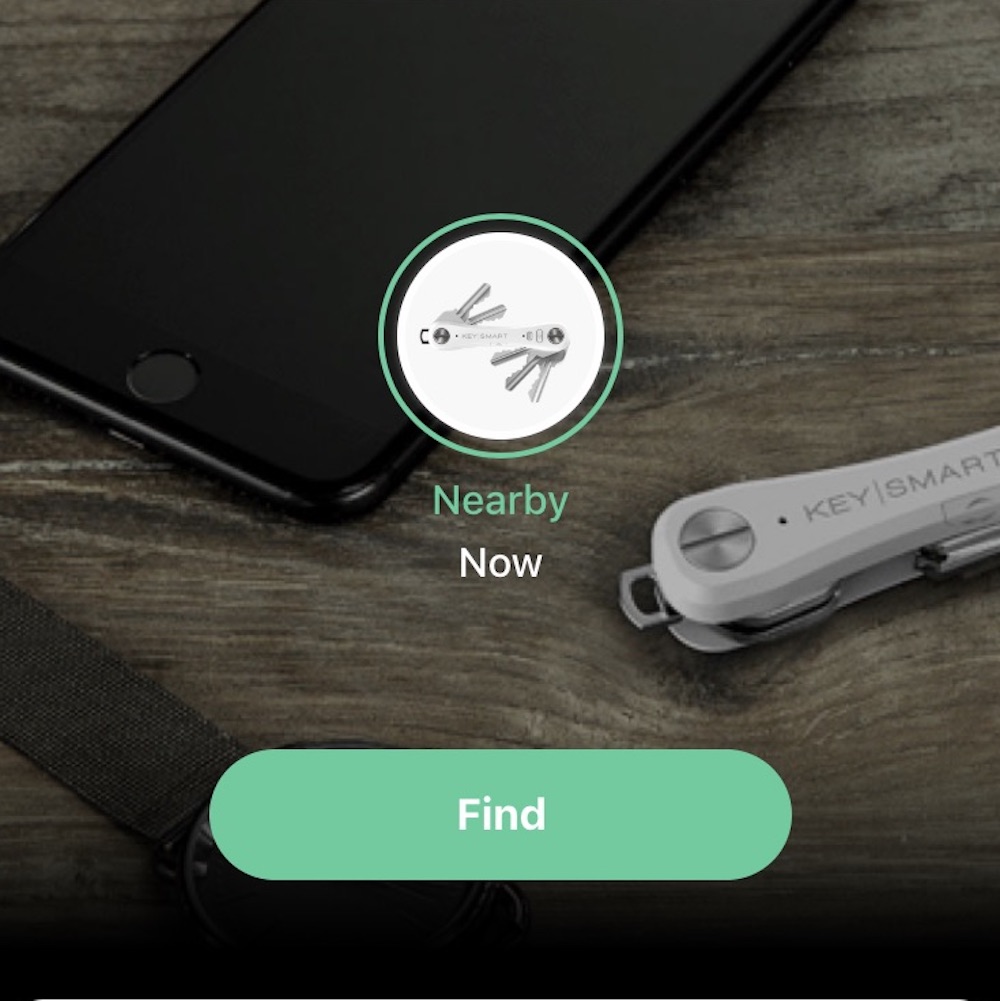 The digital signature is something you can share via email, contacts or direct web link to allow others to join in and help find your device – say if it is left at a friend’s house, grocery store, or other establishment. So, if you’re going Delta Force on a recon mission to find your lost keys, they’ll see what you see. Even Siri has an option to deploy a voice command to find your keys so you don’t have to scream your way through the house to find your keys on the way out the door. 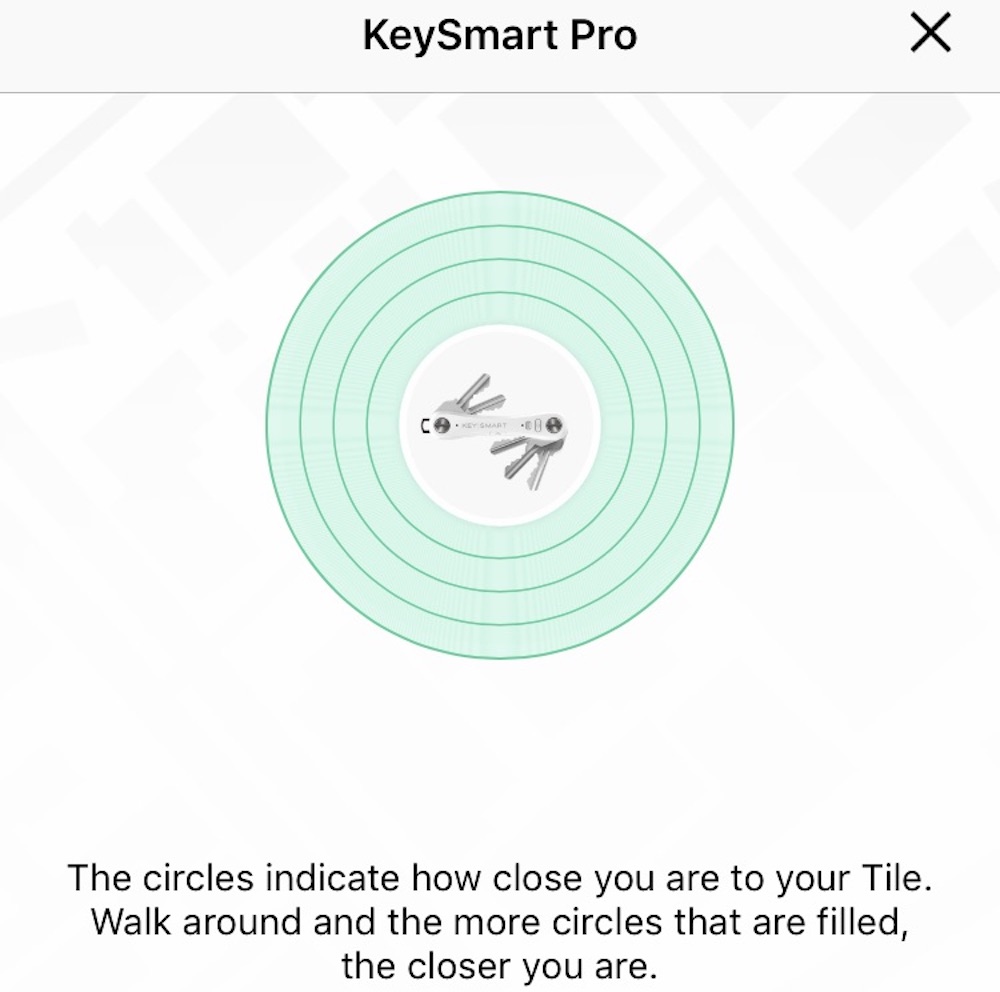 What’s more, the cell phone app uses a GPS signal to pinpoint your keys on a map that you can navigate to, and will provide a bullseye within 30 feet. As you approach and hover directly above your keys, the bullseye zeroes in on the source with a tone change. It is accurate to within a few inches. The utility of this system is exponentially greater when you consider that you can track multiple key sets on a single device.

Put To the Test 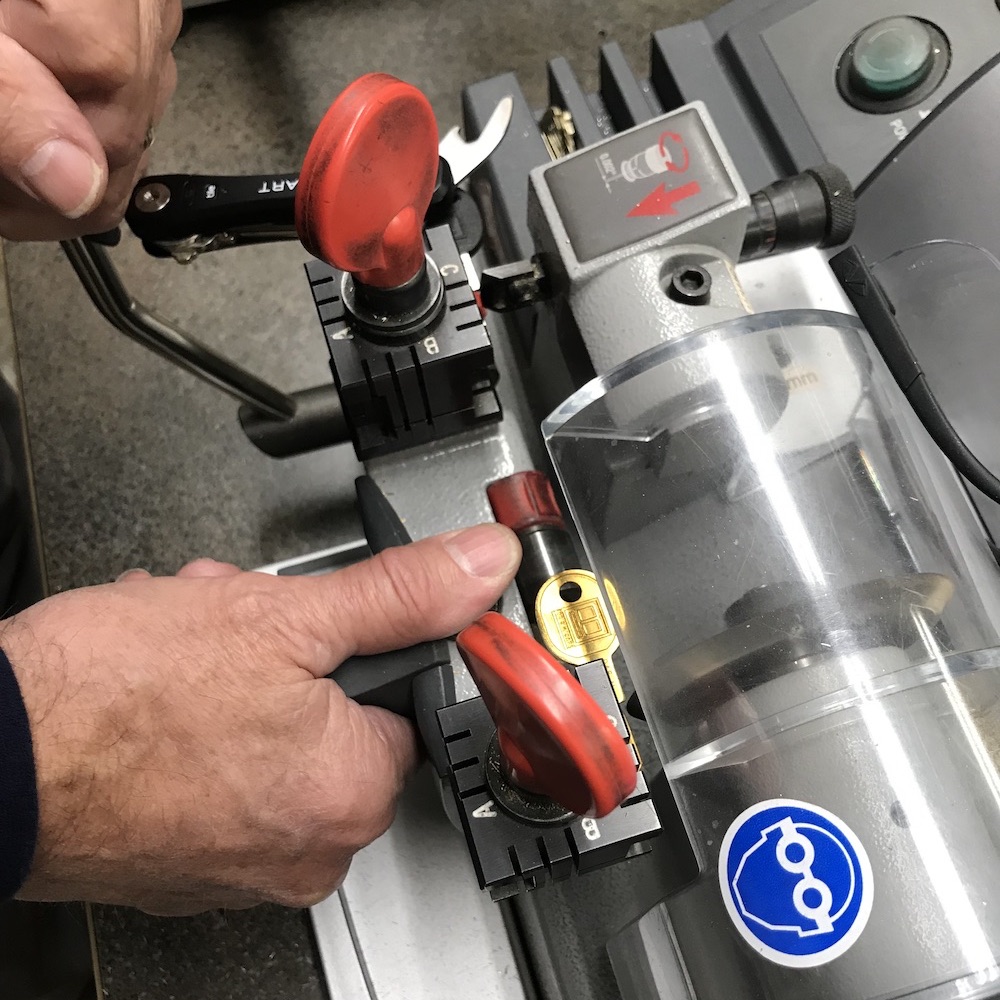 After my own exploration and learning curve, I couldn’t help but put this to the social test. I shared the KeySmart Pro with a locksmith and gave him the quick rundown. He helped to cut back my truck keys and was equally amazed at the utility and potential. When we tested out the capacity, we could see the side-by side difference in how compact the tool was compared to a series of keys on a ring.

I’ve found that my key set is easier to retrieve without catching on the cusp of my pant pocket. Plus, the keys are less accessible by feel, but more accessible by location memory. With the two sides, it’s easy to tell which keys are where based on how I configured them. For someone with a series of access needs, it is a no-brainer.

The silence and comfort have been an immense improvement since the day I opened the package. It is a simple improvement that has potential to make my life much easier down the road. 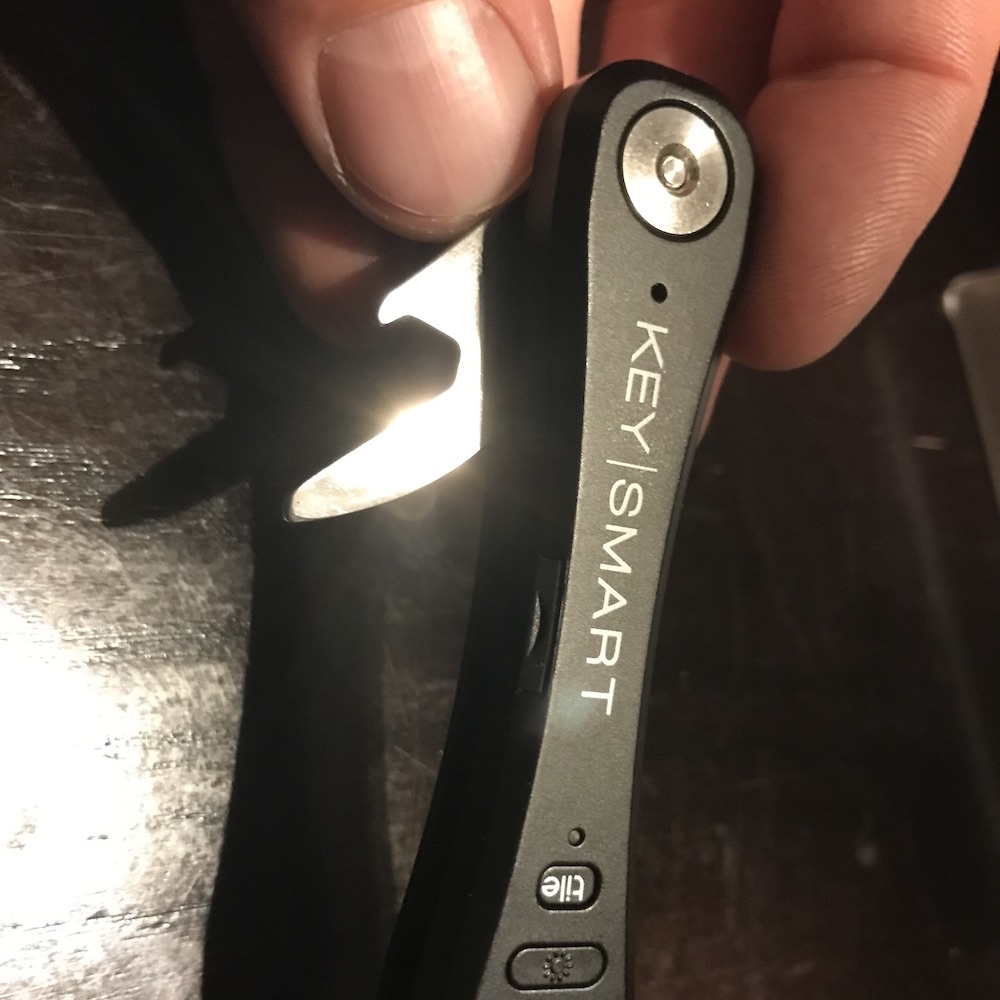 Overall, the KeySmart Pro is just that – Smart. It is a smart way to handle your access needs while taking into consideration utility, proximity, and durability.

The stock light and bottle opener features are handy tools that I’ve already put to use. Plus, I don’t have to seek out those tiny batteries for keychain lights or pull out my cell phone while I’m holding any number of large bulky objects while trying to get into a door. If you do prefer a series of keyring goodies, this helps to keep keys apart from that cluster.

Unless you’re a janitor, there’s not much reason to be packing 14 keys. For the average person a KeySmart is an ideal way to stay organized and reduce clutter and clanking in your pocket. Overall, it’s much quieter and helps to reduce noise while driving, walking, and fumbling for keys.

Finally, the unique design stands out in large get-togethers and key bowls. And if it does go missing, it’s easy to track down and retrieve. I’ve lost keys in the snow, or in piles of coats, or in countless forms of furniture. The tracking feature, combined with the extensive, useful customizations makes this tool something that is an ideal everyday carry item that’s hard to pass up. You can pick up the KeySmart Pro with Tile for under $60.