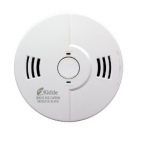 Two quick stories for you about why the Kidde carbon monoxide smoke detector with talking alarm is worthwhile:

Story 1: Ever realize that not all smoke alarms have a little button you can press to shut them off during a false alarm? I always presumed this was a regular feature until recently. Clawing desperately at the smoke detector as the smell of burning bacon filled the air (some may recall another bacon tragedy I’ve mentioned on HomeFixated sadly not involving a Generac Residential Generator), I did everything I could to get the dumb thing to stop squawking. I nearly tore my nails off trying to unhinge the cap from the base to disconnect / rip the wiring out. It wasn’t a rage-filled need to simply make the noise stop that inspired me tear at my alarm – it was the fact that I lived in a condo. You see, in a condo, when one fire alarm goes off in a unit for a period of time, the main system goes off. Main system = building-wide evacuation and the immediate dispatch of firemen … hot firemen (is there any other kind?). They’re the exact kind of man that I did not want walking into my messy home to see messy sweat pant-wearing me fixing a messy entrée of bacon to eat alone on a Saturday night. And no, I didn’t stop the alarm in time, so that exact scenario I described? Happened. Ugh.

Story 2: Ever realize that not all alarms that detect both carbon monoxide and smoke will tell you which one it’s detecting – it will just give off the same beep? An acquaintance of mine didn’t realize this either and also forgot his alarm detected carbon monoxide. When it when off, he poked around his place, didn’t see smoke, so pressed it off. When it went on again ten minutes later, he figured it was wonky and took out the battery. When friends showed up later that day, they teased him mercilessly for being so hung over. His protests that he hadn’t had anything to drink were brushed off until one of the friends – a girlfriend of mine who I adore but is a bit of an alarmist – consulted Dr. Google and determined that he had the avian flu. She was so certain that she actually got him to go to emerg that night. Turned out it was carbon monoxide poisoning. It’s probably the only story out there were the avian flu actually saved someone’s life.

With the Kidde Carbon Monoxide – Smoke Alarm Talking Alarm, both stories can be avoided in your home. First, it has that blessed “hush” button that lets you shut ‘er down if the alarm goes off because of non-threatening smoke – like the kind you get from little kitchen mishaps or the blowing out of candles from the birthday cake of any member of the Rolling Stones. You’ll also realize right away which alarm is going off – because it tells you in a human(-ish) voice. It will even start chatting with you when the battery starts to get low which is incredibly useful for keeping you and your family safe over the long term.

requires three AA batteries and is available at Amazon for a low $33. The hardwire interconnectable version

(when one goes off, others in the home go off) is also available at Amazon for $42 – something to consider if you have a larger house.