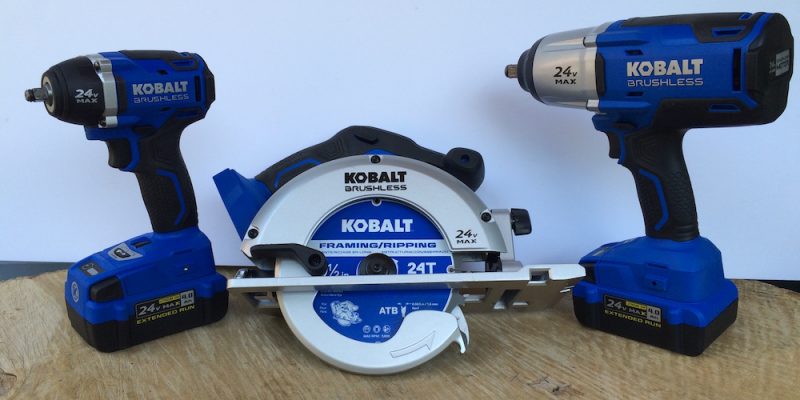 In a previous post, we took a look at a four-pack of the new Kobalt 24V MAX brushless tools. This totally new line of tools represents Lowe’s attempt to grab a piece of the higher-end tool market, and the new tools offer the robust design, increased power and features pros and serious DIYers expect. The new tools are competitively priced, and come with a stellar warranty; more on that later. Lowe’s provided us with samples of their new tools to evaluate, so we’ll take a look at the final three offerings in the current lineup.

In round two, we’ll check out the Kobalt 24V MAX cordless circular saw, their 3/8” impact wrench, and the Papa Bear ½” impact wrench. While I have crazy circ saw skills, an impact wrench isn’t part of my normal remodeling tool selection. I know, call me crazy… Luckily, I know a guy. This guy owns a tire and auto repair shop, and he and his mechanics are intimately acquainted with impact wrenches. They graciously agreed to treat both Kobalt 24V MAX impact wrenches to a day in the life of a mechanic.

My experience with impact wrenches is pretty much limited to air tools. I’ve used them in the garages and shops of mechanically inclined friends, but never done enough wrenching to justify making the investment. Since we just bought an old tractor for our farm, I have an uneasy feeling that I’ll be getting quite a bit more use out of my assorted mechanic’s tools.

My first impression of the Kobalt 24V MAX ½” impact wrench? Beefy and heavy. For a wrench packing 650 ft./lbs. of torque, heavy pretty much comes with the territory. The tool is comfortable, though, and feels good in the hand. The controls work well, too; the variable-speed trigger operates smoothly, and the tool has a push-through switch to change between forward and reverse, with a lock-out in the center. It’s placed up high enough that it doesn’t get accidentally bumped out of position, a problem I’ve had with other tools in the past.

As I mentioned, I very seldom need to use an impact wrench. I used it to break loose a couple of the lug nuts on my truck, and it breezed through the task, but I wanted to get the opinion of someone who plays with these things on a daily basis. These guys have many thousands of dollars invested in tools, and are used to tithing to Snap-On and Matco, so they’re a pretty tough audience. I dropped the wrenches off, and came back a couple of days later. Here are the Notes from the Pros…

The guys at the shop tested the wrench on a variety of vehicle bolts that routinely are removed during vehicle inspection. They said the Kobalt 24V ½” impact wrench works well with shallow sockets, and works well for removing and installing lug nuts, although it struggled a bit on about 1 out of every 10. They said the battery, while a bit bulky (the 4.0 Ah version), is easy to install and remove, and holds a charge well.

They wondered how much abuse the impact wrenches could withstand in shop conditions, thinking it might be best suited to use in a home shop or for a mobile repair mechanic. Their final thought was that the light would be better positioned around the anvil, instead of on the battery mount pointing up.

The Kobalt 24V MAX seems like a pretty substantial tool to me, and the price sure seems like it would be an attractive option. A Snap-On 18V impact driver with 600 ft./lbs. of torque goes for $400, and that’s for a bare tool with a one-year warranty. The Kobalt model comes with a battery, charger and carrying case, and has a five-year warranty. Hmmmm…

Mechanics don’t always need – or want – the massive torque of the ½” drive impact wrench. For removing valve covers, water pumps, alternator brackets and the like, a 3/8” wrench brings more than enough oomph to the task. And the 3/8” Kobalt 24V MAX impact wrench is a WHOLE lot lighter than its ½” brother.

Here are the specs on the Kobalt 24V MAX 3/8” Impact Wrench:

The 3/8” impact wrench has a Finish feature, similar to that found on the Kobalt 24V MAX impact driver. This feature is great for those hard chargers out there who don’t let up on the trigger until the fastener head welds itself to the item being bolted, or until the head snaps off. When the fastener is almost tight, the Finish feature takes over. The tool delivers a very short burst of tightening torque, around a second or so, every time the trigger is pulled, until your fastener is snugged up just the way you like. The feature is switched on by depressing a button on the base; it turns off after 15 minutes of being ignored, or when you press the switch again.

Back To The Tire Shop

So what did the guys from the tire shop think of the Kobalt 24V MAX 3/8” Impact Wrench? They liked its “great power.” They didn’t like the big (4.0 Ah) battery, saying that it made the otherwise compact tool too bulky. They commented that a 2.0 Ah battery would make it lighter and easier to maneuver. The Kobalt 2.0 Ah 24V MAX battery is quite a bit more svelte, and for $20 a pop, a helluva bargain to boot.

They were uncertain whether they’d use the finish function, since they’re more accustomed to using impact wrenches for driving bolts, not screws. Seems to me that once you get used to the idea, it would be helpful to keep from overtightening valve covers, water pump covers, etc., or for lag screws on decks and the like.

After I got the Kobalt 24V MAX 3/8” impact wrench back, I decided to give it a home-style workout, I grabbed a 5” long, 3/8” diameter lag screw and introduced it to a piece of seasoned maple I haven’t gotten around to splitting yet. The wood was pretty dense, and I didn’t pre-drill, but the screw steadily disappeared. The log was smoking by the time the screw was buried, but the impact wrench was fine.

But enough wrenching commentary; let’s cut something! Battery powered circular saws have been around for awhile, and most of the major tool brands have an offering in the category. The results range from pretty feeble to pretty impressive. So how does the blue circ saw stack up?

The Kobalt 24V MAX Circular Saw uses a 6-½” saw blade, but the tool’s design gives it the same depth of cut as a 7-¼” blade, at 2.44”. The brushless motor combines with the 24V Li-Ion battery to spin the blade at 5,400 RPM, and a spindle lock makes it quick and easy to change blades. Here are the specs from Kobalt:

The saw has a good heft to it, and looks and feels well made. The adjustments are pretty standard; depth of cut can be set using a flip-up lever near the rear of the saw, and bevel is set by rotating a locking knob near the front. Once set, the adjustments are firmly locked in. To operate the saw, you have to depress an ambidextrous push-through switch above the trigger. This is a necessary safety feature for a tool that is “live” whenever there’s a battery in it.

The saw has a substantial aluminum shoe, and comes with a 24-tooth narrow kerf blade. There is a slot for a rip guide, but the saw doesn’t come with one. The guide isn’t something I often use, but if you want one, it looks like a pretty standard size. A notch at the front of the shoe serves as a blade guide, and I found it to be very accurate.

When it’s time to change that 6 ½” blade, a spindle lock makes it easy. The Allen wrench needed to remove the blade lives on the side of the handle. It fits very securely, so as long as you put it back when you’re finished, it will be right there for you next time.

When the Kobalt 24V MAX Circular Saw arrived, I was getting ready to build a bulkhead to cover some raggedy wall space above where some new kitchen cabinets were to be installed. We used the saw to make all the cuts in the 2X4” framing. It did fine, making all the cuts without bogging down.

I then tried it out on a couple of 2X4s screwed together. I first tried making a rip cut along the length of the boards, with the blade fully buried in the wood. The saw struggled a bit, and after about 2′ the overload circuitry shut it down for a couple of minutes. (Note: When this happens, the LED light flashes quickly to let you know what the issue is).

Once it had cooled down, I started making cross cuts instead, cutting completely through the top board, and about halfway through the lower. The saw was much happier making this type of cut, even though the blade was once again fully buried in the wood. I made a lot of cuts, and the saw never stalled out.

Making cross cuts, like I did when building the bulkhead, is the best approximation of how this type of saw is likely to be used; making fully buried rip cuts is a pretty extreme trial, and nothing you would ever do in normal usage.

All in all, I was pretty impressed by the new Kobalt 24V MAX lineup. The tools all seem pretty robust, and with their brushless motors and Lithium-Ion batteries, they have the power and capacity to get a good bit of work done. Kobalt is committed to their new line of 24V MAX tools, with three more tools due out soon: A hammer drill, an oscillating multi-tool, and a grinder.

Are they going to convince die-hard Red, Yellow and Green users to make the switch? I’m guessing a lot of contractors and serious DIYers will give them a good look, especially given their incredible warranty. Lowe’s is offering an unheard of one-year, no-questions-asked warranty on all their 24V MAX tools, along with a five year limited warranty on the tools, and three years on the batteries. The tools are very competitively priced, and the batteries are a bargain. The ability to try out the tools risk-free for a year means you’re likely to be seeing a lot more Kobalt Blue on the job. 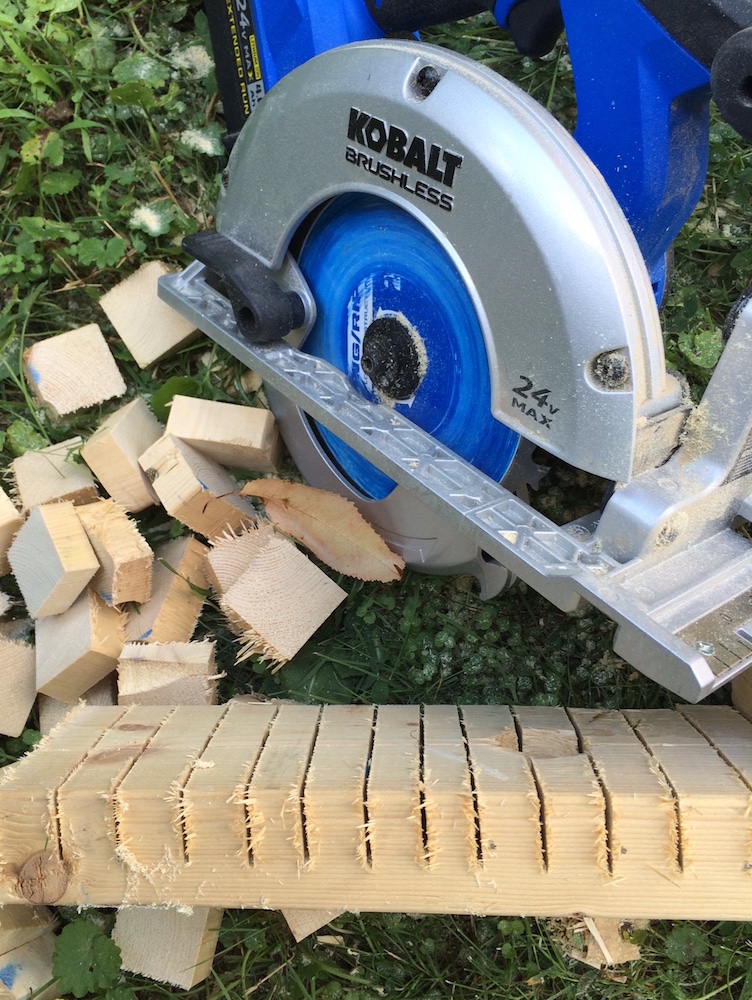 The Kobalt 24V MAX ½” impact wrench is available either as a bare tool for around $169:

or in a kit that includes a 4.0 Ah battery, a charger and a soft carrying case for around $249: