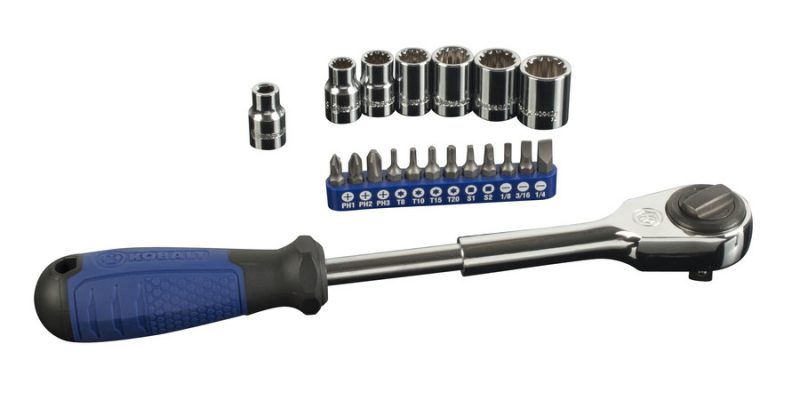 If we could go back in time to 1988, you’d probably find me playing Double Dragon at the local roller skating rink. Today, I still enjoy my fair share of video games, but now I’m more into tools. So when HomeFixated’s MC Marc asked me to take a look at the Kobalt Double Drive Ratchet Set graciously provided by Lowes eons ago, the first thing that popped into my head was Double Dragon the video game. What’s really great about my Double Dragon reference is that the Kobalt 20 piece Double Drive Ratchet kind of looks like the pipe “Hammer” or “Spike” used to beat the crap out of the bad guys with. So, I armed myself with my marvelous melee weapon of mayhem and began to write a karate-fueled review about this cool new tool. But best of all, if it doesn’t work, I can always use it to fight my way out of a street brawl just like the Double Dragon duo of death. The HomeFixated legal team just mentioned I should remind you that we don’t recommend weaponized usage of these tools, regardless of your Double Dragon training.

Not everyone likes new concepts in tools. Tried and true and all that jazz; blah, blah, blah. But I look at it like this: the simple lever-style can opener wasn’t invented until almost 50 years after the tin can. There’s always some way to improve upon the most mundane of inventions.

So that’s the way I looked at the Kobalt Double Drive – with eyes wide open. Not to say I wouldn’t look at it with a bit of skepticism. I certainly scrutinized it from tip to toe. But before I tell you what I found out about it, let’s hear what it actually claims to do and what it comes with:

Once I picked it up, I found that it has some solid weight and fits my hand well – great for street fighting, errrr, I mean safe wrenching. The whole concept behind the Kobalt Double Drive seems to be the rotating handle, not just for beating poorly pixelated criminals. Just rotate the handle one way or the other and it turns the socket driver in one direction. Turn the directional switch in the back the other way and the wrench spins in the other direction. Of course, it still functions like a traditional ratchet as well. I fiddled with it quite a bit before actually using the device. But all that cranking seems to be more trouble than what it was worth and I was curious as to see how much torque I would need for various nuts and bolts.

So I put it to the test. The first thing I did with it was crack loose my circular saw blade to see how easy it was to use this unknown, yet familiar looking tool. I placed the Double Drive against the bolt on my circular saw blade and gave it a turn. And another. And another. It was on their pretty tight!  After quite a little struggle, it broke free with a hard turn of my wrist. I flipped the switch and retightened the blade. I turned on the saw gave it a little cutting test. The blade was loose and slipping so I had to snug it up the old fashioned way – by turning my whole arm and not just rotating the handle with my wrist. My suggestion is to use the Double Drive Ratchet rotate function strictly where you don’t have clearance to swing the handle, and for nuts and bolts that are already loosened. If you have a bolt that’s on tight, you’ll naturally want to take advantage of the torque you get using it traditionally.

The Double Drive Screws Too!

That sounded dirty, sorry. I thought turning tight nuts and bolts free by twisting my wrist was kind of against physics, and I was right. It was tough to loosen and tighten bolts that way. So I thought I’d stick to using the provided bits to loosen up a few screws under a table I have been working on.

Once I found the right bit and put it under the table without looking, I turned the handle until it caught purchase on the screw bit. With a little force it turned and I had the screw loose in no time at all. Great success! 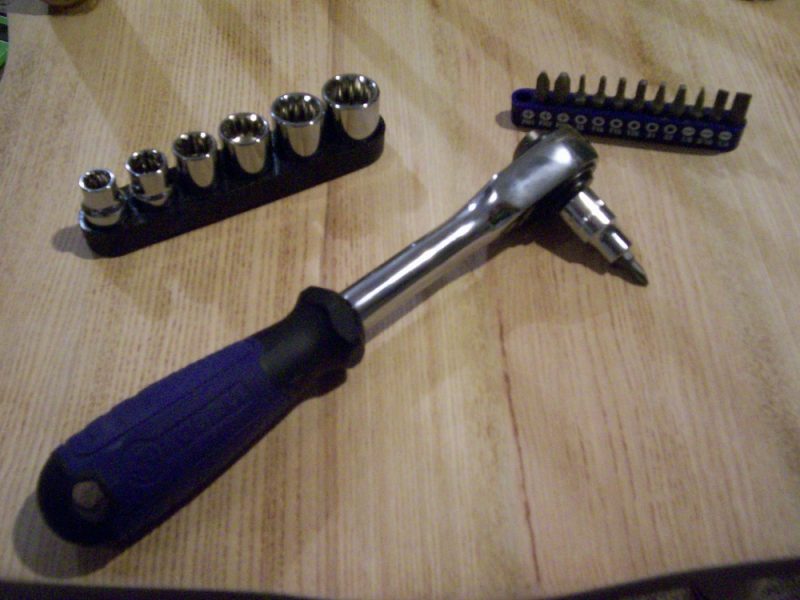 It’s a pretty solid tool that has some neat design features and can be really helpful in some situations. It works great in tight spots but doesn’t quite have the torque that using your elbow grease does, but thankfully the tool gives you both options. At around $20 on Amazon, the Kobalt Double-drive 20 Pc Set # 0409432

is well worth the purchase if you like to buy specialty tools or you need a new socket wrench for tight quarters. As a tool that is useful for everyday nut, bolt and screw removal, it works well for that too.