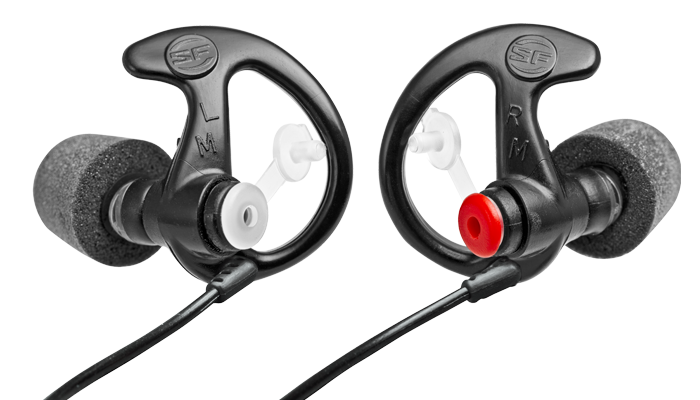 If you’re young, carefree and don’t appreciate the value of your hearing, you might want to spend some time talking to (shouting at) a grandparent who’s hard of hearing. Or, better yet, talk to someone in their 40’s who has trouble hearing because they spent too much time at Bon Jovi concerts, or working with power tools and weren’t aware of the importance of hearing protection. I definitely have valued my hearing in recent years, but I also hate most earplug options. The earplugs with little rubber flanges always slip out resulting in a NRR rating of zero, and the foam plugs you roll up and let expand in your ears leave me feeling like I’m entombed in my own head and oblivious to human interaction. I have used a lot of different earplugs, but over the last year I’ve been testing what I feel might be the best accessible and affordable earplug solution on the market, the SureFire Sonic Defenders. 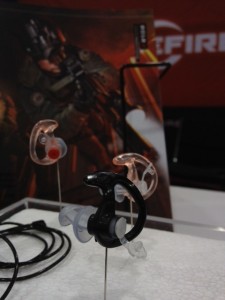 A little over a year ago I was attending the 2012 National Hardware show. One of the things I like about the show is I never know what cool product I might uncover. I stopped by the SureFire booth and expected to wowed by their cool flashlights. If you’re not in law enforcement or the military, you may not know that SureFire makes some of the nicest tactical flashlights around. At the booth, I was surprised to see what looked like little black hearing aids on display. I asked them about the product and was really impressed with what they claimed their new Sonic Defenders hearing protection could do. I was particularly intrigued with filtering technology they said would let human speech through while still blocking harmful noises. All with no batteries or bulk. I left the booth with a couple samples which I was looking forward to trying out. Check out SureFire’s promo vid before reading on about my experience testing these out. It features the subtle contrast of a charming spokesperson interspersed with assault weapons fire and grenade blasts:

Over the course of the next few months, I tested the plugs mostly in home improvement / power tool scenarios. I liked the way they felt and functioned, but for whatever reason, my ears just aren’t designed for the flanged or ridged plugs. Like other similar products, they kept slipping out of my ears, thus defeating the purpose of wearing them to begin with. I contact SureFire with my issue and they let me know they had recently released a foam-tipped version called the EP7 Sonic Defenders Ultra, which they promptly shipped my way.

It was at this point I fell in love with the Sonic Defenders product. Well, at least as much as you can love a pair of earplugs. The EP7’s were easier to insert than most foam earplugs thanks to a short foam length. They also didn’t take minutes to expand into the ear canal as some other foam designs tend to. Like several of the Sonic Defenders filtered models, the EP7 have small openings which you can seal with attached filter caps. SureFire describes the filtering technology like this:

EP7 Sonic Defenders Ultra protect your hearing without interfering with your ability to hear routine sounds or conversations. Their foam-tipped stem design, featuring soft memory-foam Comply™Canal Tips, fits most people and provides a Noise Reduction Rating (NRR) of 28dB. Sounds, at safe levels, are allowed to pass through into the ear canal, while potentially harmful noises (above 85dB) are reduced via a proprietary design that incorporates a special noise-reducing filter. EP7s include attached filter caps, which can be inserted for additional protection and blocking out lower-level noise, like that heard on a plane, in situations where hearing ambient sounds or conversations isn’t critical.

I recently put the filtering technology to what might be the ultimate test: a recent Milwaukee Tool media event. Like most tool-related media events, it was a combination of loud power tools in action combined with product managers enthusiastically talking about their tools. I spent the first hour or so of the event without using any hearing protection since I wasn’t trying out anything particularly loud right off the bat. I then put in my SureFire EP7 earplugs (with the filter caps open) and was amazed with both what I heard and what I didn’t hear.

The EP7s seemed to somewhat magically filter out the sometimes very loud background (and foreground) power tool ruckus. They tamed Sawzall torture tests, circular saws tearing through LVL beams, and impact drivers powering through telephone poles. Even more impressively, I was actually able to hear the Milwaukee product managers talking about their tools. In fact, I actually felt I was able to hear them better with the earplugs in since the Sonic Defenders did such a great job filtering out the louder noises their voices were competing with. If I had been in a commercial environment where hearing speech or other low-level sounds wasn’t important, I could have left the filter caps in to maximize the noise reduction. Their performance under some pretty extreme conditions was very impressive.

The Sonic Defenders are made with a soft, hypoallergenic polymer which I found comfortable to wear for long periods of time. Normally about 10 minutes into wearing foam plugs I want to rip them out of my ears, throw them on the ground, and stomp on them. That wasn’t the case with these. SureFire also color coded them (Red = Right), which is important since their EarLock retention rings are designed for a specific side. The retention isn’t some giant hook that goes over your ear like an early bluetooth headset. Instead, it’s a subtle loop that gently conforms to your outer ear and keeps the earplugs very securely in place. Apple should have considered this design when they first released their iPod earbuds that would never stay in. The whole Sonic Defenders design is very small, and can easily be worn under helmets, beanies, masks, or even earmuffs if you want to double up on the protection. Size Medium fits most people including me, but they have small and large available if you have mouse or Dumbo-style ears. Most models are available in clear, black or orange, and they include a little removable lanyard if you want to let them hang around your next when not in use.

Over the years I have used a lot of different earplugs at shooting ranges, in various tool-related events and on home remodeling projects and the Sonic Defenders were by far the best performing, most comfortable and most sophisticated earplugs I have ever used. Many people are content to use the disposable plugs that come in barrels of 1000 pieces, looking delicious neon candies. If you’re looking for something more versatile, more comfortable and you don’t mind spending a little to get it, I highly recommend the SureFire Sonic Defenders. . . they make a fantastic addition to anyone’s Personal Protective Equipment arsenal.

You can find the Surefire Sonic Defenders Ultra Earplugs

for around $18 a pair on Amazon. Although those are my personal favorite, you can also find the Sonic Defenders on Amazon