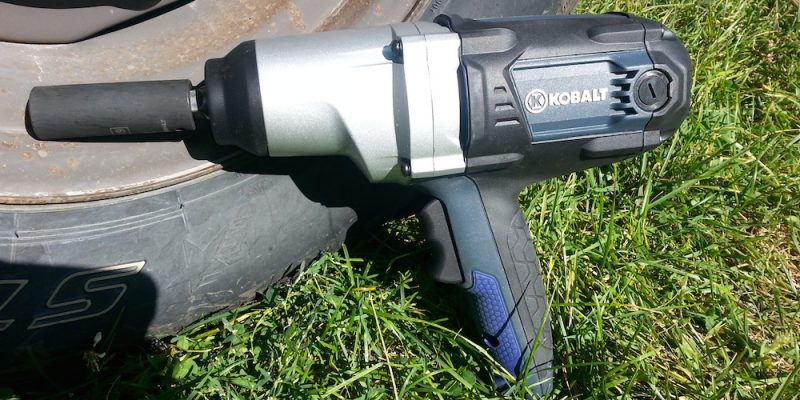 I have a small shop, and in that small shop I have a small compressor. For the woodworking side of the shop, it is plenty big enough to run finish nailers and staplers. But, for those occasions when I want to work on a rusty old farm implement or rotate the tires on my ancient Chevy Blazer, I borrow my buddy’s pneumatic impact wrench. It works okay, but my poor little compressor really can’t keep up with that mondo air tool. I have long considered buying an electric impact wrench for those occasions, but have always heard from friends that most models on the market fall short in the power department. Recently, HomeFixated was sent a new Kobalt ½” model to take for a spin, and I was pleasantly surprised at the power it packed.

Kobalt Tools, for those who aren’t familiar with the brand, is the house brand of the Lowe’s Home Improvement chain. I have always been impressed with the quality of the Kobalt tools that I have looked at while browsing the local Lowe’s, but haven’t actually spun any of their power tools before. Unpacking the impact wrench, I appreciated the minimal packaging that wrapped the sturdy hard carrying case. Inside the case I found a beefy looking tool, along with a seven piece starter set of nice quality impact sockets.

The tool itself is HEAVY (weighing in at over 8 pounds) with an 8 amp 120V motor onboard, but I found it nicely balanced for a tool of its size. It has a big…like REALLY big… rocker switch trigger, which takes a little getting used to. Reverse is on top, where your index finger rests, and forward is below, where your middle finger rests. It makes sense though, since this is a tool for taking things apart more than putting them together, but for a guy so programmed to using a standard cordless drill with a forward/reverse switch, I struggled a bit to remember which way I was going.

In terms of power, it broke loose the rusted lug nuts on my Blazer without breaking a sweat. It packs 350 ft/lbs of torque, and 1700 IPM, which is a lot less than my buddy’s air wrench, but for my needs, it is really nice. It might not spin the giant nuts on his earth moving equipment, but for basic auto and tractor repair, it is a solid contender. 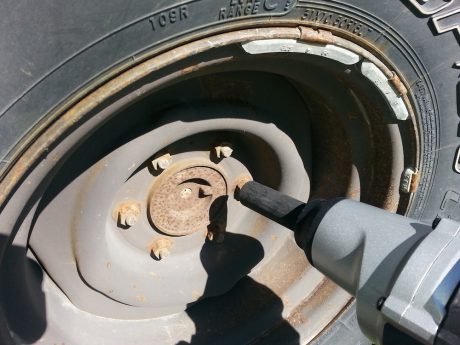 It was easy enough to operate with one hand, and the 12 foot cord and blue power indicator light are nice extra features. Nothing says “el cheapo” like a skimpy, short cord! No other bells and whistles on this tool, but it doesn’t need them. For the price (about $139 at the time of this article), the Kobalt is a real brute.