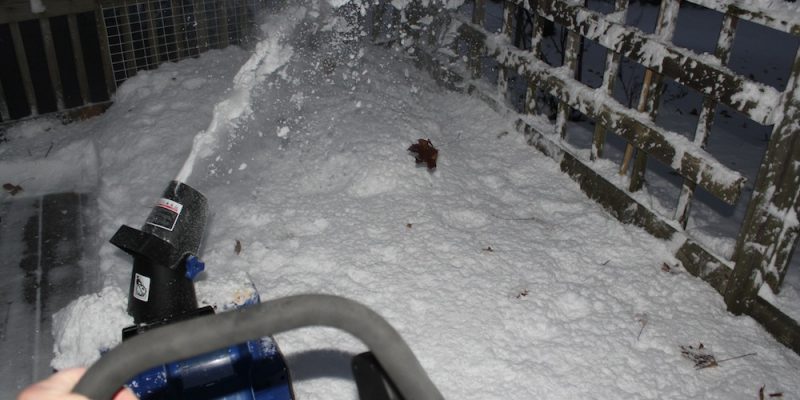 Winter is nature’s way of saying, “Up yours.” Anyone living in the snow belt (aka the “persistent snow band”) can probably relate to that quote from author Robert Byrne. We have a small farm south of Erie, PA, where the average annual snowfall, compliments of the lake-effect, is 120.5”. Mother Nature talks to us a LOT. Actually, I think the snow is beautiful, especially when I can hang out by the woodstove and enjoy it. Every so often, though, life intervenes, and we actually have to leave the house, which necessitates relocating some of that beautiful snow. Although shoveling 120.5” of snow is really good exercise, at some point it just isn’t that much fun any more. Recently, the folks at Snow Joe provided us with an alternative, in the form of one of their Snow Joe Ion snow blowers. Since Marc lives in San Diego (average snowfall 0”), I was elected to test it out for the review.

The Snow Joe Ion is a lightweight snow blower, powered by a rechargeable 40-volt Li-Ion 4 Ah battery. Here are the specs from the Snow Joe website:

The Snow Joe Ion was simple to set up; it took me less than ten minutes. First, just pop all the pieces out of the box, which is roughly a 2’ cube. Plug in the charger, and slide the battery in to get it charging; a full charge takes roughly 2-½ hours. The handle is folded in half; just straighten it out, and flip down a lever on each side to hold it in position.

Next, slide the handle onto the snow blower body, insert a J-bolt on each side, and tighten up the handle knobs.

Now position the deflector over the chute, and insert the two bolts to hold it in place. Be sure to put the gasket in between the chute and the deflector, and tighten up the knobs. When the battery is fully charged, slide it into its compartment, and slide the safety key into the adjacent slot. And that’s it—you’re ready to blow some snow!

The snow in the driveway wasn’t very deep. The 100 M.P.H. winds out of the west (well, that’s what they FEEL like) blow the snow around a lot, and much of ours goes right across the open fields and into our neighbor’s yard (sorry, Ed). There was a good 6” covering on the deck, though, so that became the first testing ground for the Snow Joe Ion.

To start the Snow Joe Ion, you just push the safety switch button near the top of the handle. While you’re holding it in, just pull up on the switch bar lever under the top of the handle, similar to those on many lawnmowers. After about a one-second delay, the blower fired up, and off we went. By the way, this thing is QUIET! If you’re an early riser, you can get your snow clearing done without having to wait for your lazy, cranky neighbors to get up!

The snow was wet and heavy, but the Snow Joe Ion chewed a nice, clean 18”-wide path through it. If I tried to go too quickly, it started to bog down a little, but as soon as I backed off and slowed down it was fine. The manual says the Snow Joe Ion can throw snow up to 20 feet. With light, fluffy snow, maybe it can. With the wet, heavy stuff I was going through, it threw it anywhere from eight to twelve feet, which was far enough to get it off the deck.

I have to admit, I was skeptical that a 32-pound battery-powered snow blower could do much of a job with several inches of snow. I figured that even if it did move it, there’d be a layer left on the ground. Between the rubber blades and the scraper bar, the Snow Joe Ion did a very impressive job of cleaning the deck off, right down to the wood. I had the deck cleared in about 10-15 minutes, and there were still two out of three bars left on the battery charge indicator.

Is The Snow Joe Ion Right For You?

I was much more impressed with the Snow Joe Ion than I expected to be. The initial setup was fast and easy, it’s very simple to operate, and it did a great job of clearing 6” of wet, heavy snow. It’s so easy to get into action, compared to a gas-fired or corded electric snow blower, it should make you less likely to utter unpleasant comments about the weather. It is very lightweight, making it a good choice for anyone with limited strength. It’s also very compact; when you’re finished with it, the handle can be easily folded down for storage or to transport it to your next snow-clearing adventure. There’s also a built-in carrying handle, and the Snow Joe Ion can even be hung on a wall in your garage or shed.

The downside? If you have a big area to clear (our farm’s driveway is 750’), or frequent deep, wet snowfalls, the Snow Joe Ion will be a bit out of its league. Since the battery takes 2-½ to 3 hours to charge, your snow clearing might take a bit longer than you’d like, if you can’t get it all done in one outing. I’m guessing that the Snow Joe Ion is at its best on fresh snow; when snow sits and gets compacted, it can be a bear to get through.

For those with less challenging applications, the Snow Joe Ion would be a great option. I can’t wait to try it out on our home in Pittsburgh, which is NOT located in the persistent snow band, and which has a MUCH shorter driveway and sidewalk. I will update this when I’ve had a few more snow-clearing opportunities. The Snow Joe Ion comes with a full two-year warranty, and a 30-day money back guarantee. It has solid reviews on both Amazon and the Snow Joe website, and retails for $399. 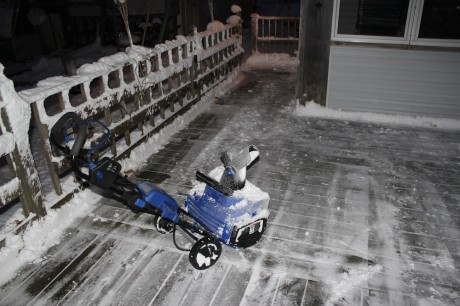