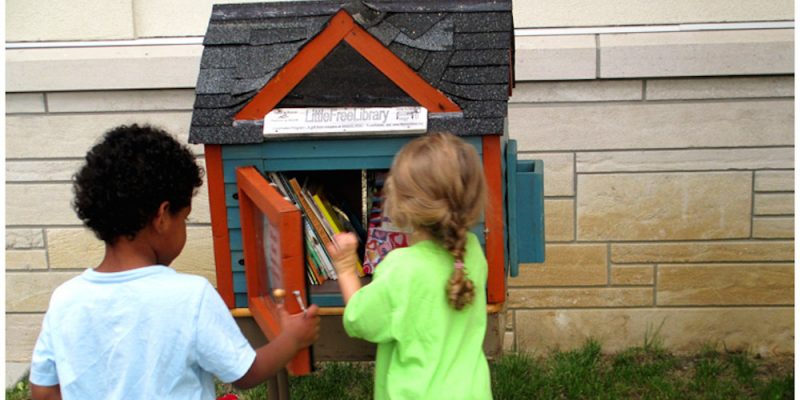 Last summer, I ran across an article about two poets who were riding a tandem bike from Boulder, Colorado to Beloit Wisconsin. Along the way, they stopped in communities and helped build “Little Free Libraries.” These little kiosks, not much bigger than a rural mailbox, are designed to house a rotating collection of free books. The motto of the Little Free Libraries is “Take a Book, Return a Book.” Free books and creative carpentry. What could be better?

The two poets, Amy Tingle and Maya Stein (from Nutley, New Jersey) have done several of these literary bike tours in the last few years. They passed through my hometown, Mt. Vernon, Iowa in June, and a block party was held to christen the town’s new Little Free Library. After doing a bit of research, I discovered that there are thousands of Little Free Libraries all over the country, and more going up all the time!

The movement began in 2009 in Hudson, Wisconsin, a small town just across the river from St. Paul, Minnesota. Todd Bol built the first prototype as a tribute to his mother, a former school teacher. He filled it with books and put it on a post in his front yard. He later teamed up with Rick Brooks, a youth and community development educator from the University of Wisconsin-Madison, and the Little Free Library project was born. Little Free Library was officially established as a Wisconsin nonprofit corporation with the mission statement “To promote literacy and the love of reading by building free book exchanges worldwide, and to build a sense of community as we share skills, creativity and wisdom across generations.” Their goal was to build 2,510 Little Free Libraries – as many as Andrew Carnegie – which they blew past in 2012!! I gotta say, I LOVE this idea. Of course, I’m a carpenter whose mother was a librarian and whose father was a poet, but still…this idea has it all. What a great way to get people interested in reading, sharing with your community and getting kids and adults outside and building something together.

At their website, Little Free Libraries sells finished kiosks and kits, but it is also packed full of free stuff to help you build your own. Plans, videos, how-tos and templates, information about zoning, how to discourage vandalism…they really have thought of everything. If you decide to build your own, you can register it, and it will get an official number and be included in their interactive online map.

Recently, when hanging out at the open house at the Cedar Rapids Makerspace, I ran into a friend, CJ Flynn, who was just finishing up the installation of a series of Little Free Libraries. I asked him a few questions about his Little Free Library project:

How did you decide to build the little free libraries?

While serving on the Friends of the Hiawatha Public Library group and seeing firsthand how the Hiawatha community values literacy and the high usage of our library, I knew it would be a good fit.

How many did you build, and how did you decide on the locations?

The MakerSpace and I decided to build 4 little free libraries since this was a pilot program and we needed to keep the costs down. I always intended to work with the City of Hiawatha so we could put them in highly accessible public spaces where our residents would be more likely to see them and use them while enjoying the outdoors, so the parks were my preferred sites. Two will be placed in Guthridge Park, one in Tucker Park, and one near the Cedar Valley Nature Trail. The last one has not been finalized yet.

Did you build them yourself, or as part of a team?

“It took a village” to make this project work! I personally became a Maker at the MakerSpace and joined several of my fellow Makers, with Maker Jim Lee as the Project Leader, to build them one night per week for about a month. Then they were turned over to three local artists at the Artist’s Sanctuary in Czech Village in Cedar Rapids. The fourth one was painted by several fifth-graders at Hiawatha Elementary School under the direction of Art Teacher Penni Hancock.

What kind of cooperation did you need from property owners and city regulators to put them up?

I attended a meeting of the Hiawatha Parks and Recreation Commission to present a proposal to them about the little free libraries project. The Hiawatha City Council and the mayor also attended. I was happy to have them all together so they could hear the details and vote on the project so we could move forward, or not. There was some discussion about exactly where to put them in the parks and the issue of possible vandalism, but they approved the project enthusiastically.

What has the response been? Have you gotten any feedback?

The response to this project has been really positive  Many people did not know what a little free library was, but now they do. The little free libraries will be installed this spring (2015) and we hope to have more feedback on them once they are installed and available.

Do you plan to do more?

My goal for this project was to spread the idea so that other organizations and individuals would create their own little free libraries in the area. I would love to have one in my front yard someday and I hope others will do that privately too.  There are endless possibilities for businesses to become involved and have one.  The little free library website is so helpful by giving all kinds of advice about building plans, where to put them and how to make the project go smoothly.  You just need someone who will build it, fill it with books and take care of it.

BIG UPS to CJ and the crew at the Cedar Rapids Makerspace. I’m tellin’ ya, Makerspaces are where it’s at!!