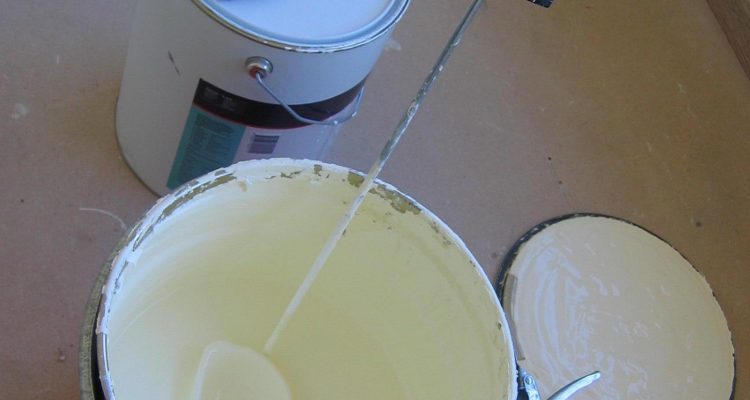 Painting a room a new color is a great (and cheap) way to redesign a room in a hurry. Throw in a bit of décor and next thing you know you’re on HGTV with a hit TV show. Well, maybe you won’t get that lucky, but hey, the room looks good and it didn’t cost you a fortune. Or did it cost you something even more valuable than your hard-earned cash – your health?! Some paints release nasty gasses called VOC’s for years, long after the paint has dried. Use this guide to indoor paints and avoid off-gassing troubles that might make you forget third grade math or make your kids grow an extra limb.

Painting can be a nasty business, but it’s a job well worth the effort. With just a little can of color, you can transform a room in less than a day. It’s only messy if you make it, but one thing about paint that’s tough to avoid is the smell. It stinks when it’s opened, it smells when it’s applied and it can even smell years later if it’s high in VOC’s.

What the Heck is a VOC?

So what does VOC mean anyways? It stands for volatile organic compounds. VOC’s are potentially very nasty and are found in all sorts of paint. VOC’s often come from petroleum based products and can have harmful vapors that are easily inhaled. The EPA says some VOC’s have short and long-term adverse health effects. VOC’s in general range from no known adverse effects, to VOC’s like benzene which is a known carcinogen in humans.

You know those eye irritations, headaches, dizziness and fatigue you felt when you painted junior’s bedroom last week? That may have been VOC’s messing up your system. And, if you’re exposed to these vapors long term (just like when off-gassing occurs, but more about that later), you can develop problems with your nervous system, liver and kidneys among other things.

To make matters worse, pregnant women (like there’s such a thing as pregnant men), youngsters, elderly, asthmatics and professional painters are all at a higher risk for developing the above ailments.

As long as you open the windows and doors, turn off the AC, run the fans and wear a respirator, you’ll be safe from brain-damaging paint fumes, right? Only if you never walk into that room again. Even though most of the toxic VOC’s get released as vapor when the paint is applied, it can still release nasty VOC’s long after the paint dries. In some cases, it can linger for decades. That means junior is getting a not-so-healthy dose of VOC air every time he goes into his room. Should we call Child Protective Services on you? It’s not likely the charges will stick, but it’s a good idea to paint junior’s room using the following tips.

When you’re choosing an indoor paint, you need to look for low or no VOC paints. Many paint manufacturers have solvent-free paints in their product line. Look for a brand that has a VOC content of less than 50 VOC grams per liter for a good fume-free paint.

Be wary of paint brands that claim they have no odor. These might just use an odor free solvent, but they can still be chock full of VOC’s. Be sure to check the label carefully!

Paint tints contain VOC’s as well. While a lighter shade of tint isn’t really enough to raise the level of the paints VOC very much, a darker color will raise VOC levels in your paint. Generally, staying lighter means less VOC’s.

Rent or buy a large exhaust fan and place it in the window. Keep it ventilated for at least 48 hours prior to use. Kids, asthmatics, elderly and those who are pregnant should avoid using the room for 3-4 days after painting is complete.

is a brand well associated with sustainability and minimal to no VOC’s, and you can find some of their product line online at Amazon. We’ve also used and had favorable experiences with AFM Safecoat paints in the past.