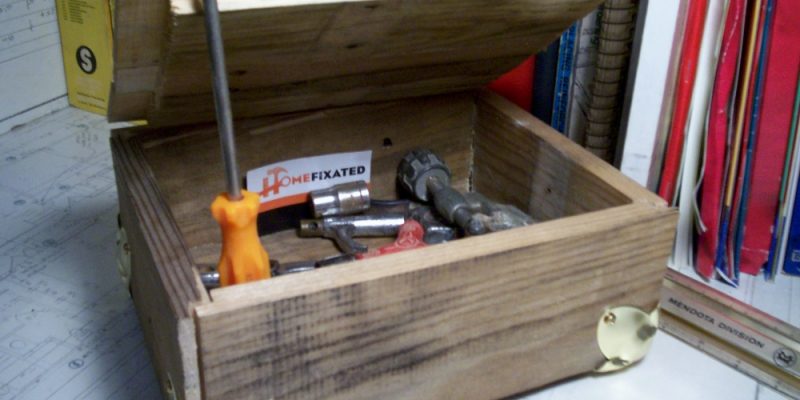 Years ago when I just started to take up the framing trade, we used to burn pallets by the dozen to stay warm, and to help clean up the jobsite wood waste. Today when I see $100 pallet art selling like hot cakes, it makes me laugh. I’ve mistakenly burnt up millions of dollars of precious art! What am I, a fascist? Today, I attempt to redeem myself as I show you how I made a simple lidded-box using just three materials; wood glue, pallet wood and a few pieces of hardware.

It’s weird to me how two words that are almost spelled like each other (ballet and pallet) are pronounced so differently. And a pallet itself is just like that as well, it might look the same as the next pallet but you can bet it’s going to be built as unique as you or I. Never in my life have I seen a pallet that has one board the same size. They are always thicker, longer, wider, rougher, smoother, stained, discolored, dented or different in some way when compared to the next board. It’s second rate material at best and it’s good for three things: a pallet, a fire and fine art. But I found a fourth use for pallets, a nifty little tool box that works great for holding your loose bits, sockets or whatever. Best of all, you only need some wood glue and a hinge to build it.

I stacked my dado blades to cut the average piece of pallet in half—this way I could make simple rabbet and lap joints. I set up my table saw with the two sides of the dado facing the right direction and a 1/16-in. wedge in the middle. I made a few test cuts and adjustments until I got the depth and fence set perfectly.

Next, I set up my trusty miter saw on its stand and cut a few pallet pieces ten inches long for the base of the box. You can cut your box any length or width you want, but you’ll have to add cross supports if you make it too wide or long. After all, my design calls for just a few pieces of pallet wood glued together and is not some strong box for a pile full of your heavy duty crap.

After I made a lap joint and test fit the pieces, I glued them together using wood glue and a clamp. Once they dried, I cut the rabbet joints around the entire outside edge of the now formed base.

The other two sides of the box I cut in the same fashion, but they ended up being about 7-3/4 in. wide. I also cut a rabbet joint into the three sides (bottom and two sides) so that they also fit snugly into place between the other two sides. After a test fit and slight trim, they were glued and clamped into place.

Cutting the top was a little tougher because I had to mash up two wider pallet boards with a smaller board sandwiched in the middle. I wanted to make it as simple as possible so I just cut a lap joint into all three pieces. Since it was much wider than I needed it to be, I just centered it on top of the box and traced the sides with a pencil. I cheated by using the dado blade to rip down the pieces instead of changing out the blade.

I also wanted the top of the box to fit tightly into the opening so I decided to trim around the edges of the lid so that it slightly recessed into the box when closed. I cheated with the dado again this time too.

Since I stacked the dado blade so that it was only wide enough to cut halfway through the thickness of the pallet boards, it wouldn’t cut deep enough to make the lid fit inside the box. No problem! I just set the depth of the blade twice as high as before and turned the material on its side. This allowed me to trim the piece wide enough to accommodate the thickness of the pallet boards without having to mess around with the blade. But be careful as this little trick puts your hands close to the blade and can make the piece unstable. Use a feather board, a push block, and lots of caution or you may risk losing a finger or two!

I was lucky enough to get some neat little brass trunk corners from our esteemed sponsor, Rockler Woodworking and Hardware. These might have been a little too fancy for topping off the pallet tool box, but I figured it would help protect the corners of my handy little tool box. I threw on an old aluminum screen hinge and voila! My pallet box was complete.

I left it on the coffee table that night and went to bed satisfied. When I awoke the next morning, my pallet box was nowhere to be found. After almost giving it up as a loss, I thought I might as well check my daughter’s room. There it was on the corner of her desk, pencils, glitter glue and scissors were stuffed neatly inside. I guess my pallet box wasn’t built for tools after all!

Have any fun pallet projects of your own? Let us know in the comments below.