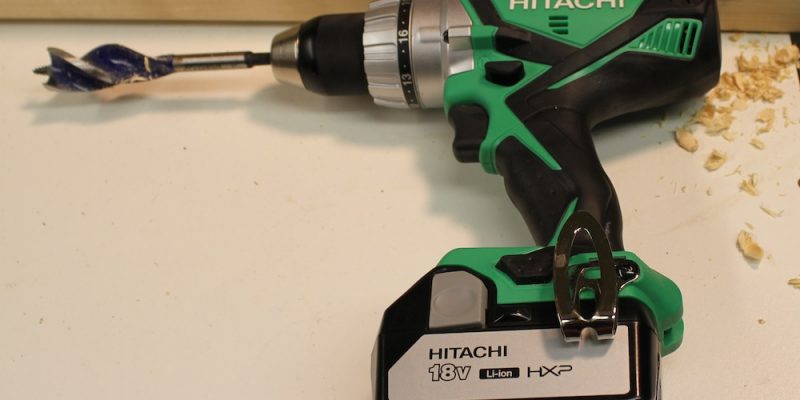 If you’re someone who loves to roam around chanting “Drill, baby, drill!,” Hitachi’s engineers likely had you in mind when they came up with the new Hitachi DS18DSDL Cordless Drill. Everyone else you encounter, however, is just more likely to give you a bit more personal space, especially if you actually have a drill in your hand while you’re chanting.

Heedless of other people’s qualms, Hitachi recently added some extra torque to its lineup of Lithium Ion slide-pack cordless tools. After making us pledge to keep the chanting to a minimum, Hitachi sent us one of their new DS18DSDL drills to evaluate. Some key features:

The Hitachi DS18DSDL comes with a detachable, reversible handle. On this drill, it actually comes in handy, as 814 in/lbs. of torque can be enough to snap your wrist around (ask me how I know). The metal belt clip is also reversible, for those of you who obstinately insist on remaining left-handed. It also comes with a double-headed Phillips driver bit, two 3.0Ah Lithium Ion batteries, and a quick charger. Everything fits nicely into the standard Hitachi molded plastic case, with lots of room left over for driver bits, screws, work gloves, or a change of underwear.

I’m familiar with the Lithium Ion battery packs; they’re the same type used by my Hitachi DV18DBL brushless hammer drill.  After using that drill for about a year, I’m very impressed by how well the batteries perform. They hold a charge well between jobs, allow me to get a good bit of work done before needing a recharge, and charge up quickly. I also like the strength indicator; it’s nice to get a sense of how much charge remains BEFORE clambering up onto the roof, or wiggling into the scary crawl space.

The two-speed gearing operates at a low speed of 0-350 RPM (ideal for driving fasteners or drilling big holes) and in high speed at 0-1,600 RPM (ideal for drilling smaller holes). The ratcheting metal keyless chuck is a beast; it cranks down on the drill or driver bit, holds it in tight, and requires only one hand to do it.

The Hitachi DS18DSDL vs. Its Little Brother

The Hitachi DS18DSDL claims 814 in/lbs. of torque, versus the DV18DBL brushless drill’s 654. Since my torque-o-meter is on the fritz, I decided to try a couple of side-by-side comparisons to see if the DS18DSDL’s torque was noticeably superior.

My first test was to drive some 3” deck screws into a couple of 2X4s. Unfortunately, I didn’t have any Outlaw Screws to do my test with, so I used Deck Mate screws with the special star bit to prevent cam-out and stripping. I used the older drill first, and drove about a dozen screws through the 2X4s. It buried them all quickly, without fading or bogging down; at one point, I think I heard it yawning. I switched over to the Hitachi DS18DSDL and repeated the process. There was no discernible difference between the two; they both made short work of the 3” screws.

To make it a bit more challenging, I got a 5/16” X 4” lag screw, and chucked-up (better than up-chucked) an adapter and a ½” drive socket. I then switched to the low gear range, and drove it through the 2X4s without pre-drilling. Both drills handled the job with no problem, although the DS18DSDL finished about a second or so faster (8 seconds vs. about 9), and the DV18DBL seemed to bog down a fraction more. I did this four times with each drill, and the results were the same each time.

The other chore where torque matters is drilling holes—biggish holes. To test out the hole-making capabilities of the Hitachi DS18DSDL, I first chucked up an Irwin Speedbor Max 1” bit. I then introduced it to the doubled-up 2X4s. This was also done in low range, which is where the torque lives. Both drills powered through with no problem; again, the Hitachi DS18DSDL edged out its less-torquey brother by about two seconds—10 vs.12. A huge difference? Nope; but if you’re doing it all day, those seconds add up, and the slower drill—and you—end up wearing down faster.

Ready To Get Torqued?

I’m a big believer in using the right tool for the job. In this case, the Hitachi DS18DSDL can be the right tool for a LOT of jobs. If you’re in need of a new drill, the versatility of the DS18DSDL makes it an excellent contender for your short list. The clutch adjustment allows it to be stopped down to easily handle all your normal daily tasks—like driving drywall or deck screws, attaching small fasteners, and drilling smaller holes. When you have a bigger job, it can be cranked up to drive moderately sized lag screws, or to drill some serious holes.

It’s not a cheap tool, but as with most things, you get what you pay for. These are tools designed to stand up to daily use by people in the trades; the kind of tool that will give you excellent service for many years. And it should give you a warm, fuzzy feeling knowing the Hitachi DS18DSDL is covered by Hitachi’s Lifetime Lithium Ion Tool Warranty and two-year Lithium Ion battery warranty. Get YOUR daily dose of torque via the Hitachi DS18DSDL 18-volt Lithium-Ion Driver Drill 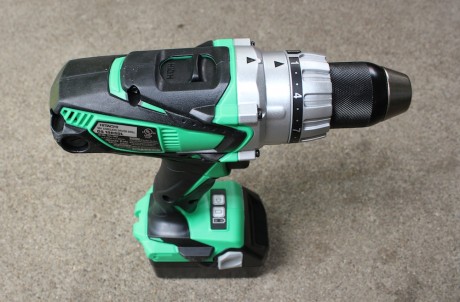