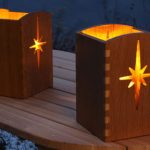 So, just in time for you to stop thinking about Christmas, here is a pretty cool Luminaria project from Woodworker’s Journal. If you have any artsy-fartsy friends like I do, you’ve probably seen these. Or, if you have really cheap artsy-fartsy friends like I do, then you’ve seen candles inside of paper bags filled with sand. Either way, they are visually appearing and give a nice ambiance to a driveway or walkway. They can create an artistic landing strip to guide party-goers in, and, eventually help them stumble their way out without trampling your landscaping.

According to the plans they say that you can make these in a weekend. However, if you work anything like me you should have two or three done by at least late August. Either way, by the time next Christmas comes around you could have a nice, permanent set of luminarias… luminarium… luminarii… illuminati… Anywhoo, the plans, (which can be downloaded from Woodworker’s Journal), call for ½” stock of a good exterior wood like cedar, cypress, white oak, etc. In their plans they use a Dremel Trio and Dremel Multi-max tool, however, you could use a jig saw with a small scrolling blade, a scroll saw, or just let it rot away to make a more ‘natural’ pattern.

After you build your Luminaria, make sure to contain the candle in a glass or metal jar and place some sand in the bottom to keep the candle upright and distribute the heat better. Think about that for a minute and what it would be like to set a candle inside a wood box with varnish or stain… If you really want to play it safe, go flameless and buy a Set of 12 Battery Operated Flickering ‘Flame’ Amber LED Tealight Candles

for around $10. They also build the Luminaria using box joints and a dado blade or simple butt joints. However, for you ambitious types, mitered joints or even dovetails could be used here; the choice is yours.

The plans come with a downloadable and printable paper pattern to cut the star. But, I have a much better idea. I’m going to build a lighted path to pay homage to my heroes. Close your eyes and imagine this walkway: John Wayne, Jackie Chan, Jet Li, Sylvester Stallone, Arnie and of course the greatest of them all, Chuck Norris!!! If you decided to be a little more festive and not ridiculous, then try the star pattern or create your own Christmas tree or Santa pattern. Happy sawing and just think about Chuck Norris with a Santa hat on?!?