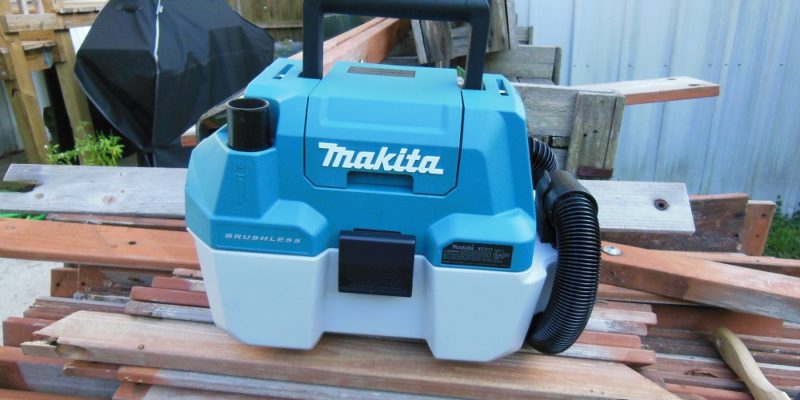 No matter how lightly you tread, your shoes are high powered dirt magnets that inevitably bring the outdoors in. Luckily, others handle the indoor vacuuming at my home – it’s one of the perks of marriage. But my luck ends at the driveway, an unpaved witch’s brew of dirt, leaves and stump grindings. Car floorboards quickly become debris pits, then I’m sent to the gas station pay-vac (another marital “perk”) to evict the ick. We recently received a Makita 18V LXT cordless portable vacuum cleaner to check out. The XCV11 is a brushless battery powered wet/dry vac, dust extractor and blower. And it turned my chore into my pleasure!

A Little Portable Vacuum That Does It All – No Cords Attached

Like most portable vacs, the Makita XCV11 can be used as a wet or dry vac, a dust collector for small power tools and as a blower. It can go a long way towards intercepting fine particles that would otherwise fill the air and settle on everything in the area, including the insides of your lungs (and HVAC system). Especially when working indoors.

It’s little and has no extension wand, but does fairly well at blowing dry grass, sand, leaves and sawdust off of a small patio, walkway or workbench.

Makita XCV11 Cordless Portable Vacuum Cleaner – It Sucked Me In

The XCV11 is plenty powerful for its size. But there’s more to draw you in than just its 57CFM of air movement and 27” of water lift suction. Here are some highlights:

* Onboard hose and nozzle storage.

* Up to 1 hour continuous run time (when using a 5Ah battery).

Most portable vacuums come with stiff, cumbersome hoses that can be hard to manage and even harder to stow away. That’s not the case here.

The Makita XCV11 comes with a soft, wire reinforced hose that can U-turn tighter than a pretzel in a bench vise and stretch farther than the truth from a politician’s mouth. Well, the hose does stretch from about 2 feet to nearly 6. So at least one of those is true. And it does make some pretty tight turns.

Keeping Your Charge In Check With An Onboard Battery Level Meter

The orientation of the 18V LXT battery – and the fact that there’s a lid – prevents you from even seeing its built-in charge indicator. But don’t let that drain you; Makita already solved the problem! To the left of the XCV11’s power/speed selector switch is another battery meter, similar to the one on the battery itself.

I don’t mind vacuuming my wife’s car. But I have to be honest: making a special trip to the “convenience” store can be, well, less than convenient. Sure, I could run a power cord and use a portable vacuum that I already own, but it’s a genuine pain in the vac to do so. Our parking is outside and there are no power outlets on the front (or nearest side) of the house.

To further “enhance” the pay-per-play experience, a third of the time (literally, it’s so annoying) popping my $1.50 into a coin-op vac results in one of the following: It’s clogged and has no suction; it doesn’t come on at all; the coin slot is jammed so I lose the $1.25 that did manage to go in or; it times out halfway through the job and my frantic, failed attempt to out-race the hidden timer costs me six more quarters.

Makita’s XCV11 is capable of way more than tidying your spouse’s car, but that’s probably where this one will see the most action. It’s just so convenient; and that makes my life a lot easier. We’re both happy!

As for my own vehicle, I only ever bother to vacuum it at times like this, when I’m reviewing a portable vac. And so I did. But honestly, I don’t care nearly as much about mine as my wife does about hers. It must be a guy thing.

Hella HEPA – Filtering Out The Nonsense

The Makita XCV11 actually comes with three layers of filtering. There’s a pleated HEPA filter that stops particles as fine as 0.3 microns. Around that is a damper. Finally, the whole thing is engulfed in a cloth prefilter.

Hands down, my favorite thing about this vacuum is the fact that it’s cordless. Then there’s the 2-speed BL brushless motor that lets you extend battery life when you don’t need full power. And really, low speed is sufficient a lot of the time. Though you’ll probably want to use the higher speed for tool dust collection, sucking up water, and for dirt embedded deeply into carpeting.

On the down side, it’s priced at the higher end of the spectrum for a vac like this and that might not win over buyers who aren’t already on team teal. I also feel that for the price it should include the shoulder strap, rather than it being an optional accessory. Maybe even an extra HEPA filter. That said, it does do a great job. It’s also more compact than most vacs in this class, making it really easy to stow or carry around – all of which can be desirable traits.