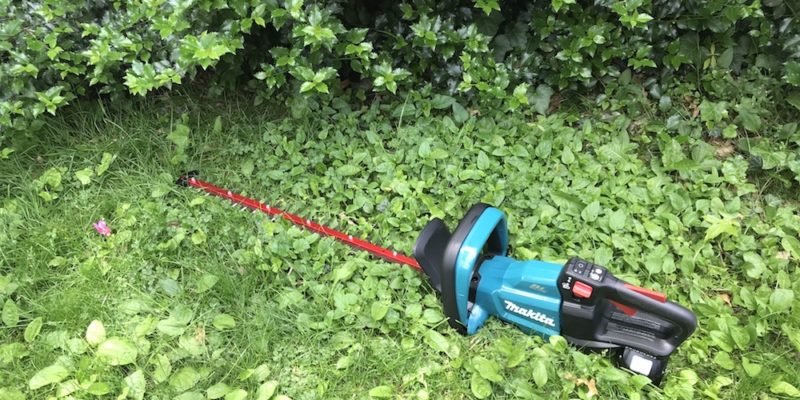 Getting ready for another season of doing battle with nature’s leafy creations? Tired of breathing two-stroke fumes and wearing sweaty hearing protection, or dragging a tangled extension cord? The engineers at Makita’s Outdoor Power Equipment (OPE) division have been hard at work to make YOUR work more enjoyable. Or at least less annoying. The latest addition to their already-impressive lineup of OPE has more power and less weight and noise than its most powerful cordless predecessor. Its full official moniker is the Makita XHU07 18V LXT® Lithium Ion Brushless Cordless 24″ Hedge Trimmer. We gave it a quick trim job, though, and it shall henceforth be referred to as the Makita XHU07.

The Makita XHU07 comes equipped with a 600 mm (roughly 24” for my fellow metrically-challenged friends) set of shear blades. Too short? No worries – the stock blade can be swapped out for a 750 mm (29-1/2”) set of blades. Instructions for performing this surgery are included in the manual. The trimmer is also available with a set of those 30” shear blades as the Makita XHU08. Aside from the longer blades, the Makita XHU08 is identical to the Makita XHU07.

The XHU04 added quite a bit of power, but did so partly by adding a second battery. This added a fair bit of weight; the XHU04 weighs in at 12.2 lbs. with batteries vs. the 7.4 lbs. of the XHU02. Its 25-1/2” blade was a nice improvement, though, and its adjustable six-speed dial maxed out at 1,800 SPM. The XHU04 also added a five-position head, which Makita included on the Makita XHU07.

The biggest upgrade to the Makita XHU07 was the inclusion of a brushless motor. With the more powerful and efficient brushless motor, the tool can run at speeds up to 4,400 SPM, a huge increase over either of the two older models. Weighing in at around nine lbs. with battery, it would be a lot easier to go to war with those bushes than the twin-batteried XHU04. Have a look at the full list of features and specs, then we’ll take a closer look at the tool’s features and performance:

Safety First With The Makita XHU07

As you might expect for a tool whose extremely sharp blades can slide past one another 4,400 times a minute, there are a fair number of CAUTION! and WARNING! Messages in the owner’s manual. There are also several important safety features built into the Makita XHU07.

Before those extremely sharp blades will start stroking, a couple of safeties must be overcome. Sliding off the protective sheath is the first step. It fits snugly, but goes off and on fairly easily.

Next, it’s time to power up the teal beast. It’s very fast; just press and hold the power button for about a second. The same technique works to power down the Makita XHU07 when your bushes have been transformed into fine topiary. The tool will also power itself down after about a minute of sitting idly by, waiting for you to get back to work.

To ensure the tool is operated with both hands, the first safety is on the forward support handle. Picking up the Makita XHU07 by the forward handle positions your hand properly to engage the switch lever. Next, the operator’s hand must have a full grip on the trigger handle, which will depress the lock-off lever, allowing the trigger to be pulled.

There’s a hand shield in front of the forward handle, to help fend off wayward branches. A tip guard helps protect the end of the blades from hard surfaces – and might help protect soft surfaces, like your foot, from the blades.

A pair of safety glasses is included with the Makita XHU07; wearing them is an excellent idea. A pair of sturdy leather gloves is another worthwhile investment (see “extremely sharp,” above…).

To Serve And Protect – Tech In The Makita XHU07

Along with its efficient, high-tech LXT brushless motor, Makita packed the Makita XHU07 with technology to help it function better – and last longer. Other components of the LXT system include the Lithium-Ion batteries, which Makita says will keep cranking out the power 50% longer than a comparably-sized NiCad battery. Using their Rapid Optimum charger, those batteries charge very quickly; a 2.0 Ah battery takes about 25 minutes, and a 5.0 Ah battery only takes about 45 minutes to fully charge.

The Makita XHU07 also takes advantage of Makita’s Star Protection technology. The Star system uses internal tech to help prevent overload, both to the tool and the battery. To further protect the battery, it shuts the tool down when it’s almost drained, to prevent over-discharge, and monitors its temperature, to prevent overheating.

Since most outdoor power equipment is used, well, outdoors, the Teal-clad engineers wanted to make sure the internal tech and components were protected from nature’s unpleasantries. The Makita XHU07 includes Extreme Protective Technology (XPT), consisting of a series of protective seals, to protect the tool’s innards from intrusion by water, dust and debris.

At a bit over eight pounds with a battery installed, the Makita XHU07 is pretty easy to schlep and use. It’s very well balanced, and the handles have plenty of room, and are nicely rounded and fairly comfortable. The rear handle has a bit of rubber overmold, which helps a bit with comfort and vibration reduction. It would be great to have some on the forward handle as well, to help with comfort, vibration and slip-resistance.

Tired of cutting in the upright and locked position? Finding a comfortable operating position is fast and simple. Press down on the tab on either side of the Makita XHU07 hedge trimmer, and the head can be rotated to a 45° or 90° detent, to the left or right, giving a total of five positions. The controls are well laid out and fully ambidextrous, making the trimmer very lefty-friendly, not always the case in this mean old right-handed world.

Rotating through the three speed ranges on the Makita XHU07 is also fast and easy. Each brief press of the power button cycles the tool to the next range. The three speed ranges (0 – 2,000 SPM, 0 – 3,600 SPM and 0 – 4,400 SPM), coupled with the variable-speed trigger, provide excellent control when cutting with the tool.

The inclusion of a Reverse function on the Makita XHU07 may seem strange. No, it won’t reattach that beautiful branch you didn’t quite mean to cut off. If the blades get caught in a tangle, or stuck on a big branch, the Reverse function will be your new best friend, though. Take your finger off the trigger, press the R button, and hit the trigger. The blades will open up, and then stop, allowing you to get disentangled. When you pull the trigger again, it automatically starts up in normal cutting mode.

Pulling The Trigger On The Makita XHU07

We have several bushes in random areas around our house. Thanks to copious quantities of rainfall this spring, all of them have been sprouting new appendages like crazy. I slid in the Makita 5.0 Ah Lithium-Ion battery that Makita provided with the tool they provided to us, and commenced slicing and dicing.

The first thing I noticed was how quiet the tool is. I’ve used several cordless hedge trimmers, and the Makita XHU07 has to be among the quietest. The tool has great balance, and was very intuitive to use. It tore quickly and easily through branches ranging from about 3/16” to around 5/8” thick.

Vibration control on the Makita XHU07 is excellent. Even after using the tool off and on for about 90 minutes, I had no tingling or other vibration-induced numbness in my hands and arms. That was a very nice change from the gas-powered trimmer I used recently. I didn’t miss the noise and gas fumes, either.

Maneuvering around the bushes was made easier by the rotating head. It was handy to be able to pivot the cutting blades, while keeping the handle and trigger in the same upright position. Adjustments were super fast, and the head locked solidly into place. When I took my finger off the trigger, the blades stopped instantly, a very nice safety feature.

Ready For The Feel Of Teal Steel?

If you’re a pro, looking for a hedge trimmer that can be used in low-noise applications, the Makita XHU07 or XHU08 should fill the bill. It’s VERY quiet, comfortable to use, has decent cut capacity (blade gap is about ¾”), and gets very good run time on a Makita 5.0 Ah battery. It can be used with any slide-type Makita 18V battery, but obviously bigger battery = longer run time.

This would also be a great tool for any homeowner with lots of unruly bushes to tame. It’s very fast to get into operation – just slide on a battery, turn it on, and pull the trigger. No oil, gas, or noise. Maybe your neighbors will even chip in! The tool is available with either the 24” or 30” blade, and either as a bare tool or in a kit, which includes two 18V LXT® 5.0 Ah batteries and dual port rapid charger. To help you hedge your bets, Makita backs it all with a three-year warranty. 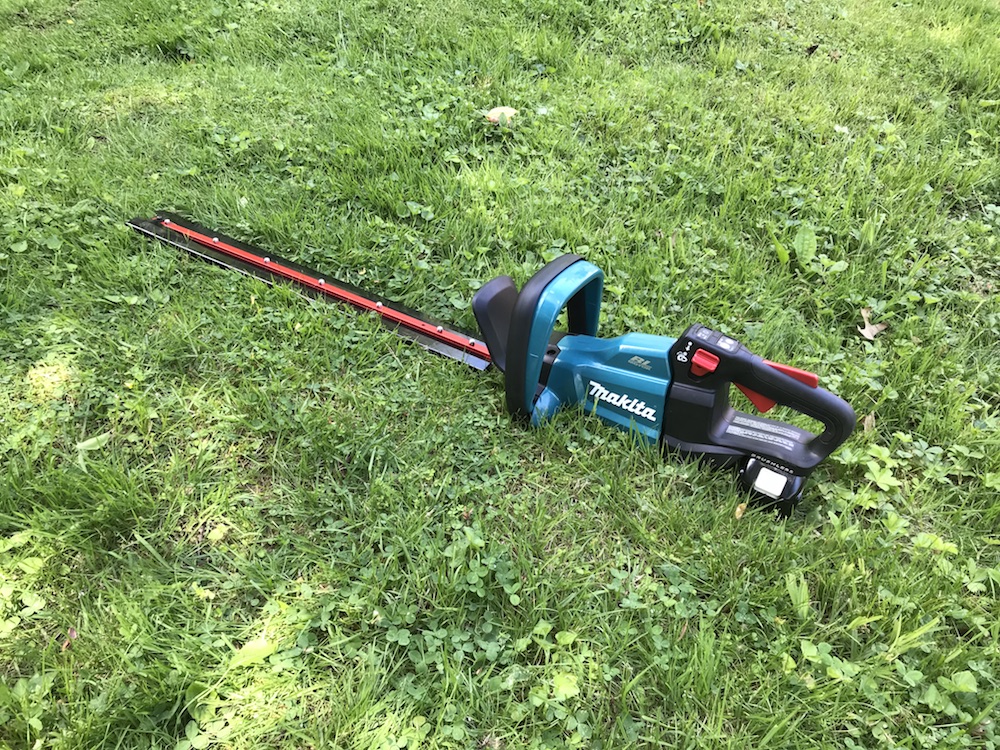