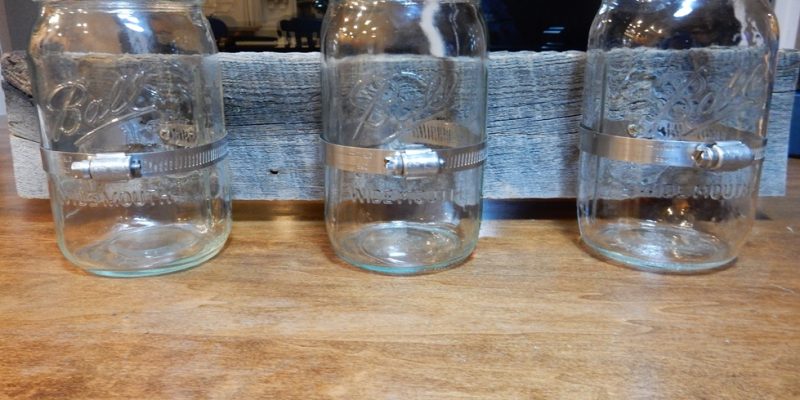 After a winter of back to back blizzards, all I want to be is warm and horizontal. While achieving this lazy goal, I’ve found myself thinking about vertical gardening. The thought alone has been enough to get me vertical and moving again. As I often do in the midst of a cabin fever, I headed to my garage this winter just to see what wonderful old wood might be available. The right piece of wood is like an unfinished sculpture waiting to be developed. Sure enough, I found a scrap piece of old fencing left behind from a previous project that inspired me to create rather than wallow.

Three in a Row

Back inside, I found two empty wide mouth Mason jars. I opened up a third jar filled with canned Palisade peaches. My kiddos enjoyed the late summer sunshine in those peaches while I cleaned up the jar for the project. With the three jars and the wood, all I needed were some metal clamps, a few screws, and a couple of hangers.
My husband is a tool and hardware hoarder, so we had plenty of screws and hangers. But no clamps. The thought of the cold I’d have to face to go out for three metal clamps caused me to return to my horizontal state. But alas, my knight in shining armor arrived with not gold, but three round, metal clamps in just the right dimension. The Mason jar vertical garden project was officially on!

Since my piece of wood was already cut in a length that looked good to me, I measured the center point of the piece. This point was where I attached the first metal clamp. Since the clamps are made of thin metal, I was able to place the screw right through the metal and into the wood. The screws were about an inch long and chunky so they’ll hold the weight of the filled jar.

After placing the first clamp dead center, I laid out the three jars and measured them so they were equidistant from each other and from the ends of the board. I screwed the clamps onto the board in their appropriate places.

I flipped the board over and attached two hangers onto the board with screws. Again, I wanted the screws to support the weight of the entire board with three filled quart sized mason jars. That can be rather heavy, so there was no room for flimsy.

Vertical Garden, or Not

Finally, I fit the jars into their clamps, and I really like how this project turned out. I’ll admit that I won’t be using this as a vertical garden just yet. And as much as I love gardening, I’m a houseplant murderer. Not going to lie about that.

If I were a better indoor gardener, I would definitely use this new vertical garden of mine for herbs in the kitchen. And a few other houseplants, like dieffenbachia will grow happily in Mason jars. I think this vertical garden would look super cute with succulents in the jars too, as long as you were careful to keep the inside of the jars condensation free. Succulents like to be dry. On the other hand, if you put lids on the jars to trap moisture inside, this vertical garden could be used to plant cool little terrariums in.

I might store dry ingredients, like chocolate chips, oatmeal, and sugar in the jars with lids on. This project could be useful in the bathroom for storing Q-tips, cotton balls, and toothbrushes. For now, though, I’m going to fill the jars of my vertical garden partly full of little pebbles and nestle a tea light or votive candle down into each jar. I’m going to light those pretty, reflective candles in the jars, think warm thoughts, and get horizontal!