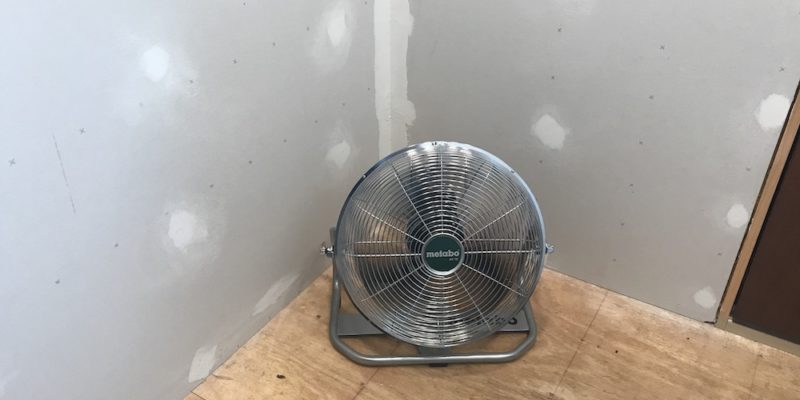 I’m not sure if it’s global warming – oops, I mean global climate change – or I’m just getting old and feeble. Whatever the culprit, the past few months have seemed extra warm and miserable. Of course, having to wear a mask much of the time hasn’t helped. Lately, though, the heat seems to wear me down faster than usual, and cool breezes have been few and far between. Luckily, the FedEx guy dropped off a big box a couple of months ago from our friends at Metabo that lets me make my OWN breeze, with the Metabo AV18 18V Fan. Settle back, and enjoy the virtual breeze as we take it for a spin…

When I heard the Metabo AV18 18V Fan was on its way, my expectations were set to LOW. I figured it would just be another wobbly, noisy unit with plastic blades that would crack in a month. My expectations rose to MEDIUM when I lifted it out of the box, and felt how hefty it was.

The reason for the heftiness? Steel is heavy. And steel dominates the construction of the Metabo AV18 18V Fan. Just like in olden times, when things were built to last beyond a 90-day warranty. Durability – what a concept! Let’s breeze through the list of features and specs from Metabo, then we’ll take a closer look:

When the Metabo AV18 18V fan slides out of the box, it’s almost ready to start making wind. Just slide in a Metabo 18V battery, and you’re good to go. The fan is compatible with all Metabo 18V slide batteries; obviously, the bigger the battery, the longer you’ll be able to keep that cool breeze blowing. We’ll take a look at one of their newest batteries momentarily.

Controlling the speed on the Metabo AV18 18V Fan is intuitive and easy. There’s a button on the motor housing; hold it in for a second or so, and the fan fires up on LOW speed in soft-start fashion.

Pushing it again bumps the speed up to MEDIUM, and another brief push kicks it into TURBO. Brief pushes of the button will cycle the fan through the three speeds; holding the button in for a second or so will shut ‘er down.

Focusing that breeze is also simple. The Metabo AV18 18V Fan can swivel up or down on a rubber-dampened axis, and a clamp locks it solidly in place.

To help protect whatever surface the fan is sitting on, the Metabo AV18 18V fan sits on sturdy, non-skid rubber feet. This provides the added benefit of preventing the fan from going walkabout, and helps dampen vibration.

Don’t want your fan lazing about on the floor all day? You’re in luck. Metabo also included an integrated mounting plate, with several mounting options. There are keyhole mounting slots on opposite ends for wall mounting, and a standard threaded hole for tripod mounting. They also included pre-drilled holes in the base, in the event you want to permanently screw or bolt it to a wall, shelf, or wherever you’re in need of an ongoing gust of air.

Over the past few sweltering weeks, the Metabo AV18 18V Fan hasn’t had much down time. I used it in my shop as I attempted, with moderate success, to get organized. Being able to just grab the fan and schlep it to my next target area, without having to search for an outlet or trip over an extension cord, made the task almost fun! Just kidding; it WAS a nice time saver, though.

The fan was also a welcome companion as I worked outside, repairing and painting some rotted trim. Having some air movement on a still, 90-degree day made it much easier to hang with the job until it was finished.

One day, when I went to grab it for some air movement while working in the garage, the fan had mysteriously disappeared. The mystery was solved when I tracked down my wife. She had liberated it to provide ventilation – and a bit of cooling air – as she stained and polyurethaned some double-hung windows we were preparing to install.

It wasn’t all work for the Metabo AV18 18V Fan, though. It also got the honor of sending a cooling breeze wafting over us as we enjoyed a refreshing beverage on the deck at the end of several long days.

Whether working indoors or outside, fan noise was never an issue. When it’s humming away on LOW, you can barely hear it, and even on HIGH the noise isn’t at all bothersome. And on any speed, the 14″ metal blade does an excellent job of accomplishing its mission: moving air.

Obviously, spinning the metal blade on a battery-powered fan takes some juice, and you don’t want to lose the breeze halfway through the workday. Metabo claims up to 7 hours of tun time on LOW, using a 5.2 Ah battery. They also have larger batteries, including an 8.0 Ah unit, and they sent us one of their new 5.5 Ah LiHD batteries (part # 625368000) to try. Check out the specs, and then we’ll give you a run-time rundown: 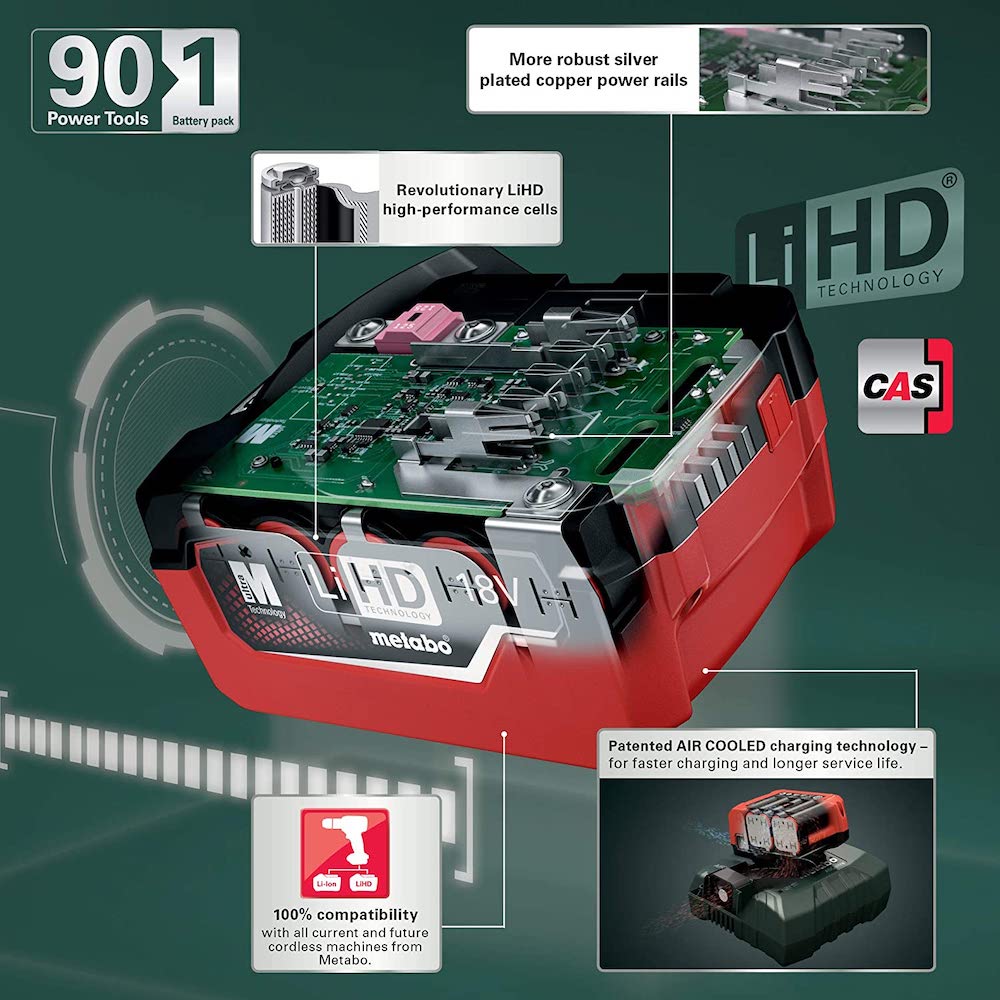 Again, Metabo says the fan will run up to 7 hours on LOW with a 5.2 Ah battery. To see how much additional run time the Metabo 5.5 Ah battery would provide, I charged it up, and fired up the fan on LOW at 8:35 a.m. It finally knocked off at 8:58 p.m., after an impressive 12 hours and 23 minutes. That’s enough to get you through a full day’s work, and a VERY extended happy hour!

After completely running down the Metabo 5.5 Ah LiHD battery, we recharged it using the Metabo ASC55 charger they provided. The ASC55, which can also be used to charge Metabo 12V and 36V slide-on batteries, provided a total charge of the 5.5 Ah battery in an hour and 46 minutes, and the battery was cool to the touch immediately after charging. Here are the features and specs from Metabo:

After using the Metabo AV18 18V Fan for the past couple of months, I’m a fan. I love being able to easily put the fan anywhere I want, without having to worry about finding an outlet or an extension cord. It makes it so easy to get ventilation, or a cooling breeze, in the shop, greenhouse, or even on the deck.

Build quality on the fan is excellent. It looks and feels like a solidly-made piece of equipment, and I’m guessing it will hold up well on the job site or for DIY use around the home and shop. Metabo backs the Metabo AV18 18V Fan with a three-year warranty. Lay down your plastic, pick up some steel, and get ready to BYOB (Bring your own breeze)!