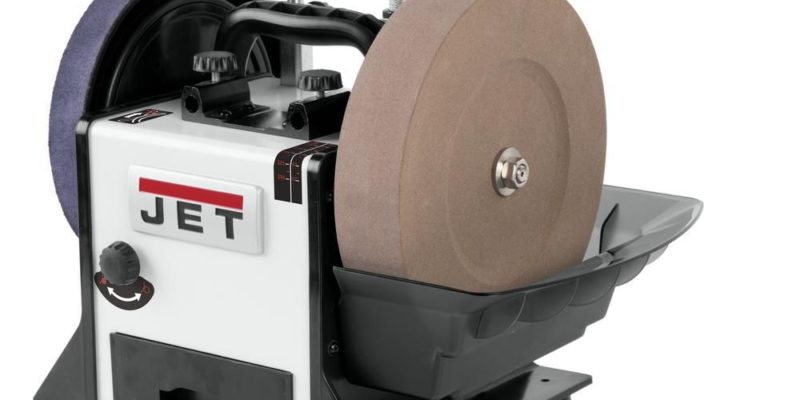 Typically, over the summer months, it’s not very appealing to have to prep and cook meals. It’s usually hot out…and the thought of working over a hot stove just doesn’t make very much sense. However, that changes in the autumn, as the weather starts to cool. Visions of stews, soups, braises, and sautés begin to take prominence in our minds. Considering all of the knife work that comes with prepping these kinds of meals, a sharp edge is mandatory. A sharp edge, perhaps, that can only be achieved through the use of a top-quality wet sharpener like the new 10” model from Jet. We’ll explore that a bit in this installment of Tool News Nirvana, plus we’ll hear about new offerings from Festool, Klein, Milwaukee, and Empire. Let’s get right down to it!

German powerhouse, Festool, recently announced the release of their new dust extractor, the CLEANTEC CT 48 E AC HEPA. Available soon as part #576761, this tool makes a bold claim…NO MORE CLOGGED FILTERS. A properly functioning filter is essential to efficient dust removal. The AUTOCLEAN function automatically cleans the main filter regularly, keeping the suction level high throughout a job. Also, it’s OSHA Table 1 Silica compliant to keep the feds off of your back. Like other Festool dust extractors, it can serve as the base station for the wide variety of Systainer storage boxes, for ultimate jobsite portability. It’ll be available starting this month.

You know how Channellock-style pliers are almost always referred to as “channellocks”, even if they might have come from a different manufacturer? The model name of a type of tool can sometimes become more well-known than the tool itself. “Sawzall” is one of those model names. Ever since Milwaukee invented this archetypical reciprocating saw in 1951, the term “Sawzall” has become canon in the construction industry. The updated M18 FUEL™ SAWZALL® Reciprocating Saw builds on that legacy by offering the fastest cutting recip saw on the market. It’s also the most durable SAWZALL® that Milwaukee has ever produced. Key upgrades: an updated slider-crank mechanism, an anti-corrosion blade clamp, and a metal-reinforced battery connection point. Additionally, the model equipped with One-Key™ connectivity offers a bevy of programmable cutting options for the most specific of situations. It’s available for pre-order now.

The #65200 Electrician’s Mini Ratchet Set, now available from Klein, is the perfect solution for installing fasteners inside of very tight spaces. Tight spaces like under the driver’s side dashboard of a late 90’s Subaru, where a home mechanic has to figure out how to install a cruise-control circuit box in a location with 3 hidden screws and less space than the inside of a coffee mug. Not that I’ve had firsthand experience with that or anything. Hey Klein – where was this ratchet set 15 years ago when I really, really, desperately needed it? Included in the kit are ¼” and 5/16” nut drivers, a ¼” adapter and four drive bits: #1 and #2 Phillips, 3/16” and ¼” slotted. The ratchet itself has a 72 tooth ring, so it only needs a 5-degree sweep to operate – which is actually really impressive. Look for it now.

Hone a Razor Edge with JET

While you were busy with your Twitters, TikToks, and Facebooks, venerable manufacturer JET was busy studying the blade(s). Planer blades, chisel blades, and knife blades, to be specific. The JWS-10 wet sharpener is the fruit of all of that study. It features a 10”, 220 grit wheel for material removal, plus a 9” leather strop wheel for getting that final hone dialed in. Also included are numerous sharpening-specific features, such as positioning jigs, support arms, and an angle measurement device for ultimate accuracy. An oversized water reservoir ensures that the stone remains cool, meaning that whatever you’re sharpening remains cool as well – leading to a strong edge that lasts. It’s available now.

Level Up With Empire

Empire recently released two new products to their measurement line – the 75’ Self-Leveling Cross-Line Laser and the 125’ Self-Leveling 3-Point Laser. Both are green lasers, for extra fancy-points around Christmas time. Just kidding, the human eye is significantly more sensitive to green light, meaning that green lasers can be easier to see on the jobsite. They both feature tripod mounts and rare-earth magnets for secure mounting. Additionally, they are equipped with a rugged rubber over-mold for impact protection (which should come in handy after you accidentally drop your brand-new laser after deftly avoiding catching an eyeful of green light). Look for these new models soon.