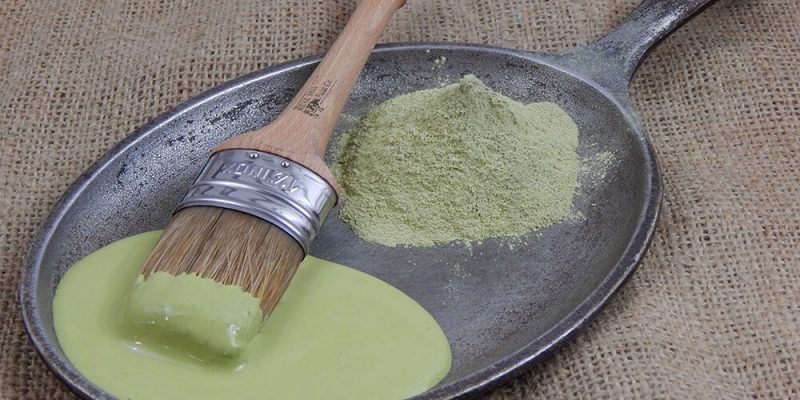 Although there are a number of companies out there selling milk paints, I eventually went with the Real Milk Paint Co. Right away, they got points for customer service. I had questions about shellacking the paint with sealant because an ongoing planter project has taken up a lot of time, energy, and money. The business promptly replied back. Although I prioritize affordability over customer service, I’m always more eager to support businesses that promptly answer emails from potential buyers. For those of you that are curious about the ins and out of using milk paint in your home or on your furniture, read on.

What I Liked About Milk Paint

I am a big fan of stuff that uses natural materials because such products are usually better for the environment and people with allergies such as myself. I also have a dog that thinks he’s a wood chipper and another that’s incredibly nosy. If they got into toxic paint, the consequences would be an exorbitant vet bill and a few sleepless nights. By comparison, the milk based paint is less likely to harm them if they knocked over a can. Milk paint tends to use all natural, food-safe ingredients and is therefore frequently marketed as safe to use around kids and pets. It is also a good option for coloring containers where you’re going to be growing food. Using this particular paint even eliminates the need for respirators and doesn’t require special disposal after you’re done with it. I sometimes get migraines from strong smells like bleach but I didn’t have any problems with Milk Paint.

The product came in a painting can with a black marble for mixing, and one bag of powder that was tied shut with a twist-tie. All I had to supply was the paintbrush and measuring cup. I liked the fact that the powdered pigment in the kit will keep indefinitely if there’s any leftover. That’s great for people that only want the paint to spruce up the odd item every so often. Mixed paint will, according to the website, keep for about 2 weeks in the refrigerator. I can vouch for the fact that it works well after about a week but the canister will need a good shaking before the paint is used again. Otherwise, the paint ends up watery and thin because the pigment will get stuck to walls of the jar. You may also want to take the precaution of covering the canister with a plastic or Ziplock bag when you store it to keep from accidentally covering your fresh vegetables and Chinese takeout in turquoise paint.

There was not a whole lot I didn’t like about this substance, other than the fact it was a trifle more expensive than some other low and no VOC paints I’d seen elsewhere. I paid around $30 for what makes up to be about a quart of paint. The paint itself was about $21 but shipping costs naturally added up to around $8. There are companies that sell cheaper milk based paints, specifically the Old Fashioned Milk Paint brand, but I didn’t like the idea of having to buy two jars of paint to get the color I wanted. I was particularly drawn to the Miss Mustard Seed’s colors as well and would have gone with them if either of the two colors I like had been on sale. I also saw recipes for homemade milk based paints online but I’m not a big fan of hunting all over town for obscure ingredients. I’m already going to be doing enough of that when I attempt to make my own carnivorous plant soil.

I had trouble getting the lid on the paint jar to close at first, which was unnerving. I was panicked that I’d get one planter painted but not the other. The result was that the first batch of paint mixed up a bit uneven in color and I didn’t do much better with the subsequent mixes. You have to shake the canister pretty thoroughly to avoid yellow-green streaks and powdery patches. Also, you’ll want to use exactly the same amount of water and powder or the paint can end up being more translucent than you’d like. The opposite is also somewhat true, that more pigment powder and less water results in thicker paint. I end up using two coats to completely coat the raw wood of the planters.

Anyone using this paint should note that it dries to a matte, almost chalky finish rather than a glossy one, so just keep that in mind if you plan on ordering. I also wish that I had been aware that the paint dries a few shades lighter than I anticipated. I had even picked out a color that was one shade paler than I actually wanted to keep it from drying to a dark hue. After all, around here darkly colored planters are a death sentence for whatever specimens are condemned to reside in them for the rest of their pathetically short lives. I was aiming for a bright turquoise, which the paint was when wet, but got the lovely seafoam green color shown above once it dried. Then again, this could be a fault of the color variations that naturally occur in different computer screens.

I would definitely use the milk based paint from the Real Milk Paint Co. again but hope I can find it somewhere local to avoid the shipping charges. What they charged was not exorbitant. I find shipping costs are just ridiculous as a general rule. I did also like some of the colors sold by Miss Mustard Seed Paints and would definitely give them a try as well, particularly if they were offering free shipping or had a sale on. If you like the paint colors sold by Old Fashioned Milk Paint, feel free to give them a try as well. They are definitely the cheapest US retailer that I was able to find.