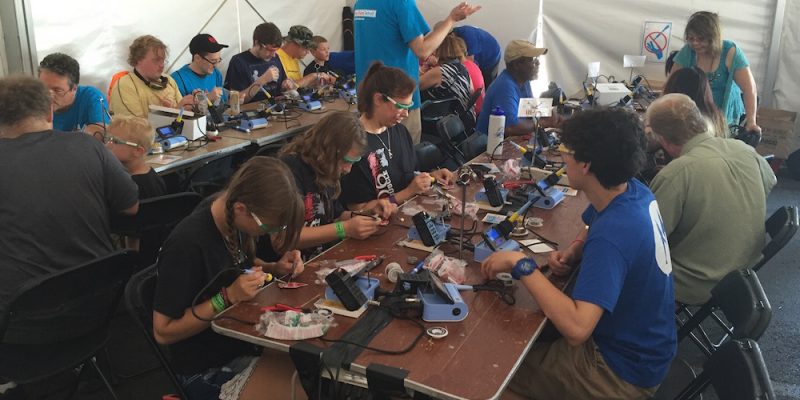 Detroit! The Motor City! Despite having fallen on some hard times, Detroit is still my favorite American city, and the 2015 Detroit Maker Faire was a perfect example of why I love the place. Great people with great ideas are making it happen against the odds. Garage entrepreneurs rolled out their latest 3D printers and laser cutters, right next to teams of school kids exhibiting amazing DIY robots. Traditional fiber artists and woodworkers hob-nob with hackers. If the Maker Faire is any indicator of what’s ahead for the Motor City, Detroit’s best years are still ahead of it!

Each July, Maker Media (the publishers of Make Magazine) partner with The Henry Ford museum in Dearborn, Michigan to “host two days of unconventional ingenuity, unbridled creativity and a whole lot of forward thinking.” I’ve been wanting to get to this event for the last several years, and this summer I finally made it. And it didn’t disappoint!

Hundreds of makers set up shop to display their products for sale, or just to show off their passion projects. In addition to the great outdoor displays, exhibitors set up inside the Henry Ford museum itself, sharing space with technological marvels from throughout American history. The juxtaposition between Henry Ford’s original assembly line and the cutting edge 3D printer displays made for a dynamic environment.

There were simply too many great exhibits to cover even a small fraction of what I saw, but a few of my personal favorites included:

SeeMeCNC: In the 3D printing category, there were enough entries for an entire article. Really fine looking machines from some big name companies were on display, as well as a lot of indie start-ups, which is really exciting. Most were “cartesian” machines that run on an XYZ axis. SeeMeCNC uses a “Delta” design, in which the printhead moves on three articulated arms. SeeMeCNC was exhibiting their 15 foot high delta printer, which demonstrates the scalability of the delta design. Another thing I like about the SeeMeCNC guys is that they run an open-source project with a very active community of users.

Detroitus: A giant coackroach car / mobile sound system. Yes, you read that right. From the creator: “Set to be the symbol of Detroiter survival, I have created a rocket powered cockroach-inspired sculpture on the frame of a Honda Civic that has been “totaled” four times in separate accidents. Kinetic arms and legs along with inspirational music will lure you into a world of insect defense systems highlighted by multiple interactive components, in this one of a kind work of art.”

FIRST Robotics Competition: Founded by entrepreneur Dean Kamen (who invented the ultimate nerd transportation device, the Segway), FIRST (For Inspiration and Recognition of Science and Technology,) sponsors lot’s of activities like Lego League. ECYCLE RUSH is a recycling-themed Robotics game in which robots “score points by stacking totes on scoring platforms, capping those stacks with recycling containers, and properly disposing of pool noodles, representing litter. In keeping with the recycling theme of the game, all game pieces used are reusable or recyclable by teams in their home locations or by FIRST at the end of the season.”

Poor Man Props: Poor Man Props is a Southeast Michigan based Halloween prop building club. They build loads of crazy animatronic props for halloween, haunted houses and more. They also teach classes in prop building. Need a zombie to spring out of a casket for your living room? These guys can help!

PunkinBot: These folks build a pumpkin carving CNC machine. No, I am not kidding! Overkill? Maybe, but…it’s a CNC pumpkin carving machine! how cool is that? This was definitely a crowd-pleaser.

Cyberoptix Tie Lab: If you are a do-it-yourselfer or a shop monkey like me, putting on a tie is not your favorite thing to do. But dammit, I’m gonna look sharp in my Apollo Soyuz tie. These beautiful ties are made in Detroit and feature tools, schematics, blueprints and all kinds of other patterns that let you be yourself even at a business meeting.

This is just a cross-section of the exhibitors. I also: watched a teenage boy teaching people to make chainmail from hardware store parts, people flying drones with Virtual Reality headsets, tried out the American Welding Society’s virtual welding simulator, watched a troupe of steampunk acrobats, and met great people from a lot of maker spaces around the midwest. My favorite thing about it was watching young folks engaged in hands-on projects. In the Maker Shed, kids were lined up to learn to solder and build their first blinky electronics kit!

If you can, try to catch a Maker Faire near you. You won’t be disappointed! Regardless of your age or skill level, you will learn something new, and have a whole bunch o’ fun.