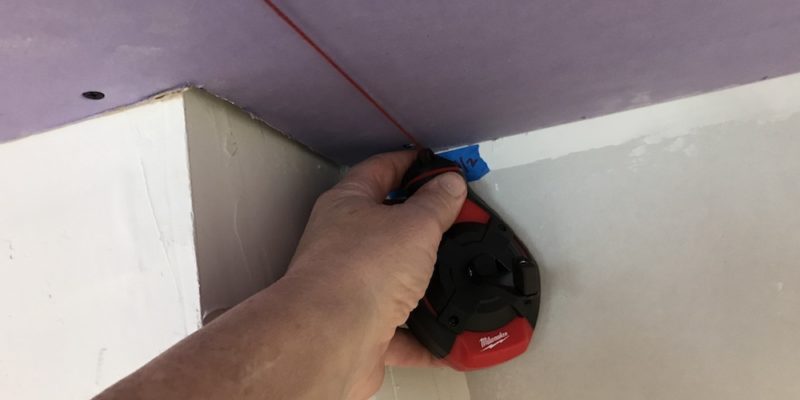 Get a bunch of framing carpenters or builders together, and ask them what their favorite tool is. Odds are, the lowly chalk line won’t make many “Top five” lists. Now check the tool belts for that same group. If you find one WITHOUT a chalk line, it’s probably because it just broke, and ended up in the dumpster. A sturdy, reliable chalk line is an essential tool for anyone who does layout work. The folks in Red just made a minor, but important, tweak to the Milwaukee Chalk Reel. They sent one along so we could take a Look at the new Hook.

The hook, you say? Yep. When the totally redesigned Milwaukee chalk reel came out in 2016, it was pretty much the same as the updated unit we just got, with the exception of that little piece of metal at the business end of the line. The original hook was plenty sturdy, but it had one feature that several users complained about: the opening near the bend at the end of the hook was rounded, rather than coming to a point.

Many users, myself included, frequently do solo layout work. In many cases you can snag the hook over the end of whatever you’re snapping the line on. Sometimes, though, you need to snap a line where there is no convenient edge. The quick and easy solution is to partially bang in a nail, and drop the hook over it to hold that end. The rounded end offered the potential for a wee bit of slop to enter the equation.

“Get to the point,” you’re muttering; and that’s exactly what Milwaukee did. They simply re-designed the hook with a pointed end, so when you slip the hook over that nail, it stays perfectly centered. A small thing, but Milwaukee’s tool peeps spend a lot of time in the field talking to the people who use their tools, and when they find an issue, they like to fix it.

Made primarily of plastic, the Milwaukee chalk reel actually looks and feels pretty robust. Not surprisingly, it’s black and RED, which makes it easier to find when you drop it in the grass or snow. The folding handle tucks into a little nook, to lock it in position in between tasks.

What sets the Milwaukee chalk reel apart, though, is what’s on the inside. The Milwaukee chalk reel is the first to use planetary gears, rather than the spur gears found in most chalk reels. This gearing setup puts less stress on the reels’s internal components by distributing forces equally over three gears. To protect the gears when the line gets yanked with a tad too much enthusiasm, or when it gets snagged on something, Milwaukee included a StripGuard™ Clutch.

The crank handle on the Milwaukee chalk reel has a push button at its base. Pushing it allows you to feed the line out quickly, without even releasing the handle from the “locked” position. When it’s time to reel that 100’ line back in, the 6:1 gear ratio gets the job done quickly, and depressing the button allows you to bring the handle around to the full upright and locked position.

Here’s the short, but full, list of specs from Milwaukee:

The Milwaukee chalk reel we got is a “Bold Line” chalk reel; Milwaukee also offers a “Precision Line” reel. Both reels use braided lines, which are stronger and provide a sharper line. The 1.5 mm Bold Line holds more chalk, so you can snap multiple – wait for it – bold lines. The .9 mm braided line in the Precision Line reels lays down a crisp, clean line, with minimal chalk spill, and the body is made of aluminum rather than plastic. The reels are available as bare tools, or in kits with a starter container of chalk.

The Milwaukee chalk reel is easy and intuitive to fill and use. The large cap fits snugly, but comes off easily, and the large body of the reel holds a good bit of chalk.

I most recently used the Milwaukee chalk reel on a drywall project, to lay out screwing lines on a ceiling. It left nice clear lines, without dumping a lot of extra chalk along the edges, as has happened to me with other chalk reels. I was able to get four good, clear lines snapped before I decided to reel it in for a fresh coating of chalk. I could have stretched it out and gotten an extra couple of lines, but hey, it’s chalk – no need to be stingy.

When I was finished, I fed out the entire chalk line, then reeled it in, and the line fed out smoothly, and retracted very quickly, with no tangling.

Ready To Not Get Tangled Up In Blue (Or Red?)

Whether or not the humble chalk line is in your Most Awesome Tools list, if you use one on a regular basis, you know how important it is to have a good one. Milwaukee is obviously pretty confident they’ve got a rugged, durable product in the Milwaukee chalk reel. You can try it out risk-free for 90 days, and they back it with a limited lifetime warranty. Not bad for ten bucks. Whether it’s boldness or precision you crave, reel one in and give its pointy little hook a try.

Buy the Bold Line reel from the Home Depot for around $10:

Buy the Precision Line reel from the Home Depot for around $20:

Or, Get an Amazing Deal with the Precision Fine Line Chalk Reel (with the old hook?) on sale for under $6 at Ohio Power Tool: