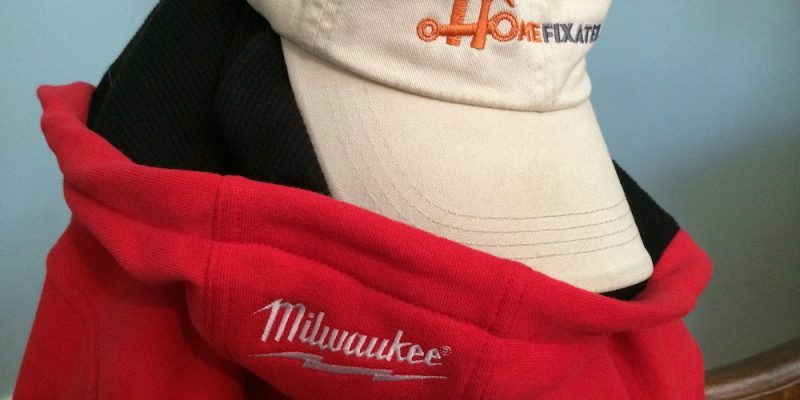 Many millenia ago, after graduating high school, and a brief, unsuccessful stint at a local community college, I went to work as a framing carpenter. Framing carpentry entails a lot of outdoor work, which I love. Since I lived in the Buffalo, NY area, however, this meant that a good part of the year was spent working in the cold and snow. This was back before every big storm was described as “Snowmageddon!!” or “Snowpocalypse!!” We just called it “Winter.” Back then, I still had metabolism to keep me warm. These days, I need all the help I can get, and usually resort to multiple layers, so I frequently resemble the Michelin Man. (My fondness for beer may also be partially responsible). A lighter-weight solution recently arrived, though, when we received a Milwaukee Heated Hoodie to evaluate.

Here’s the official skinny from Milwaukee:
• Durable carbon fiber heating elements distribute dependable heat to the core body area
• 3 heat settings, to provide the right amount of heat for any weather
• Durable cotton blend, built to withstand the toughest jobsite wear and tear
• Waffle-weave thermal liner and rib-knit cuffs for maximum comfort and heat retention
• Powered by the M12 REDLITHIUM battery: up to 6 hours of continuous heat on a single charge
• Washer and dryer safe
• Hood fits easily over hard hat
• Expandable battery pouch for use with all M12™ Batteries (48-11-2401, 48-11-2402, 48-11-2420, & 48-11-2440)

The Milwaukee heated hoodie is a recent addition to Milwaukee’s lineup of heated gear. They also have heated jackets, and our intrepid leader Marc fearlessly put one through its paces in the frozen wasteland known as southern California. The final item in the current mix is a heated hand warmer. This is likely aimed more at hunters and recreational users. Most crew foremen I know would have unkind words to say to any employees standing around with their hands tucked snugly away.

The hoodie I received to evaluate was the Milwaukee Red version with the big Milwaukee logo across the chest. It’s also available in black, gray, real tree camo, khaki, and high-visibility green. The Milwaukee heated hoodie is nice quality: It looks good, it’s well constructed, and it feels good, soft and comfortable. Mine is a size XL, which is what I normally wear. I’m 6’2” and around 190 pounds, and the sweatshirt is very roomy on me. So far, I’ve washed it twice, and it doesn’t seem to have shrunk at all.

Wearing it as an outer layer, I can wear a T-shirt, long underwear, and a flannel shirt under it, and still have plenty of room. I could probably get by with a Large if I didn’t layer up. There are two side pockets on the outside, but unfortunately none inside. The arms are plenty long, and give you great range of movement. The zipper is decent-sized, and stays where you put it; no wardrobe malfunctions here!

Bring On The Red, White And Blue

The Milwaukee Heated Hoodie takes any M12 battery. There is a small interior pocket in the left rear side for it to ride around in. The power cable comes out there, and connects to a power adaptor that slides around the post of the battery. The little 2.0 Ah batteries aren’t much bigger than the adapter, and are easy to drop into the pocket. The larger XC batteries are a little bulkier, but they still fit fine. Once the battery is in, shut the Velcro tab, and you’re ready to put it on and fire it up.

The power switch is the M12 emblem on the upper left chest on the outside of the hoodie. Press and hold it for 2-3 seconds, and it glows red, indicating the jacket is on high. Hit it again, and the light turns white, indicating medium power. Once more, and you’ve got the flashing blue light low power special. OK, it doesn’t actually flash, but it IS blue. Whatever power level you choose, the light stays lit until you shut it off, or it runs out of juice. This can make it tough to sneak off for a nap in a dark corner, and also tends to get you a bit of attention wherever you wear it. Finished with the heat, or ready to go low-profile? To power it down, press and hold the switch for another 2-3 seconds.

The heat is distributed through carbon fiber heat elements that snake through the chest, and the upper and lower back. They’re very unobtrusive; you don’t really feel them at all. The battery is a little different. When you first put the Milwaukee heated hoodie on, you’re definitely aware the battery is there, mostly just because of the bit of added weight and bulk. Once you get going, though, you pretty much forget it’s there. I’ve worn the hoodie for hours at a time, with no discomfort at all. About the only time I was aware of it was when I sat down to drive somewhere, and even then it can be shifted so it doesn’t dig in to your back.

Welcome To The Hood

I live in the winter wonderland known as the Northeast. This time of year (February, when I wrote this review), most of the projects I work on are indoors. Unfortunately, not all of that indoor space is heated. Bundling up in a bunch of layers to work in the basement or garage is a pain in the frozen butt, so I was looking forward to trying the Milwaukee Heated Hoodie to take the chill off my indoor endeavors.

For one of my test sessions, the outdoor temperature was in the single digits. The basement I had to work in, in a rental property, was probably somewhere in the upper 40’s. Downright balmy by comparison, I guess, but still… I had to disassemble some ductwork to figure out why almost no air was getting into the child’s bedroom above. The verdict? Eight or ten dolls and action figures and their assorted clothing, a VHS tape, a CD, a book, several other random small toys, and a bunch of candy wrappers. Go figure.

After that, I had some sketchy plumbing to tackle. Altogether, I probably spent three hours in the basement. Anyhow, with the Milwaukee heated hoodie, and a flannel shirt, I was warm and comfortable. I had it set on high for the first 20 minutes or so, and then dialed it down to medium.

To try it in the great outdoors, I figured I’d go out and take care of the daily 5” accumulation of snow. I layered up with a T-shirt, flannel shirt, fleece, the Milwaukee heated hoodie, and a Carhart sweatshirt jacket. Hey, it was 3 stinking degrees and windy, I have no metabolism, and yes, I’m a wuss! I was out for about 35 minutes, with the temp set on high. With all the layers, I was fine despite the wind, aside from my hands becoming frozen. Maybe I’m a candidate for a heated hand warmer after all…

While the heating elements in the Milwaukee heated hoodie are in the chest area and across the back, the back is where the heat is most noticeable. The hoodie provides great freedom of movement, and does a pretty fair job of taking the chill off. This is definitely a product more suited to working either in unheated indoor areas, where there is no wind, or during spring or fall when the temps won’t be quite so brutal. If it is worn outdoors in very cold weather, a windbreaking outer layer would definitely help the cause. For someone who has to work outdoors much of the time, in the cold and wind, Milwaukee’s heated jackets are probably a better bet.

Any room for improvement? The biggest issue is battery life. When I had the Milwaukee Heated Hoodie is set on the warmest setting, the compact battery was done in about 2-½ hours. This is understandable, because it’s a pretty small battery, and there is a constant drain on it, unlike when you use it intermittently in a drill. The 4.0 Ah XC battery did much better, keeping the heat on for over 6-½ hours. If you’re working an eight-hour day, you’ll need to swap out the battery at least once. This means you’ll probably have to take the hoodie off. It’s pretty cumbersome to change out the battery while wearing it, but quick and easy when it’s off. A spare battery is a must, and luckily the M12 batteries charge very quickly; mine are always good to go in 30 minutes or less.

My only other gripe is that my arms still tend to get cold; I’d love to have heated sleeves. I’m not sure how practical that would be, though; with the arms being in motion much of the time, the flexing might put too much stress on the heating elements. Also, the additional heating elements would drain the battery even faster.

For the Wish List: As I mentioned, there are no inside pockets. An inside chest pocket would be very handy to have, for stashing a cell phone or wallet. Also, the heated jackets have a USB port, so you can charge that cell phone, and a battery meter, so you know how much juice is left. Bring that tech here!

All that bitching aside, I’m guessing anyone who has to work in the cold would be happy to have one of these hoodies. The warmth the hoodie provides will let you shed a layer or two, and make it easier and more comfortable to move around and do what you gotta do. Mr. Fashion’s suggestion on color? I really like the red, but found myself worried about getting it dirty. For a while, anyhow. Go with one of the darker colors, or the high-visibility green, which is black on the bottom half for just that reason.

As I write this, it’s mid-February, and the current temperature is -8 and dropping, after reaching a high of -2. Tomorrow, it will be warming up to a balmy 12, before nosediving to -15. To us wussies, that’s kinda chilly; better get my batteries lined up by the charger. I’m actually wearing the Milwaukee heated hoodie right now, to take the chill off. My wife stole it the other day; we keep our house on the cool side (64 during the day, 59 at night), to try and keep the gas bill under $400 a month. So now I have to hide it, and it ain’t easy hiding something quite so RED. I think I might need another one, maybe in camo… The Milwaukee Heated Hoodie is available in sizes Small – 3X, comes with a one-year warranty, and can be purchased separately or in a set including the charger and compact battery. 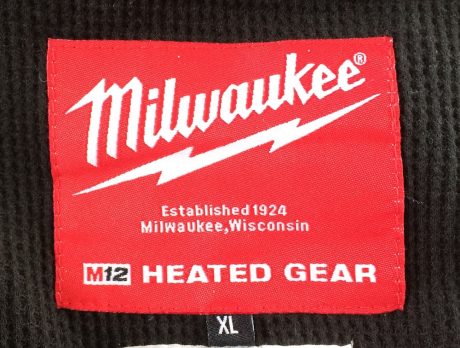 Our sponsor Ohio Power Tool carries the Milwaukee M12 Heated Hoodie, with prices ranging from $99-149 depending on sizing and color.