Way back in 2011, we posted our exhaustive review of the innovative Milwaukee M12 Heated Jacket, and also broke the news that a camo version was hitting the market. In that review, we braved the brutal wind chill of San Diego, fearlessly weathering the elements knowing an M12 battery had our back (and the rest of our torso). By “weathering the elements” I of course mean “slightly less sunny days.” I also discovered the M12 jacket is not only a great conversation starter, but it’s great for picking up women (and men too). In fact, if you’re single, wearing the jacket with it’s glowing power indicator might just land you a date faster than eHarmony. My wife was not impressed with these features. As awesome as the jacket was, I found version 1.0 lacking some key elements. The new version of the jacket not only addressed my concerns, but it also had a couple surprises up its sleeves.

“I’d also like to officially throw my vote out for a black version.” Those were my exact words in my first review. Naturally, since all HomeFixated articles are immediately read by Milwaukee’s CEO, he immediately decreed a black version be created. They thought about calling it the “M12 Heated Jacket – HomeFixated Edition” but ultimately decided that would be too controversial. Suffice it to say, we think the new black color option is awesome, and we suspect it will be a hit for those looking to make less of a statement than the camo or fiery red versions. Milwaukee also released a neon yellow High Visibility version of the jacket for folks that run around cars, trucks, bulldozers and other things they want to avoid being crushed by. The High Vis version also has a large back panel that can be embroidered (without destroying the heating element) in case you want to put a giant HomeFixated logo, or snarky comment like “If you can read this, then you’re too close” on your jacket. 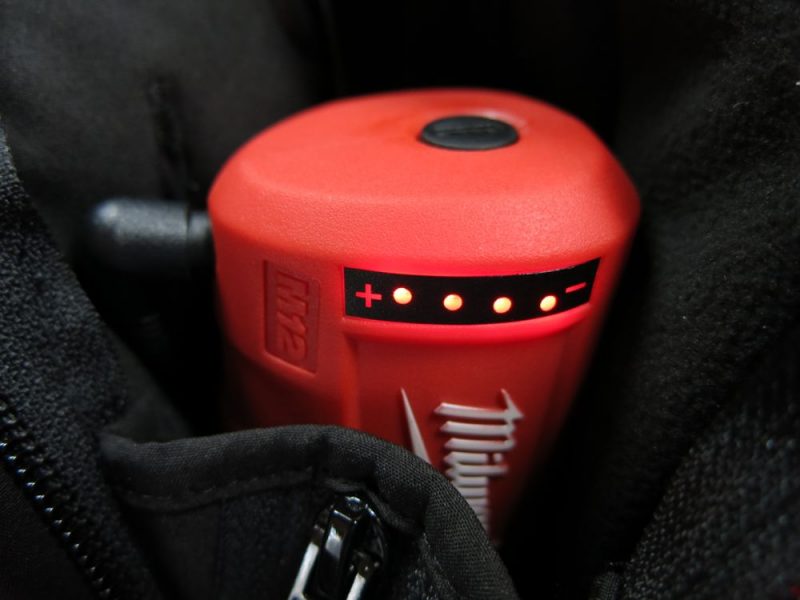 “I think a fuel gauge for for the battery would be cool.” As with the black color request, my original review’s suggestion for a fuel gauge went straight into the production line. After a couple outings with the orignal jacket where I thought I was leaving the house with a fully charged battery, I was definitely missing the fuel gauge I have become so accustomed to using on just about every recent cordless tool. Happily, the newer M12 jackets sport a redesigned battery unit that, among other things, displays your fuel level with a quick button press. Your battery juiciness is displayed for several seconds via four discreet LED’s. If I leave with a juice-less battery now, I have no one to blame but myself.

“I’ll just toss out a product suggestion here: a hand-warming element and hand-warmer heat setting on the power button would be really cool (or hot).” Check! Not only did Milwaukee implement this feature, but they did it exactly as I would have hoped. Instead of a single power button / status display, the new Heated Jacket has two buttons right next to each other. One button controls the main heating elements, the other controls hand warming elements in the pockets. While you shouldn’t expect to sear a Tuna in either pocket, the hand elements put out enough warmth that your hands will thank you for a reprieve from the elements. 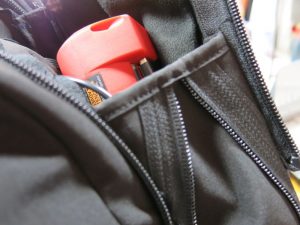 The newer Milwaukee Heated Jacket has an expanded battery pocket (left side, small of your back) which actually unzips for extra capacity to fit not only M12 and XC battery packs for up to six hours of toastiness, but can also handle even more juice:

The M18™ Power Source (49-24-2371) will be available to cater to the growing M18™ user base that demands increased jacket run-time. Compatible with both M18™ XC and Compact battery packs, this accessory will provide up to 18 hours of run-time on a single charge. . . the M18™ Power Source will fit into any Milwaukee® Heated Jacket with the expanded battery pocket (all Season II and Season III Jackets).

You read that right, “up to 18 hours of run-time”! If you’re standing in the cold for 18 hours straight, I highly recommend a vacation in San Diego.

If your preferred means of locomotion is via heavy equipment or riding a ATV or snowmobile, Milwaukee has even more juice available for you. The Heated Jacket 12v DC Plug Adapter (49-24-2301) is compatible with all Milwaukee Heated Jackets and sports a 7-foot coil cord. As long as your 12v adapter is putting out juice, you can expect your Heated Jacket to continue to keep you toasty. So, whether you’re riding an ATV, or your 1970’s commute vehicle no longer has a functioning heater, Milwaukee has you covered.

A Feature Geeks & Contractors Both Love 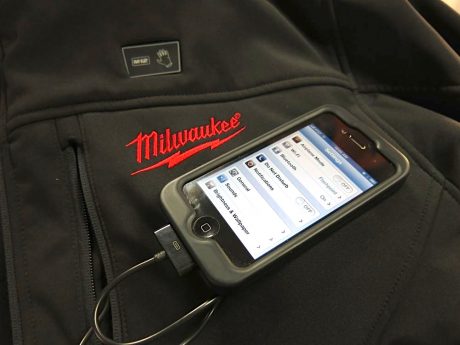 Geeks and Contractors don’t often occupy the same target demographic for a product, but I think this jacket is an exception. One feature I didn’t suggest in our initial review of version one was the addition of a USB charging port to the battery housing. Genius! The other day I was on the go for the entire day and realized I had forgotten to charge my phone the night before. I brief flicker of panic washed over me as I contemplated my soon to be barbaric, disconnected, and bitterly isolated existence without my smartphone. Luckily, I quickly realized I had installed a USB charging cable into the jacket so I could take advantage of the jacket’s new USB port. I happily pulled the plug out of my chest pocket and plugged into my phone, which stayed powered up with me the rest of the day. 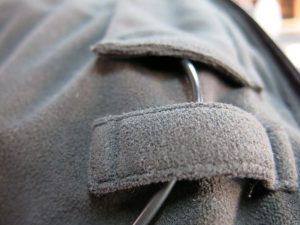 What’s really cool is that Milwaukee created a secret cable path running from the battery pocket, inside the jacket and into either the lower or upper pockets on the left side of the jacket. Little cloth tabs with velcro keep the cable out of the way and tangle-free. I now want to run a microphone cable, video camera or possibly satellite dish connection to my pockets, just because I can, thanks to the cable routing. One thing that’s important to realize with the USB charging is that you’ll need to press the fuel-gauge button at the top of the battery pack to start delivering juice to your USB device. In other words, you can’t just plug in your phone and have it charge. Ideally, I would have preferred an auto-sensing charger, but that may have been undesirable in terms of battery drain or other technical reasons above my pay grade. Bottom line, the charging feature can be a real life-saver, just remember to hit the button on the battery pack to fire up the charging process.

Performance and Testing
You may wonder how a guy in San Diego goes about testing a heated jacket. While I considered asking local grocery stores if I could hang out in their walk-in freezers, I decided I wasn’t willing to go quite that far in the name of product testing. I saw that MythBusters episode where they drank alcohol and hung out in a walk in freezer to test the theory that hard alcohol can hold off hypothermia. The process (other than the drinking part) looked like it would be pretty uncomfortable, even with a Milwaukee heated jacket. The potential headline for this review, “Slows the Onset of Hypothermia” also did not seem very compelling. Instead, I opted for the Snoopy Test.

This rigorous test involved traveling to northern California (where it actually snows!) and visiting the Charles Schulz ice skating rink, also known as Snoopy’s Home Ice. There I stood for what felt like a very long time watching my daughter and sister-in-law ice skating. I deliberately was not skating so I could avoid generating excess body heat that might skew my perception of the jacket’s warmth. Actually, I was not-so-secretly avoiding ice-skating. It turns out ice-skating avoidance is great for testing heated jackets. I basically stood inside a cavernous, very cold uninsulated structure, moved very little, all while in close proximity to a giant block of ice.

While many were in full winter expedition gear, not much stood between me and the icy elements other than the M12 jacket. I had both the body and handwarming elements cranking the entire time. This resulted in a fair number of quizzical looks from people (which I interpreted as envy), but it also resulted in me staying quite comfortable. While others were rapidly retreating to the fireside warmth of the “Warm Puppy Cafe” and its various heated beverages, I was able to watch the public spectacle of tail bone bruising, also known as recreational ice skating. Needless to say, the M12 heated jacket passed the rigorous Snoopy test with flying colors, and kept me cozy during several outdoor excursions with far chillier temps than San Diego has to offer. 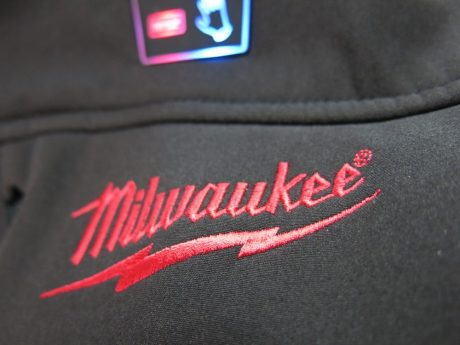 Now that so many colors are in the mix, we’d really like to see a dark blue or green edition. Just kidding Milwuakee! The chances of Milwaukee going with a “Bosch blue”, “Hitachi green”, or even “Rigid orange” are about as high as the elevation in Death Valley. With all the improvements in the new jacket design, we can’t find much to complain about this time around. The only mild complaint is that the battery can be a little tricky to swap out while wearing the jacket. Sure, you could take off the jacket, but who wants to do that when it’s worth wearing a heated jacket to begin with? Shifting the battery pocket slightly forward and angling the top of it forward might make for more ergonomic access. Other than that, this new version is dialed-in. The newer generation of Milwaukee M12 Heated jacket has just about every desirable feature you can dream of, with the exception of a built-in espresso maker (which you can now expect to see in the next generation). With all the various battery and even corded options, you can go from portable power for a few hour outing to a full day+ excursion with XC or 18v options, to indefinite heat with a plug-in accessory. Milwaukee has all the bases covered. While there’s always room for improvement, we think Milwaukee did an amazing job incorporating all the innovation they did into their latest heated jacket wear. If you like staying warm on the job or at play, we highly recommend you order up one of the latest generation of Milwaukee Heated jackets via the purchase options below. Stay toasty San Diego!