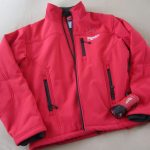 Alright, we know summer may not be the best time to review a heated jacket, but stay with us! We have breaking news on a new Milwaukee M12 Heated Jacket color option later in this review. Now back to our seasonally poorly timed review: It was early May in San Diego. Things were typical. Sunny skies, low 70’s, a light ocean breeze out of the Northwest. But then, something unthinkable happened. A brutal cold spell set in. The temperature dropped as low 67 degrees. People freaked. “It’s freezing”, “I might lose my fingers to frostbite”, “What are the first symptoms of hypothermia again?” and “brrrrrrrr” were just a few of the distressed comments you could hear from people on the street. This brutal unseasonal weather was the perfect testing ground for the Milwaukee M12 Heated Jacket. My biggest concern: heat stroke. Little did I know, heatstroke was the least of my worries, I would soon have chicks and dudes literally attacking me for the jacket.

When Milwaukee sent us one of their M12 Heated Jackets, I had no idea I was volunteering to test and review what amounts to a cordless, wearable Ferrari. What do you think of when you think of Ferrari? Bright red – check. Chick magnet – check. Hot – check. Attention grabbing – double check. Fast and Italian – well, this analogy only goes so far. In case you didn’t get the memo, Milwaukee is all about red. There’s a rumor going around (actually I’m starting it here), that the CEO mandates all employees must wear red underwear, embroidered with the Milwaukee logo, both on and off-duty. Right now, the M12 jacket is only available in red, but we have that shocking, non-red color news announcement towards the end of the review. Don’t even think about scrolling down yet!

My first mistake in the review process was wearing the M12 Heated Jacket to my four year old daughter’s swim and gymnastics classes. Once she and her violent mob of friends realized the power button lit up and changed colors, it was all over for me. I literally had small children climbing on top of me, all jostling for position to be able to change the colors of power button. I can’t blame them, it’s pretty fun to play with. The jacket has four different settings: Warm Up (The power button oscillates a glowing red), hot (a solid red), warm (white) and the San Diego setting to avoid heat stroke (blue). It’s also brilliant marketing by Milwaukee, people are drawn to the power light like moths to a flame. If the jacket weren’t so hot, I’d also strongly recommend it for your next rave or BurningMan outing.

A word of caution here. Based on my testing, the M12 Heated Jacket attracts children, women and men indiscriminately. Case in point, my trip to Starbucks. It was another unusual San Diego day. For one thing, it was raining (this happens one or twice a year here. . . only slightly exaggerated). It was also legitimately chilly (by San Diego standards). I’m not normally a Starbucks-kinda-guy, but my car was being worked on next door, and I had some pressing content to write for HomeFixated. I walked in out of the rain forgetting my jacket was still “on”, and by “on”, I mean glowing. As I was ordering, I had the experience I imagine a busty porn star has daily – the barista was totally ignoring what I was ordering and was staring at my chest.

“Sorry man, I was really distracted by your glowing jacket. . . . and you’re really handsome. What were you ordering again?” Did I mention the barista was a guy? Thus the “dude magnet” part of the title. I was in a liberal pocket of San Diego, so it wasn’t totally shocking. Happily, I’ve also found women strangely attracted to the jacket too. Notice I said “jacket” and not “me.” I even almost got felt up by one of my friend’s wives while I was sporting the jacket. The moral of the story is use caution when you wear this jacket, you just never know who you’ll lure in with the glowing light.

So, chick and dude magnet qualities aside, how does it actually perform? When it’s cold and you throw on the M12 jacket (and hold down the Star Trek-esque button for 2 seconds to power up), you’re almost instantly rewarded with warm heat. The Milwaukee heated jacket has its heating elements primarily around your chest and back. By doing so, the jacket focuses on keeping your core warm, which is critical to staying and feeling warm. I’m guessing Milwaukee put some thought into this, and it seems like a solid design. I was definitely more at risk of heat stroke than frostbite when wearing this jacket.

I expected the battery to be bulky, but for the most part it was unobtrusive. The battery housing while small, still seemed long-ish. There may be vital circuitry in there, so that may be unavoidable. Run time is quoted by Milwaukee to be up to six hours. If you plan on using the jacket all day, I’d definitely recommend keeping spare batteries close by. Once you deplete the battery, you’ll be like one of those lab monkeys depressing the button repeatedly for another hit of toasty goodness (just to clarify, the Milwaukee jackets dispenses heat, not . . . other things). Style-wise, the jacket is pretty slick. Two front pockets conveniently keep your paws warm. I’ll just toss out a product suggestion here: a hand-warming element and hand-warmer heat setting on the power button would be really cool (or hot). Then again, I have heard people outside San Diego wear these things called gloves. Aside from the two hand-pockets, there’s also a cell phone / contraband pocket on the left side of the chest. It keeps your cell within ear’s reach and the pocket’s zipper pull makes it easily accessible, even with gloves on. Milwaukee also thoughtfully added a soft, fleecy cuff that extends a bit from the end of the sleeves. Same fleecy action around the neck too. Aside from being comfortable, the fleece does a nice job reducing cold infiltration.

Overall I loved the jacket. Of course, I had a few minor nitpicks. One day I left with the jacket thinking I had a fully charged battery. By hindsight it had been used, and had been sitting for a week or so too. I think a fuel gauge for for the battery would be cool. It’s really depressing when you find yourself in the cold and reach for the power button and nothing happens. You suddenly feel very naked, even though the jacket provides warmth sans power supply. Plus, your ability to pick-up chicks and/or dudes (whatever your preference might be) is very limited at that point – you’re just wearing a red jacket that doesn’t even light up.

The heated jacket also had a slight chemically smell to it initially, which seemed to dissipate with use. The jacket is 95% Polyester and 5% Spandex, so it might have been treated for additional weather resistance. By the way, Milwaukee recommends hand washing only, and after battery removal (duh). Lastly, it was only available in Milwaukee / Ferrari red, which leads us to this exciting breaking news:

Today, Milwaukee has announced a new version of the M12 Heated Jacket with a few changes:

The new Realtree AP Camo version is tentatively set for an October or November 2011 release, and while it won’t appeal to most Starbucks baristas, we’re pretty sure it will appeal to hunters and fishermen, particularly outside of Southern California. The new design also sports a ninja-esque “special fabric blend to reduce noise during movement.” That means I might be able to make it in and out of Starbucks before anyone even hits on me.

I’d also like to officially throw my vote out for a black version. Red and Camo are two color schemes that don’t exactly have universal appeal. You’re making a bit of a statement with either. I think a black version would open up the market even more for Milwaukee, but then, I think just about everything looks better in black (Milwaukee tools excluded of course).

Summary and Where to Buy

Ultimately, the Milwaukee M12 Heated Jacket is one part high performance / high-tech apparel, and one part conversation starter. I found myself adjusting the temp settings according to my activities, which makes it surprisingly flexible for a variety of conditions, from San Diego cold-spells to parts of the country where the temp actually drops below 50 degrees. Based on the enthusiastic reactions from a pretty broad demographic, we think this product has a lot of crossover appeal too, beyond tradespeople and now, hunters. So, if you like being warm and if you’re seeking ways to entertain small children, score a date with your local barista, or hunt animals, you should definitely check out the Milwaukee M12 Heated Jacket.