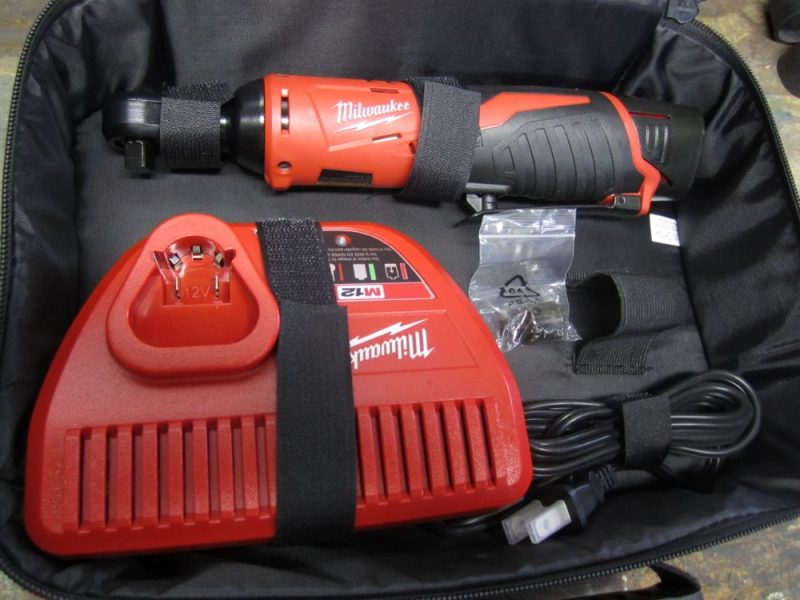 Milwaukee Tool’s growing M12 line of cordless products continues to bring more and more trades and versatility into the fold with each new model. Last year, Milwaukee added two M12 Cordless Ratchet kits to the mix (1/4″ and 3/8″). They sent us their 3/8″ model and we’ve been checking it out in and around the shop. I recently purchased a vintage golf cart (I don’t even golf, don’t ask), and, much like our older home, there are plenty of fix it up projects required on it. Unlike our house, most of the tasks require work with a socket wrench.

After rolling my new cart into the garage / shop, (notice I said “rolling” and not “driving”), it quickly became apparent the tires were in very sad shape. There was some speculation they might be original, which is pretty surprising considering the cart was made in the early 60’s. In fact, the tires were so old they had stretched to a point where they were rubbing against the metal frame of the golf cart. So, task number one for the Milwaukee M12 ratchet was ratcheting off and on lug nuts. Thanks to the wacky three lug design to attach the wheel to the axle, and an additional six lug nuts which attach the two halves of the wheel itself together, I had 27 lug nuts to deal with. Did I mention the cart is a three wheeler? Like our house, nothing is conventional on this ride, with the exception of nut and bolt sizing.

The main lug nuts were surprisingly easy to break loose. In fact, thanks to the M12 ratchet’s ability to manually apply torque, I was able to loosen them and then zip them off, all using the Milwaukee ratchet. For the six secondary lugs that hold the wheels themselves together, it appeared they had been tightened by the Six Million Dollar Man in the 1960’s and then never moved since. Since I didn’t have a heavy duty impact wrench handy, loosening these bolts required extraordinary efforts of raw, human muscle, violent measures, some minor acrobatics, and of course, a little targeted cursing. We left those stubborn, seemingly welded-on nuts to a heavy duty, manual socket wrench and then stepped in with the M12 once the lug nuts were broken loose.

The phenomenal thing about the Milwaukee M12 Cordless Ratchet is the tremendous savings in time and effort. Loosening or tightening a nut by hand can be a tedious and time consuming process, especially if you have a limited space to move a manual ratchet back and forth in. The M12 ratchet cranks nuts and bolts free at lightening speed, well, actually 250 RPM to be exact. It’s no Dremel Rotary tool, but it doesn’t need to be. Just tending to the 27 lug nuts I had, I easily saved half an hour of time vs. doing things manually. Even if you’re accustomed to using a compact pneumatic ratchet, the M12 still has a few attributes worth considering.

Advantages Of the M12 Ratchet Over Pneumatics
No Hose – More mobile and no hose to trip over or scratch the paint.
No Compressor – Keeps your shop more quiet and less cluttered.
Lighter – Most comparable air ratchets weigh in about a pound more.
Quieter – Some pneumatics can be downright obnoxious.
Compact – A lower profile ratchet head makes the M12 nimble.
Integrated LED – Air doesn’t power an LED light.

The only real downside when compared to similar pneumatic tools of the same stature is torque. The 3/8″ version M12 is rated at up to 35 ft-lbs vs around 50-70 ft-lbs on most of the pneumatics we looked at. Despite the lower torque stats, we didn’t find the M12 to be under-powered when used as intended. Let’s touch on a few of the M12 ratchet’s features in more detail.

When it comes to nuts and bolts, sometimes products weren’t exactly engineered for easy access. Motorized and mechanical projects often leave little room for tools, which is why we really liked the low profile head design. By recessing the directional switch in the head, there is little to obstruct your access in hard to reach places. While we loved the low profile design, we did find it somewhat challenging to switch with mechanic’s gloves on. We could still do it with the gloves, but it took some concentration. At times, I wondered if a well-designed body-mounted directional control might make more sense, despite being unconventional and potentially easy to accidentally bump.

Under the hoods of cars, behind motors, and the undercarriages of vehicles are notoriously dark spaces. For this reason, Milwaukee’s decision to add an integrated LED was brilliant. So brilliant in fact, that you may find the work space adequately lit without the awkward jockeying of a work light or flashlight. The LED does a very respectable job of illuminating a dark work area to the point where you can actually see what you’re doing.

Like many pneumatic variants, the Milwaukee M12 Ratchet sports a paddle-style trigger at the base of the tool. The trigger is made of metal for durability and is pretty easy to work with. There were a couple times we were using the tool one-handed and wished the trigger was more accessible while holding and supporting the tool near the head, but that would likely complicate design and potentially diminish actual usability of the tool. One thing we were not big fans of on this tool was the trigger lock. Its completely recessed design kept it out of the way but also made it very difficult to slide in one direction, even more so with a gloved hand. 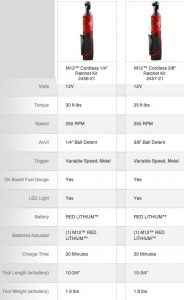 Milwaukee makes two models of the M12 for your ratcheting pleasure: the 2456-21 kit which sports a 1/4″ ratchet, and the 2457-21 (tested), which sports a 3/8″ ratchet. As you can see from Milwaukee’s product comparison, the only real difference between the two sizes is that the 3/8″ model offers slightly more torque (35 ft-lbs vs 30). Most people will probably choose the model based on the sockets they typically use, but the difference in torque might sway you as well. Keep in mind the 2457-21 3/8″ kit we tested also includes a handy adapter for 1/4″ sockets.

Even though the M12 ratchet has a steel reinforced housing and the ability to manually crank down on stubborn nuts and bolts, I still reached for a large traditional socket to break stubborn nuts loose first. This isn’t a beefy impact tool, and you won’t see these in your favorite Nascar pits taking lug nuts off. The tool is really designed for jobs with relatively light torque needs. With that said, unless you are bolting a skyscraper to a foundation, most nuts and bolts around the home and shop don’t require Bionic-level force to spin on or off. Thankfully, the Milwaukee Cordless Ratchet saves you huge amounts of time and effort, even if you have to use another tool for nuts that need to be broken loose or torqued down to a specific tightness. The M12 Cordless Ratchet is a great tool for the type of work it’s designed for, and we highly recommend it.