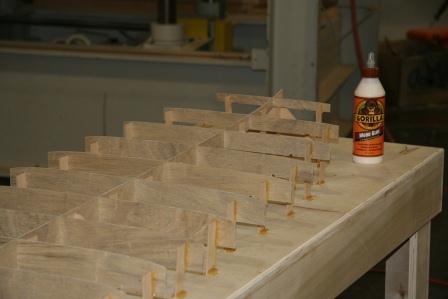 So in March I posted that I was going to make a wooden surfboard with my friend Jimbo. It could take a while, but WTF, I don’t like cold water anyway. It’s for the summer, baby! It’s just a hollow wooden surfboard, what could be so hard? What I didn’t realize at the time was that I could possibly be talking about next summer. FYI, any time you hear yourself say “This should be easy,” take a sharp stick and poke yourself in the eye. Then maybe you won’t let that happen again.

Update on the Surfboard-Building Table

I left off my last post having to make a table to work on. Following instructions from the 40 PDF pages I downloaded and printed, I immediately saw flaws in the design. There were no wheels, so you couldn’t move this guy around, and it was too small to put any beers on it while working. Obviously I did not plan on beers while working with power tools, of course.  But otherwise…  In reality, the only time power tools were needed after assembling the  base structure was a little sanding or trimming here and there using the Skil Multi Tasker I reviewed a few months ago.

Mobile table having been made (my partner Jimbo nixed the corner cup holders),the next step was to punch out the pieces needed for the main spar or stringer and the ribs that would form the outline of the board.

Next Step – Punch Out the Parts and Pieces

The kit that came with the plans consisted of a sheet of Luan plywood about 24” wide and 96” long, and the pieces pop out of it. Oh, did I neglect to mention the Luan is only 1/8” thick”? For $130 bucks you would have thought they could’ve sprung for at least ¼” thick stuff. But I whine and digress at the same time. I had the surfboard kit delivered to my house, and I immediately punched out all the parts on the dining room table to check them out. Awesome!

When in came my beautiful wife and social planner, to announce that dinner guests would be arriving in an hour. Who knew?

“I sent you an email reminder!”

Well, since I left work early to come home and open this bad boy up, I never saw it. That excuse of course carried no water. Which is exactly what I’m praying for this surfboard. My brilliant suggestion of party on the patio was met with such disdain that without a word I gathered up the parts and pieces, got out the dust buster, and begged for forgiveness while vacuuming and setting the table.

The First Step In Surfboard Assembly

I took all the now infamous parts and pieces to the Miller Woodworking shop the next day, Saturday, to start the process of assembling the interior structure of the board of my dreams. Or possibly a really good piece of art that we in the surfing world call a wall hanger. Board becomes art if it does in fact fill with water, or if the construction of it ends up making it weigh like a thousand pounds.

First I had to support the stringer so I could put on the ribs.  I set down some little sticks and used my trusty glue gun to glue them to the stringer so that they would hold it above the table by an inch or so, keeping  the stringer square and in a straight line. Each rib was numbered, so all I had to do was slip the rib over the stringer in order, and voila!  the interior of the board was born.

The stringer had a half dado that matched the dado on the ribs so I could just slide the ribs over the stringer and push down until they were flush at the top. OK, a few were not exactly flush, so I sanded them a little and was good to go. A little squirt of hot glue held everything in place.

Now before I move on to the next phase of this amazing transformation of sticks, parts, and pieces into a surfboard that Duke Kahanamoku would have ridden with pride, I need to warn you of the evil HOT GLUE GUN! Those of you who know, know. Those of you who don’t: Listen up. Hot glue is a living and evil thing. It is born out of the tip of a super hot pistol and if you touch it, you will regret it. You can’t get it off, it burns like hell, and if you try to wipe it off with your finger it attacks that second finger as well. 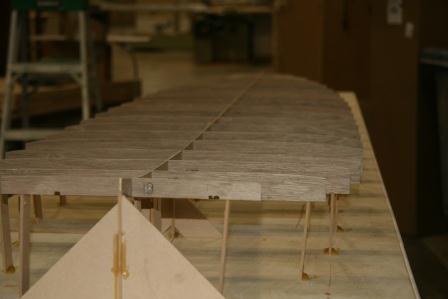 Here’s what you do if you haven’t heeded my advice. Wherever the evil glue has attacked, scrap it off against some wood or the corner of a wall or something. It will not stay hot for long, so just deal with it. Learn your lesson like I did with the dining room table, and you will be a better person -and with fewer disfiguring scars.