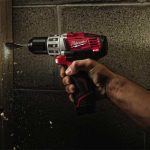 The Milwaukee M12 3/8″ Drill Driver 2410-22 packs a lot of features into a compact and light weight package. Milwaukee sent us this drill to check out and then put into the busy hands of one of our pro tradesmen, George of G Prewett Electric in San Diego, CA. Before handing the M12 driver off to George, we gave it a little look ourselves. I’ll dive into our initial impressions, which will then be followed by George’s in-the-field feedback. 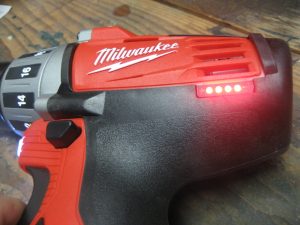 Like many of the tools in the Milwaukee M12 lineup, the 3/8″ drill driver sports a nice LED light for illuminating your work when you’ve crawled into a light-forsaken recess of your home. Why LED’s didn’t exist on power tools sooner, we will never know. The drill also features an LED “fuel gauge”, handy for avoiding unexpectedly running out of battery power. Rather than call it a “fuel gauge”, we like to refer to it as the “juice-o-meter.” I’m sure Milwaukee will immediately change the name once they read this. 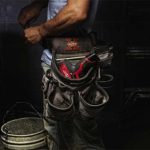 The M12 3/8″ drill driver sports really nice ergonomics. It has a compact but still beefy feel in your hand, and the forward / reverse switch is nicely situated. The drill also has some rubber bumpers around the frame of the tool to help protect it from mild to moderate abuse on the job. The M12 features two speeds, and the second speed really cranks! And with 250 in-lbs of torque, it’s surprisingly capable given it’s compact stature.

Tradesman On-The-Job Feedback:
George was happy to report that after several weeks on the job, the M12 Drill Driver still worked. This was cause for celebration because, frankly, many of George’s tools don’t survive that long. In fact, power tools have a shorter life expectancy with George, than they would in the relatively docile environment found in many DIY’ers garages. George attributes the short tool life span to “endless drops off tall ladders, skidding in and out of the tool bag, mud & rain, and being thrown in and out of the truck.” Like many tradesmen, George is known for his skills, not for being gentle.

George rated torque as “good for its size”, battery life as “excellent” and the LED light as working better than other similar models. Like us, he also liked the battery monitoring lights. He also found, “The chuck stayed when it was supposed to, and released with very little trouble.” George felt the addition of an impact feature would make this the dream driver.  But, we can’t always have it all in one tool.  George, whom Milwaukee agreed to let keep the tool after testing, was very happy to add the 2410-22 M12 drill driver to his tool box, especially since it “didn’t fry” during his gauntlet of electrical tasks and on-the-job torture.

The Milwaukee M12 3/8″ drill driver comes in a very nice protective hard case and includes 2 batteries and a charger. You can find the Milwaukee M12 2410-22 Drill Driver kit from our sponsor, Ohio Power Tool for a bargain $149.02.