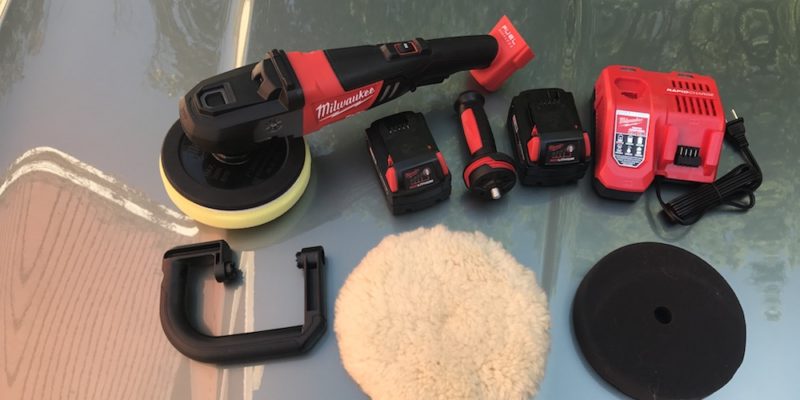 My son’s friend Cliff, a rabid car buff, posted the pic below with the caption “I like shiny fast things.” He has some sweet cars, and meets regularly with a group of friends who also like shiny fast things. These folks take a lot of pride in their rides, and generally do most of the detailing themselves. We recently received a cordless Milwaukee M18 Polisher to evaluate, and while it’s aimed mainly at detailing pros, my guess is Cliff and his friends wouldn’t mind having it in their garages to help keep their fast things shiny.

Cliff said he normally does his detailing by hand. He has a 6” random-orbit polisher, but he said it can be annoying to use, and makes his hands numb. He also said he sometimes takes his cars to a detailer, when they need a professional paint correction. I think that’s car-speak for “$#!^ – I scratched it!” They use the big-boy polishers, but he’s leery of them, because he’d rather not screw up his paint job.

Being a good detailer is definitely an art. Move the polisher too slowly, or spin the pad too quickly, and you risk burning the paint. Also, up until now, most polishers have been corded, because cordless polishers simply didn’t have enough power to get the job done – over and over again. That meant the detailer gets to drag a long cord around, generally draped over his shoulder. And if that cord happens to scuff a freshly-painted car, it’s back to the paint booth. And NOBODY is happy when that happens.

Enter the Milwaukee M18 Polisher, the world’s first cordless full-size rotary polisher. At only 6.4 lbs. including battery, the tool is actually a pound lighter than their corded polisher. The efficient brushless motor, combined with Milwaukee’s proprietary RedLink technology, provides enough power to buff all day. And without having to drag a cord around.

The tool has a rubber overmold around the front, to protect the painted surface from scratches. There’s also a removable dust cover, to keep wool fibers and other random undesirable debris out of the motor and electronics. To optimize control, there’s a variable speed dial AND an oversized variable speed trigger, which can be locked on. You can get exactly the speed you want, from 0 (probably the safest bet for me) to 2,200 RPM.

Here are the features and specs from Milwaukee, followed by a short video featuring some REAL detailers:

Getting Some Pertinent Details On The Milwaukee M18 Polisher

When I opened the box for the Milwaukee M18 polisher, and got a look at the random components, I decided to take a quick peek at the manual. It wasn’t so much that I couldn’t figure out how to assemble it; that was pretty obvious. You just have to decide whether to screw in the straight handle, which can be attached on either side, or to go with the bail handle. Then, you just have to spin in the hook-and-loop backing pad that holds the polishing pads.

No, being a detailing rookie, my confusion was due to the variety of pads. The kit came with two foam pads, one yellow and one black, and one wool pad. My impulse was to go with the nice, soft wool pad; after reading the manual, I’m glad I didn’t. Turns out that’s for applying compound and doing the heavy duty, big scratch jobs.

The second place the manual came in handy was related to speed. I was ready to go full speed ahead, while applying a fair amount of pressure. The manual helpfully told me “No, dumbass; unless you want to burn your paint, use a slow speed and keep that sucker moving.” They may have phrased it more politely, but that’s the gist of it.

A little more research clued me in to the fact that the yellow pads are for polishing, and black for finishing. Armed with my new knowledge, I charged up the two batteries, grabbed the yellow pad, and headed for the test site, aka our driveway.

Taking The Milwaukee M18 Polisher For A Spin

I decided the test vehicle for the Milwaukee M18 polisher would be my wife’s Subaru Forester, for three reasons. Reason one: Spousal brownie points. My usual modus operandi is “it’s easier to get forgiveness than permission.” From time to time, however, the scales must be balanced. Reason two: Her Subaru is a helluva lot smaller than my F150 SuperCrew. And reason three: Cliff refused to drop off a Porsche, despite the generous offer of a free rookie detailing job. Go figure!

Just because the Subie is smaller doesn’t mean it was cleaner. We are renovating an old farm house, which is located on a dirt road. This means that, depending on the recent weather, the car gets a good coating of either dust or mud. Fortunately, the weather had been pretty dry recently, so…dust it was. I got out the hose and bucket, and gave her car a nice bath.

Once the car was clean, it was time for the Milwaukee M18 polisher to shine. I had attached the bail handle, figuring I could use all the control I could get. I had also threaded the backing pad into position, and attached the foam polishing pad. I was skeptical of how well the hook and loop attachment would work to keep the pad in place; after pressing the pad into position, and trying to remove it, I was skeptical no longer.

The Milwaukee M18 polisher did a really nice job of spreading the wax around and buffing it. After reading the “burn the paint” warning, I dialed the speed back pretty far, and took the job slowly. Someone with a clue could probably have finished the job in far less time than the almost two hours it took me.

The polisher wasn’t overly heavy or hard to control, and I used it several times one-handed, to reach the center of the hood or roof. Just the weight of the tool was the perfect amount of pressure to get the polishing done. Using one of the 5.0 Ah batteries that came with the kit, I still had juice left when the job was finished.

Using a polisher really speeds up the detailing process, once you get the hang of it. There are some spots that still need to be done by hand – under the door handles, and between the door and the mirrors, for example. On the bulk of the car, though, the Milwaukee M18 polisher was able to get right in there and work its polishing magic.

Winter is coming, at which point we trade the dust and mud for snow and slush. When I do get motivated to get a good coat of wax on my truck, the polisher should be a huge time saver.

If you do detailing for a living, or you’re a car fanatic who obsesses over keeping your rides clean and pristine, I’m betting you’ll love the Milwaukee M18 polisher. It’s well-balanced, easy to control, and it works great. It can do everything a corded polisher can do – except trip you or drag a cord across your perfect paint.

The kit we got comes with two 5.0 Ah M18 batteries and a charger. Milwaukee estimates that it takes a pro roughly 45 minutes to detail an average car, and that a single battery is enough to get the job done. Ready for the next car? Grab the second battery, slap the used one in the charger, and by the time the next car is finished, the first battery is ready to play again. Do a lot of stretch limos, yachts, RVs or the occasional Lear Jet? Slide in a Milwaukee High Demand 9.0 Ah battery, and get to it.

The Milwaukee M18 Polisher is a solid unit; it looks and feels like a quality tool. It’s clearly aimed at the pro user, and should hold up well in a shop setting. Milwaukee obviously thinks so, too – they back the tool with a five-year warranty. If you’re tired of working all day with a cord hanging off your shoulder, pick one up and take it for a spin.

Buy kit for around $499 from HF sponsor Ohio Power Tool:

Bare tool for around $249 from Ohio Power Tool: