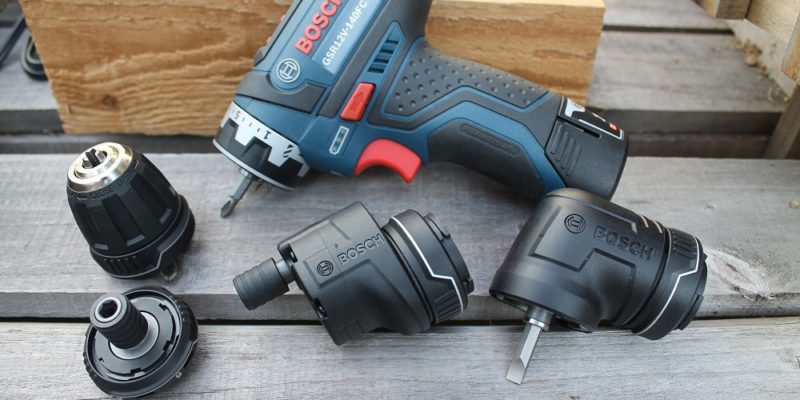 Have you ever had a tool that the more time you spent with it the more you realized just how incredibly useful it really is? That’s what I experienced when team blue sent us their brand spankin’ new GSR12V-140FCB22 12V Max Bosch FlexiClick 5-in-1 Drill/Driver System to bone up on in preparation for the release date. This powerful and versatile driver is perfect for most of your regular drilling and driving needs and – even better – for getting into those tight spaces that others simply cannot access. Well, today is the big day! Bosch FlexiClick is now officially available for purchase and you’re going to want to get in on the action. What makes the FlexiClick system so special? I’m glad you asked. Allow me to demonstrate!

My first impression was one of uncertainty and questioning. What’s with this weird collection of attachments? Is this one of those “Swiss Army” type novelty tools that promises to do everything, yet does nothing well? They’re kidding, right? What exactly is a caboodle and do I really need one? But then I held the various attachments. Their heft, rigidity, utility… And the driver itself; it appears to be of the same high quality I’ve come to expect from Bosch. Oh wait, Bosch is serious about this! I shall don my monocle!

In fairness, I’ve owned a similar looking, comparably-sized Bosch driver for almost 5 years now and it’s a workhorse (but only a straight driver with locking bit holder). So I already had a clue this might be worth a closer look. It turns out that what we have here is several tools in one – specialty and “regular” – that are actually as good as separate, dedicated tools, but at a fraction of the cost and bulk. What we have here is truly special.

Above, you can see the new Bosch FlexiClick driver (left) alongside an older Bosch PS20 that I’ve had for years now. The PS20 built the gargoyled gazebo featured here at HomeFixated early last year. Well, I helped a little. It easily powered through 20 pounds of Spax and GRK screws in this one project alone. That older unit included a pair of 1.3Ah 12V batteries; the FlexiClick, 2Ah.

Before messing with the attachments, let’s check out the heart of the system: the Bosch GSR12V-140FC driver, rated at 265 in-lbs. (max) with a top speed of 1,300 RPM. Without a hearty core, the system would be nothing. As far as I can tell, this is essentially the same 12V Max driver already on the market for $129, just with interchangeable heads. With the FlexiClick GSR12V-140FCB22 package, you’re buying a veritable suite of tools for a lot fewer shekels than they’d cost individually.

With the trend of 18V and higher tools, you’d be forgiven for wondering if, perhaps, 12V is not as desirable. But Bosch continues to prove that their 12V platform is far from dead. To the contrary, they’ve just improved upon it.

May The Power Of Bosch Compel You – Bosch FlexiClick

What the Bosch FlexiClick 5-in-1 drill/driver system lacks in caboodles (and honestly, I can’t say that I’ve ever needed one) it more than makes up for with the kit. The kit includes a pair of 2Ah batteries and a fast charger. Each battery took about 1 hour, 20 minutes from factory to full charge. Closer to 2 hours from “dead”. Not too bad.

As with most Li-Ion tools, the batteries incorporate electronic protective measures to prevent destructive deep discharging and other alliterative aggravations, giving you the maximum number of charge/discharge cycles and the fewest number of tongue twisters.

You Can Have What You Want, What You Really, Really Want And More – Bosch FlexiClick

Enough small talk, the FlexiClick 5-in-1 drill/driver System is all about the attachments. The basics are your standard 1/4” hex bit holders and a 3/8” keyless chuck. With no heads attached, the compact driver itself has a magnetic bit holder.

The locking bit holder secures your bit with an iron grip. It will never fall out or get caught in a screw head.

The keyless drill chuck adjusts with silky smooth action and firmly clamps onto bit shanks up to 3/8”, with little to moderate tightening effort. Just what you’d expect from a quality chuck. Though I did have it loosen once, it may have been my fault. Just check it every so often and you’ll be fine, as with any keyless chuck.

Personally, I’d have to think long and hard before purchasing a dedicated offset or right angle driver. I just don’t need either often enough to justify the expense, so when I do I’ve always begrudgingly resorted to wrenches, ratchets, sockets, and hand cramping contortions in their stead. And sometimes cussing. But now there’s an affordable option.

However, some of you – such as cabinet installers and electricians – may need such tools much more frequently. You will find Bosch FlexiClick to be the sweet granting of a wish you never thought to make. And now, you’ll never have to.

The right angle attachment is perfect for drilling or driving around corners and in tight spaces. It can be used alone – as an angled magnetic bit driver – or in conjunction with any other attachment and can be used at 16 different angles.

Tight spaces really benefit from the right angle head. Sure, you could use a wrench or ratchet. But if you can’t get enough swing it’s going to be a tedious job.

Let’s see how much of a difference this really makes.

We’ve seen how the various attachments transform the Bosch FlexiClick into a 5-in-1 drill/driver system. But let’s not overlook the other features: a variable speed trigger, variable torque clutch, reversible drive, built-in work light, onboard battery indicator and 2-speed gear shifter. Vroom-vroom!

The trigger is always a variable speed controller, but the gear shift switch offers two speed ranges. According to the manual, low gear gives you high torque (up to 265 in-lbs) with a slower top speed and high gear permits speeds up to 1,300 RPM.

As far as I can tell, the gear shifter only affects top speed and not torque.

When you need consistent torque – or just want to avoid driving screws completely through your workpiece like a total noob – the variable torque clutch is your friend.

In drill mode, the GSR12V-140FC FlexiClick driver was able to hog out a 2” core from this 2-by construction lumber, cutting half way from each side and meeting in the middle.

Granted, a hole this size is a little much for a compact drill. But it does have the oomph to make it through. Just don’t expect the greatest charge endurance under such a high load; it will definitely drain the battery a lot faster.

I appreciate when companies include storage/carrying cases with their hand-held tools. But they usually fall short of the mark. I end up throwing away most blow molded cases because they waste space; and because trying to fit the tools back in is often a needlessly frustrating puzzle.

On the other hand, soft carrying bags usually lack sufficient compartmentalization, so the various pieces are allowed to tumble around and bang against each other. But why? Seriously, why is it so difficult to make a storage case that doesn’t suck? I can’t be the only one to notice this foible shared by most – if not all – power tool brands. Bosch was so close with this one! Three more elastic loops would have done the trick.

So the bag leaves me wanting. But it does have some utility and in no way detracts from the tool itself. After all, it really is a fantastic tool. No doubt I’ll be whining about afterthought cases with virtually every power tool I ever own, until I, myself, am the elderly male equivalent of a useless old bag. By that time I’ll be too old to care. You may be too.

Bosch FlexiClick 5-in-1 Drill/Driver System – This Is What Awesome Looks Like!

In the end, FlexiClick is a multi-tool system worth more than the sum of its parts. Each attachment actually works as well as you’d expect from a dedicated tool of the same type. Far from a gimmicky pseudo-Jack of all trades, master of none, this is a professional quality tool that delivers the goods.

The Bosch FlexiClick 5-in-1 drill/driver system is hot off the press as of today. You can learn more about it and find a dealer near you by visiting www.boschtools.com