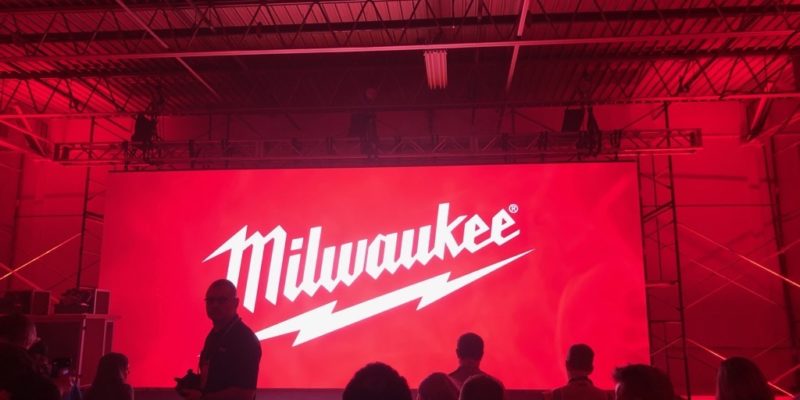 I just attended the Milwaukee New Product Symposium 2018 and was impressed with the latest and greatest from one of our favorite tool companies. It was my 11th visit to the event, I’ve been there since the start, and it’s amazing to note the arc of cordless progression in the last decade or so. From cordless tools that did what you expected cordless tools to do expanding to models that can outperform corded tools, it’s been a noteworthy progression. And Milwaukee’s goal for rechargeable battery power is to challenge tool fuel sources of all types, not just electricity from the grid or generator. This includes compressed air, gasoline, gas fuel cartridges, disposable batteries, and even hydraulic rams and good old fashioned elbow grease. Let’s look at the top picks for Milwaukee tools coming out in 2018.

To facilitate tools with higher power, Milwaukee kicked off the event with the introduction of batteries that pack more power. Positioned above the current biggest 9.0 HD pack is the new 12.0 Ah High Output pack, and similarly, the new 6.0 Ah HO pack is the next step above the existing 5.0 XC model. This isn’t just a race of numbers, the new battery packs are built with larger cells and ever-improving chemistry formulations. Milwaukee claims that these new packs contain 50% more power than the 9.0 HD packs to provide faster application speeds while staying cooler. And speaking of cool, the new packs can operate in ambient temperatures as low as -20 degrees F.

Forward and backward compatibility is the key to keeping users moving forward along with the product line. To keep that all going smoothly, the electronics in some high-demand FUEL brushless tools can recognize the pack plugged into it and adjust the draw on the batteries differently. This won’t get you the highest productivity, but it does allow the brawniest new tools to play nicely with the mildest-mannered old battery packs without harm. If a new tool comes packaged with the largest new battery pack, you’ll most likely get the best experience with that combination, especially under heavy loads. And if the new 12.0 HO pack won’t fit in your work light or other tool with a battery enclosure, Milwaukee service centers will provide free upgrades to those parts.

One notable part of the event was the introduction of Milwaukee’s first-ever table saw. And staying true to form with the brand’s battery-powered job site vision, of course it’s a cordless 18-volt portable model. The saw rips to 24 1/2 inches wide, bevels to 47 degrees, features a rack-and-pinion fence adjustment system, and includes Milwaukee’s One Key inventory management system with tracking and control electronics. In the 2736-21HD kit, this saw will sell for $549 with a 12.0 battery and charger.

An important part of the escalation of cordless tools growing to overpower their corded counterparts is happening with circular saws and reciprocating saws. Already, these tools will never need cords again in my experience as a tool tester. Milwaukee’s first cordless Sawzall to earn the name Super Sawzall was released, and is claimed to outrun it’s 15 amp corded cousin. The new 2722- model cuts in both linear and orbital modes and has a maximum speed dial revving the saw up up to 3,000 strokes per minute. A rafter hook and LED headlight add to the feature set. 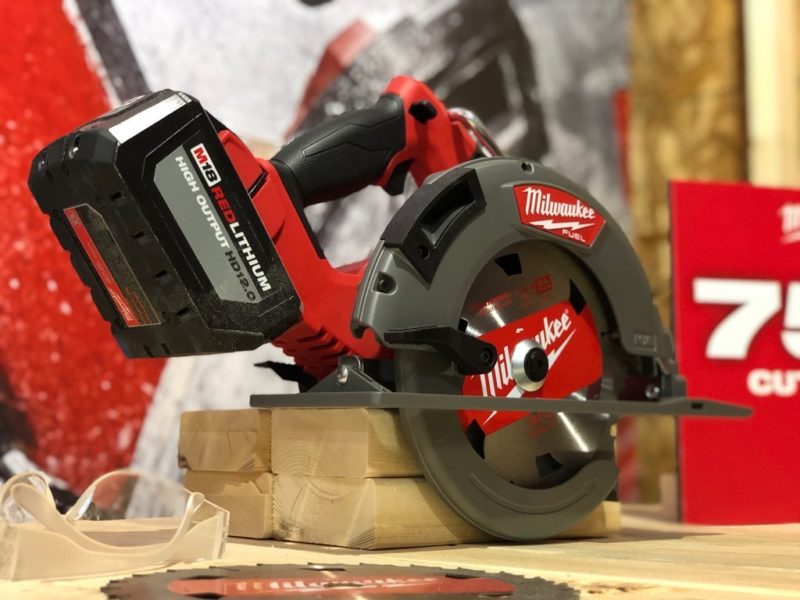 In circ saw news, the current FUEL brushless-motor 7 1/4″ circ saw will be replaced with a similar saw, but without the FUEL name. Since brushless motors are being used on a wider range of cordless tools now, the FUEL nameplate is only being affixed to the heaviest-duty model in its part of the product line now. Along with the new mid-line saw is the new FUEL heavy duty model that is designed to out-cut corded tools. Backing up all that power is some bulk though, the saw and battery is big and heavy so it’s a good framing cut station saw, but might not take one of the brand’s lighter saws out of a contractor’s hands for general remodeling work. Look for this big beauty this summer with the 2732- model saw packed with a 12.0 battery for $399.

A 9 – inch grinder is a tough tool to power with batteries, which makes it a hot target for competitive tool makers. Milwaukee is the latest in the race with a new grinder that runs 7 and 9 inch wheels, and they are proud of the fact that it is powered by a single 18-volt battery pack. They are also proud that the cordless 2785- model weighs two pounds less than their comparable corded 9 inch grinder.

The tools that started the revolution, drill/drivers, can’t escape cordless tool line improvements for very long. So the 3rd generation 2803- drill and 2804- hammerdrill FUEL models were revealed too. The head of these tools are noticeably shorter than previous models, and if course they are cited as more powerful. The claimed 60 percent increase is said to make these latest versions work twice as fast when under heavy loads.

As a true chain saw fanatic, I mean aficionado, I saved the most fun FUEL tool for last. Yes, Milwaukee now has a 16–inch bar chain saw to add to their cordless OPE line. I shaved slices off a fresh ash log over a foot in diameter and buried the bar in the end grain and it passed my initial testing quite admirably. The saw has pro – style steel bucking spikes and a two – nut bar mount mechanism which needs a tool to adjust. The required scrench is pretty compact and clicks into the bottom of the saw more securely than others I’ve used. The free chain speed is over 40 feet per second and it seems to keep up pretty well under load. Like other good chain saws, this model has an anti-kickback chain brake for safety, an automatic oiler, and a motor brake that stops the chain the instant you release the trigger. The 2727-21 kit will pair the saw with a 12.0 battery for $399.

I was not expecting a random orbit sander, and it’s a good addition to the overall 18-volt cordless line. The sander has a variable speed dial to set the sanding speed from 7,000 to 12,000 opm. The sander has a large dust collection box with a filter that also connects to a vac. A single charge of a 3.0 Ah battery is claimed to provide up to 35 minutes of run time. The sander will cost $99 as a bare tool or $199 kitted with a 3.0 Ah battery.

Another great new release is Milwaukee’s cordless backpack vacuum. The unit can be worn, carried, or hung on the wall, and it provides whisper – quiet cleanups free from dragging a cord around the work area. The clear canister in the back let’s you evaluate the debris level at a glance, and did I mention how quiet it is? Man, it’s quiet! The hose and telescopic extension wand shrink down for storage on the side of the unit, and when running, the whooshing sound of the air through the nozzle is probably louder than the motor sound itself, it’s just that quiet.

A famous quote says “always leave them wanting more” so you might also want to check out the new D-handle and barrel grip FUEL jigsaws, the first monster cordless impact wrench with a 1-inch drive, the cordless abrasive rotary cutoff tool, and the universal – fit Dust Trap that collects concrete dust with or without a vac with OSHA compliance. Check out our Instagram account (which you’re already following, right?) for all over live coverage of the event. 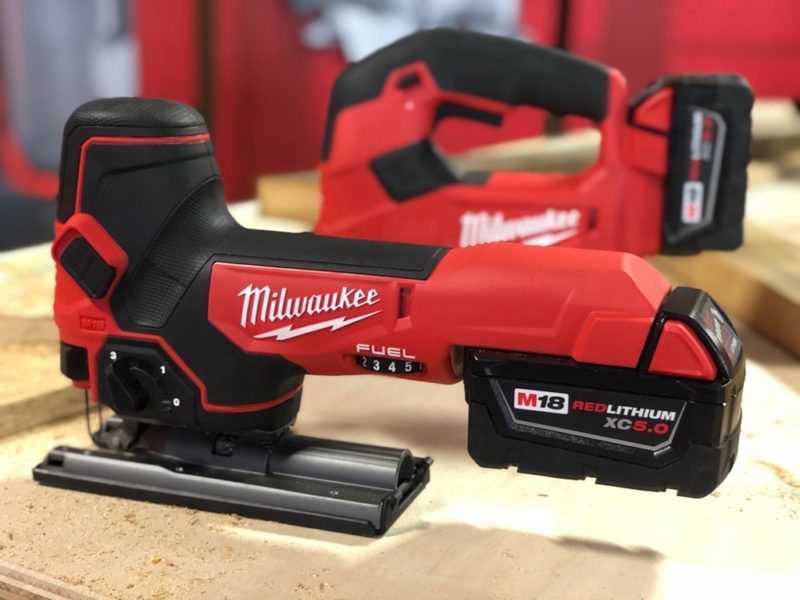 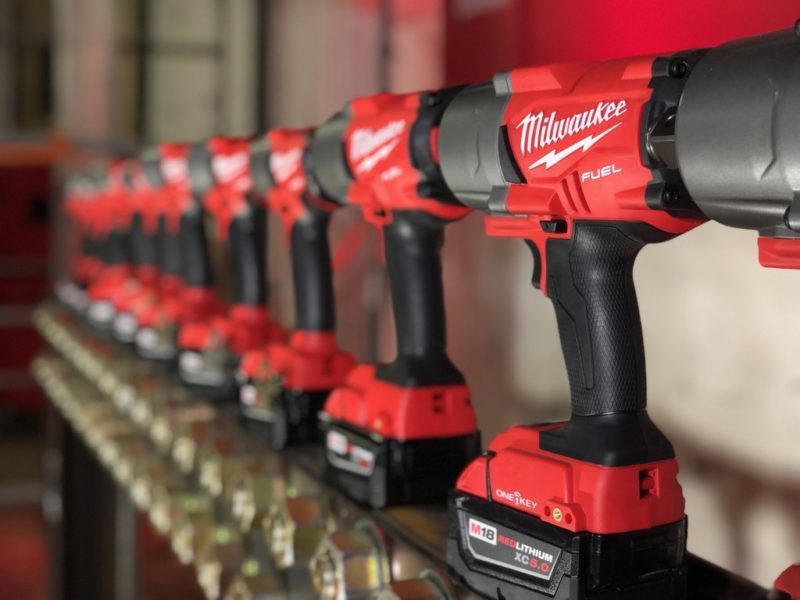 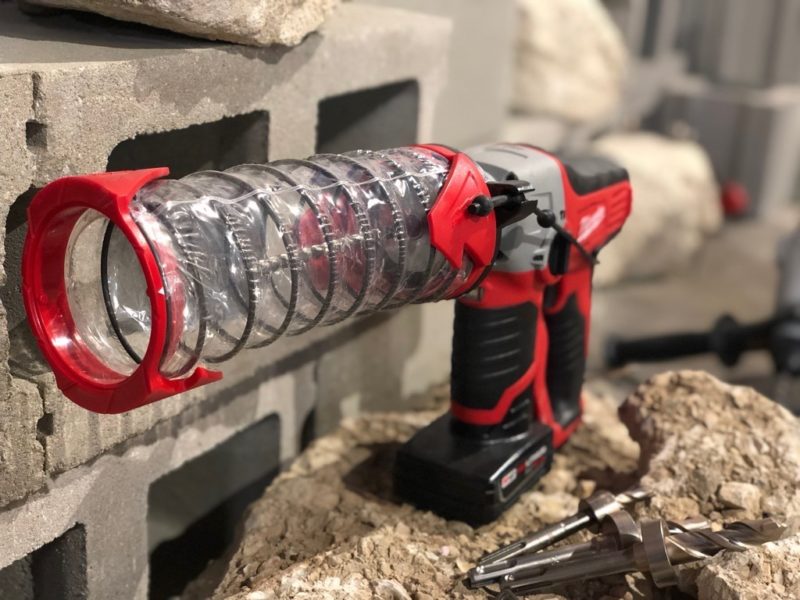 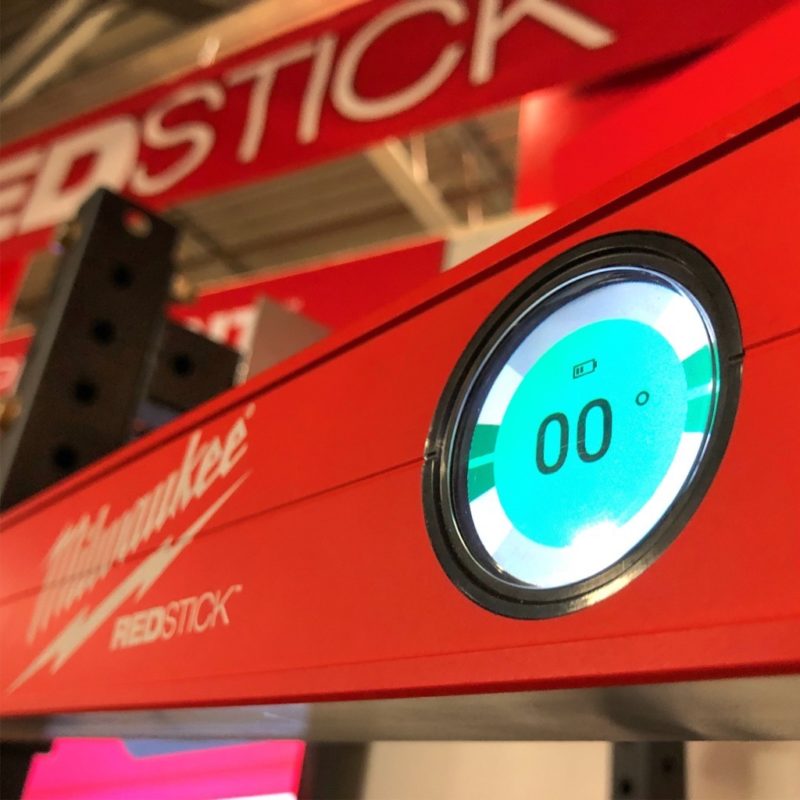 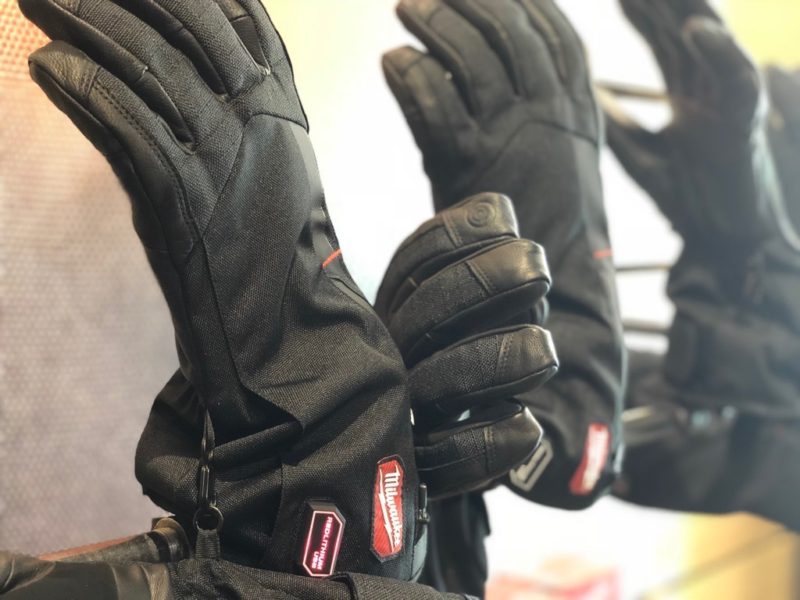