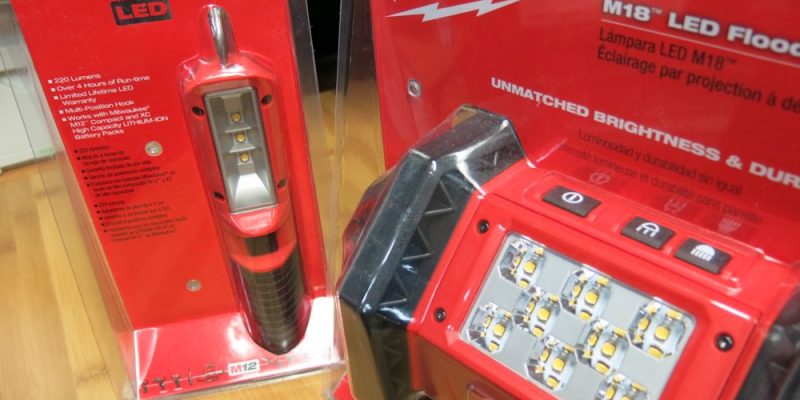 The options for working in the dark have come a long way. First it was a torch, then oil lamps and candles, and eventually the flashlight. While flashlights still have their uses, I often find myself using headlamps when it comes to working on the house. As handy as it is to have directional light wherever you point your face, headlamps still have to be strapped to your head. Aside from that lack of comfort, they also don’t always put out an even field of light that covers a wide area. That’s often where jobsite-style work lights come into play. You don’t strap them to your head, and you don’t have to hold them either. Sadly, most work lights leave a LOT to be desired.

Insanely hot halogen lights were often more incendiary devices than user-friendly lighting. A flood (get it?) of LED lights solved the temperature problem, but most of them were plagued weak brightness, uneven lighting, and sickly color temperatures. Milwaukee stepped in with an impressive line of cordless LED work lights designed to eliminate many of these problems, and a few others you didn’t realize existed.

Milwaukee has launched these LED work lights in both their M12 and M18 platforms. We’ve been reviewing their M12 LED Stick Light and M18 LED Flood Light for almost a year now. With that amount of time, you can be assured we’ve spent countless hours basking in the crisp illumination served up by these two models, and we have some opinions about what works and doesn’t work. We also recently attended the Milwaukee New Product Symposium (aka Heavy Duty ToolFest), where they unveiled new LED Lights we’ll give a preview of at the end of this lumen-packed review! 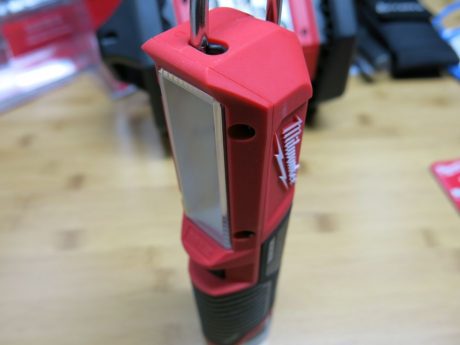 The Milwaukee M12 LED has a lot of things going for it, but it’s also not the ideal light for everything. Let us walk you though some of the details.


Despite it’s small stature, the M12 LED Stick Light cranks out 220 lumens. Compared to many other lights in its class, I found the lighting to be even and very usable. Many work lights have an intense center hot-spot which is a bit like staring into the sun while trying to do detail work. Those same lights often leave a very dim perimeter which is equally challenging to work effectively in. The Milwaukee M12 LED Stick Light casts a very uniform light which makes for a very natural work environment. According to Milwaukee, it’s rated at over 4 hours of run time.


One nice thing about the M12 LED Light is that it has a flat base created by the bottom of the M12 battery. That base makes it easy to plop the light on a bench, floor, shelf or other relatively flat surface. Given that the bottom of an M12 battery isn’t very wide, the light is not well suited to uneven surfaces. I spent a good chunk of time with the M12 LED in our crawlspace, and sticking it on the dirt wasn’t going to work. That’s where the clever multi-position hook comes into action. First off, without touching a thing, the hook provides a fixed loop. That’s handy for hanging the light on a nail, screw or other protrusion of convenience. If the loop doesn’t cut it, you can notch the end of the loop over to release it, and now you have a handy hook. I put the hook to use hanging the light from some small diameter pipe in the crawlspace. Best of all, you can adjust the hook so the light hangs either vertically or horizontally. I was replacing a couple filters on my car, and the M12 LED light worked great in the horizontal position, evenly lighting the entire engine bay.

While the flat base and hook will cover you for most usage, there’s also an optional high strength battery you can buy. The magnet would come in very handy for use around electrical boxes or other metal utilities. I would have liked to have seen the magnet integrated into the design by default and not as a separately-purchased add-on.


The M12 is small enough that you can cram part of it into a pocket or tool pouch, yet it provides much more usable light than any typical flashlight or headlamp. Thanks to its compact size and versatile positioning, I found it to be one of my most reached-for work lights. If you’re working in a relatively small or confined area it’s likely all the light you’ll need.


If you’re working in more than one small, confined area, sometimes a small work light just won’t do. If you need a bright light, or a light to fill a larger area like a room, that’s where the Milwaukee M18 LED Flood Light comes into play.


Milwaukee engineers took a cue from whoever invented pencils with flat sides. The M18 Flood Light can be set on any flat surface either vertically, or horizontally. Thanks to it’s octagonal design, it’s easy to angle the light exactly where you need it. Once you place it down, it’s not likely to move unless you accidentally drop-kick it out of place. About half the time I used the flood light, I simply set it down. I even balanced it on a beefy joist while doing some work in a dark and hard-to-access nook of ceiling space. It did a great job of turning an otherwise pitch black hole into a completely well-lit area. Unfortunately it did not manage to shrink my shoulders so that I could get anything other than either my head OR my arm into that same space, but it’s hard to fault a flood light for my confined space work conditions.


Like the M12 Stick Light, Milwaukee did not skimp on alternative mounting options. If you need to position the light out of harms way, or if you don’t have a relatively flat surface available, you can string it up, hang it from a cross bar, skewer it on 1/2″ EMT or even hang it from a screw or nail with its integrated key hole. Much of my testing of the M18 Flood Light was in a space under a flight of stairs. This space had no existing lighting, leaving the M18 to provide all the illumination for the job. At first, I just set it on the floor to provide the lighting. This worked fine, but given the fact that I was working on the floor I found myself constantly moving the light. As a result, I hammered a quick nail into a nearby stud and hung the M18 Flood Light from its built-in key hole mount. Not only did this get the light out of the way, but it also made for more even lighting on the work area since the light was coming from overhead rather than a very low angle on the floor.

Milwaukee rates the M18 Flood Light as up to 30% brighter than a 250 watt halogen. Regardless of whether it meets that exact spec’ or not, I found it to be very bright. One huge advantage over a halogen work light is that this light runs pretty cool. Halogen work lights are notorious for getting so hot you can use them create char stripes on your favorite steak. Unfortunately, that same searing ability also makes them very adept at burning your hands. My policy with handling recently-used halogens was thick leather gloves only. That policy came about after a couple brief run-ins with halogen light parts I assumed had cooled off already. Aside from not branding you with a grill mark, the M18 Flood Light delivered impressively even lighting.


The M18 Flood comes with three buttons, one for power and two for low/high brightness. While that may sound ideal, I found myself wishing for a single button. When I had the light mounted from on a nail, I was always fumbling and searching for the buttons. I think a single-button design that cycles through settings is a much more elegant solution (and one that Milwaukee employed on their new LED lights I’ll be mentioning below). Another feature I’d love to see would be for the the power button to be illuminated. A tiny LED backlighting the button would make it both easier to find, and sexier too.


Not content to provide two kick-ass LED lights for the lumen-starved work light community, we had a chance to see a few brand new Milwaukee LED work light options at the recent Milwaukee New Product Symposium. 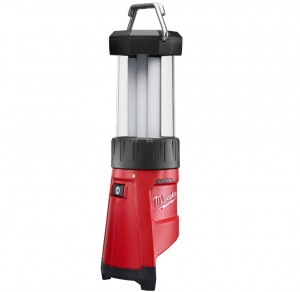 Milwaukee’s number one bit of feedback on the M12 LED Stick Light we reviewed above was, “When are you coming out with the M18 version?” The answer is this month, in 2014! In addition to the great design of the M12, the new M18 version will feature an articulating head, further increasing the versatility of the light. The M18 battery also provides a much more stable base than the M12 version, so I would expect most people will use the M18 sitting on its battery/base. Dual hooks are available on the new version as well. Obviously the M18’s runtime will exceed the M12, and I would expect it to outlast anyone’s single workday, regardless of how long that might be.

Milwaukee also released two new lantern designs, the M12 and M18 Lantern Floods. I was happy to see a single button design in both models. They also featured a unique rotation that enable you to focus the flood in one area, or it can be adjusted for full 360 degree illumination. Both versions feature impressive run times, and the nice, even lighting we’ve come to expect from Milwaukee’s LED’s.

Both the Stick Light and Flood come without a battery or charger. The 2351-20 M12 LED Stick Light will set you back about $80 at our sponsor Ohio Power Tool. The 2361-20 M18 LED Flood Light runs about $99. Both great investments if you’re looking to crank out some high quality lumens. Look for the newer 5352-20 and 5362-20 M18 Stick Light and M12/M18 Lantern Flood lights at OhioPowerTool.com and other retailers shortly too!