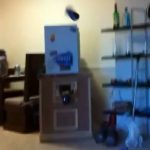 With the Consumer Electronics Show wrapping up, we’re pretty burned out on gadget news. However, we’ve managed to find a gadget not at CES (yet) that will likely appeal to 95% of HomeFixated readers. Never underestimate how much work someone is willing to do to exercise laziness! Especially when that laziness involves beer. It seems that some fraternity finally accepted a high IQ pledge into their ranks. Actually, we have no idea who the guys are in the video. All we know is that genius was involved in this beer delivery invention! Intrigued? Check out the video of the Mini Fridge Beer Cannon in action:

Being a HomeFixated reader, you no-doubt are dying to know the mechanical functionality of this masterpiece (and try to verify it’s not a scam bogus video). Behold the Mini Fridge Beer Cannon Walkthrough:

No word yet on a commercial version, but sign us up to review it if they release one. We’re not sure about the safety, but as beer snobs, we’d prefer bottled varieties over cans. Then again, we don’t want to get a skull fracture trying to get a brew (we can do that at a local pub). Alternatively, you could just park a Kegerator

right next to your couch. Hmmmm.