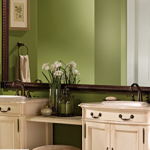 Don’t get me wrong, I love my miter saw! However, with Moen Mirrorscapes, you wont need it to cut angles. In fact, you can even install Moen Mirrorscapes if you don’t have a miter saw (gasp! / the horror!). What seems like only a couple weeks ago, I did some demolition in our bathrooms and “removed” our mirrors. My wife informed me, the mirrors were actually removed about a year ago. Apparently bathroom mirrors are critical to the survival of some folks, so if you have any inkling of narcissistic tendencies (or our partnered with someone who does), then this Moen Mirrorscapes review is for you!

My plan for our two bathroom mirrors was to install fairly large custom mirrors that covered the whole wall area above the vanities. I had been struggling with a plan on how best to frame them, when Moen offered to provide us with their Mirrorscapes product line to test out and review. Basically, Mirrorscapes are a kit consisting of straight lengths of pre-finished framing, four corner blocks that match the frame, and clever adhesive clips that attach directly to your mirror. Each kit comes with little templates that let you perfectly align the clips on the mirror (there are two template versions, one if your mirror is floating, and another if your mirror butts up flush to a wall). 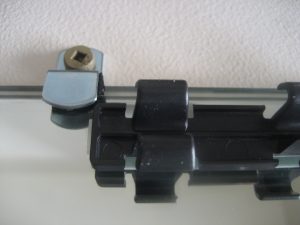 I found the trickiest part in using the Mirrorscapes was figuring out what hardware to use to attach the mirror to the wall. The ideal is if your mirror is mounted with “J Channel” or specialized brackets that don’t project much beyond the edge of the mirror. You also need brackets that are low profile, so they don’t interfere with the frame itself. While I was tempted to use J channel or another almost “invisible” bracket, I really wanted the back of our mirrors flat up against the wall. As a result, I opted for standard low-profile mirror clips. The downside to this, was the clips project about 1/2″ from the edge of the mirror.

Since the Moen Mirrorscapes install flush up with the edges of the mirror, my clip setup would mean the clips would be visible around the edge of the frame (not very attractive). My work-around was to actually modify the Moen alignment templates so they lined up 1/4″ closer to the edge of the mirror. While this modification definitely isn’t suggested or endorsed by Moen, it allowed me to do the install so the frame would overhang the mirror slightly, and from most angles, obscure the mirror clips I used. You can get a better view of the mirror clips used in the image seen above. 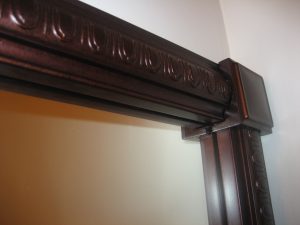 Once the mirror is in, and you’ve aligned and attached the clips with the Moen guides, you temporarily attach the four Mirrorscapes corner pieces. This allows you to measure the lengths between each corner. I took an accurate measurement, and then cut the pieces to length about a 1/16″ short so they’d fit between the corners. The corner blocks cover the cut edge with a little overhang, so a small gap is OK. I also opted to seal the cut ends to prevent moisture from getting into the wood. Yup, I’m particular that way. You know what they say. . . .water is the enemy (unless you’re showering in it).

If you have a basic level of handiness, installing the Moen Mirrorscapes is a VERY easy process. In fact, if you already have the mirrors in your home, and they have suitable clips, this is a super easy project that provides a lot of visual bang for your buck. The Moen Mirrorscapes come in several different styles and finishes to suit just about any decor preference. Moen Mirrorscapes are available from eFaucets for roughly $15-$30 for a set of four corner pieces, and $40-$110 / pair for straight lengths in 4′, 6′ or 8′ lengths. You may need two pair of straight lengths, depending on your overall mirror size.

Editor’s Update, July 29th, 2010:
Unfortunately, our love affair with Moen Mirrorscapes came to an abrupt end at 1:00 am one morning last week. That’s when three out of the four sections of our Mirrorscapes frame came crashing down in our bathroom. Needless to say, it was loud and not conducive to a restful night’s sleep. Plus, I was pretty bummed our great looking mirror frame was now laying on the floor. Moen assured me this is not a common problem, and they are investigating the issue further. In the meantime, I have a pretty good hypothesis on what caused the failure, and some revised thoughts about the Mirrorscapes product line.

In a recent article on Everun Tankless Water Heaters, I mentioned how a certain family member has a propensity for hot showers. Like really hot. Although we have a great vent fan in there, our mirror still regularly gets steamed enough that condensation will actually form drips which run down the mirror. The moisture doesn’t last long as it gets vented quickly, but I suspect it lasts long enough to gradually weaken the hold of the adhesive that kept the Mirrorscapes clips attached to the mirror. Interestingly, the three sides of the frame that failed, were the top, bottom and left side (all closest to the shower). The right side of the frame remaining securely attached.

As you may recall from the original review above, we installed two Mirrorscapes at the same time. The second was installed in a rarely-showered-in second bathroom. I checked the frame on that installation and all the clips but one still appeared securely attached. The one clip that came loose was in a corner closest to the window of the bath (not next to the shower). That corner also was ever so slighty out of alignment with the vertical plane of the wall (which means the top frame piece may have been pulling slightly from the mirror surface), thanks to our less-than-perfectly-true plaster walls.

So, how does all this change my view of the product? Unfortunately, it changes it significantly enough that I’m no longer comfortable recommending it. We installed these on brand new mirrors, that were cleaned and dried thoroughly before installation. The fact that one had a major failure within six months (despite the semi-aquatic conditions I described), and a clip on the second installation is now also loose, make me wary of relying entirely on an adhesive to support a wooden frame. I may actually try to permanently attach the Mirrorscape to our wall (with screws). However, if that doesn’t work, I think I’ll be building my own frame and making sure it’s structurally attached to the wall around the mirror.

We still think Mirrorscapes make a great looking, versatile and easy to install mirror frame solution, we’re just wary of the long-term holding power of a system that relies entirely on adhesive for support. As mentioned, we relayed the information and this update to Moen, and we have also invited them to post any of their thoughts or findings in the comments section below. Moen is a great company with a reputation for high quality products, however the Mirrorscapes did not work out well for us long-term in our particular application.