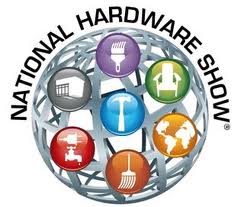 The last few years I have made the annual pilgrimage to Las Vegas for the National Hardware Show, and this year will be no exception. Every year, what seems like millions of media, executives, retailers and home improvement glitterati converge on the massive show floor of the Las Vegas Convention Center. Exhibitors include manufacturers of just about every home related product you can imagine, as well as many you can’t imagine since they’re newly invented and brand new to the market. The show has areas focusing on tools, electrical and plumbing, housewares, paint and home décor, lawn and garden, and the very essential tailgating zone.

Since the National Hardware Show is not open to the public, think of HomeFixated as your top secret, covert operative, ready to spy the hottest, coolest and most entertaining new products on the show floor. Although we typically follow up with some video and other content from the show in the weeks and months after, the best way to stay in the loop is to make sure you’re glued to the HomeFixated twitter feed, @HomeFixated.

And, if the schedule goes according to plan, I’ll be attending a party for the unveiling of the Orange County Choppers custom Skil bike. Via the OCC facebook page:

Paul Jr Designs will build a custom chopper to commemorate the 75th Anniversary of “The Saw That Built America” from SKIL Power Tools. A second SKILSAW motorcycle will be built and auctioned in the fall to benefit The Home Depot Foundation, a non-profit organization that helps ensure every veteran has a safe place to call home.

Expect Twitter coverage to continue for at least some of the party (hopefully with a picture or two of the new Skil chopper).

There will likely be an official blackout on the HomeFixated twitter account later in the night to ensure no photos go public that might recall scenes from the movie The Hangover. Assuming I’m not in jail, Twitter coverage will continue tomorrow (Wednesday) as well. Contrary to the saying about Vegas, What happens at the National Hardware Show will NOT stay at the Hardware Show!