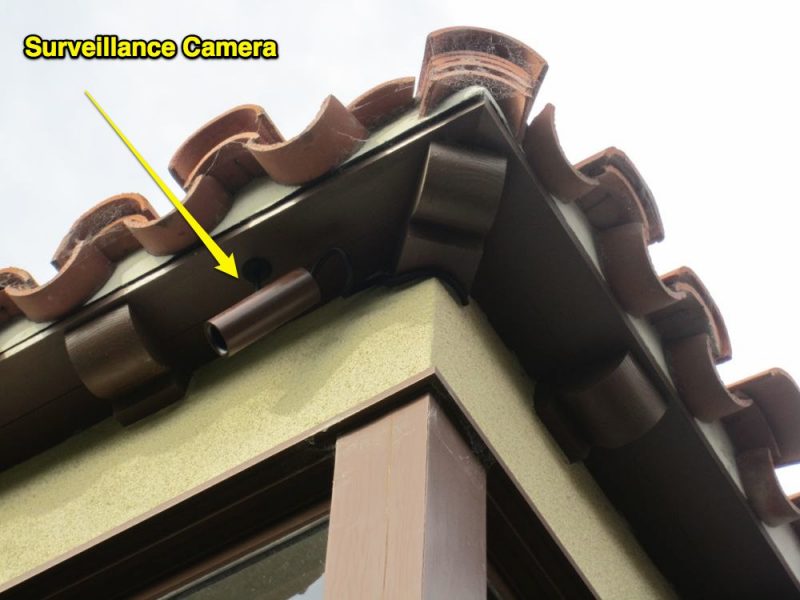 Last week, we talked about how to install a video surveillance system. In that marathon post, we mentioned that we weren’t too excited about installing bright, metallic silver cameras on every corner of our 1930’s Spanish style home. As a result, I devised a simple and relatively quick hack to dress down the appearance of the cameras and help them blend in more to the architecture. Before any hate mail comes in, let me start this off with a disclaimer: If one of your primary goals is deterrence, then camouflaging your cameras might not be the best strategy. Then again, you can use this exact same how-to, but substitute glow-in-the-dark, day-glow, fluorescent pink paint instead, and then you’ll really draw attention to the cameras.

To Camouflage or Not to Camoflage, That is the Question
Let’s face it, most surveillance cameras are butt ugly for domestic use. If you’re securing a Walmart parking lot, that’s one thing. You probably don’t care much about how your cameras look. However, if you’re securing your home, you may not want it looking like a prison compound with gaudy cameras hanging off every corner of your house. Then again, most people that install surveillance cameras also expect some level of deterrence. In our case, I couldn’t stand hanging four bright silver Vivotek cameras off the eaves on vintage (by California standards) home. One option would have been to paint the camera housings directly. Instead I came up with a hack that would clean up the whole look of the camera assembly and camouflage it perfectly with our brown eaves.

Finding the Right Conduit or Pipe
It turns out, Lowes carried some PVC electrical conduit just slightly larger than the diameter of the Vivotek cams. I tried Home Depot first, but they didn’t carry the right size for my cameras. You may need to do some hunting around, but ideally, you’re looking for PVC or ABS conduit/pipe with an inner diameter that’s a hair bigger than the outer diameter of your video camera.

Cutting the Conduit or Pipe


I opted to cut the tubes a little over an inch longer than the Vivotek cams to create about 1/16″ overhang in the front and about one inch in the back (to help conceal where the wires exit the camera). I used the Bosch Axial Glide miter saw to cut the conduit into four lengths. A hand saw, hack saw or even Sawzall works too, however you’ll need to spend more time cleaning up the cut for aesthetics. Ideally, you want a nice, smooth cut for a clean manufactured appearance. If you do use a miter saw like I did, be aware your work area will soon be littered in PVC confetti.

Drilling for the Camera Mount


To figure out where to drill for the camera mount, I held the Vivotek camera next to the housing tube. Since I wanted a reveal of 1/16″ at the front, I kept the camera 1/16″ back from the front of the tube. Once they were lined up next to each other, I used a sharpie to mark a dot for the center of the hole. I also used a nail punch to create a divot on the mark to prevent the drill bit from walking. I wanted a nice clean hole for the camera mount. Since I don’t have a drill press, I was not convinced a spade bit was a good choice on the rounded surface. 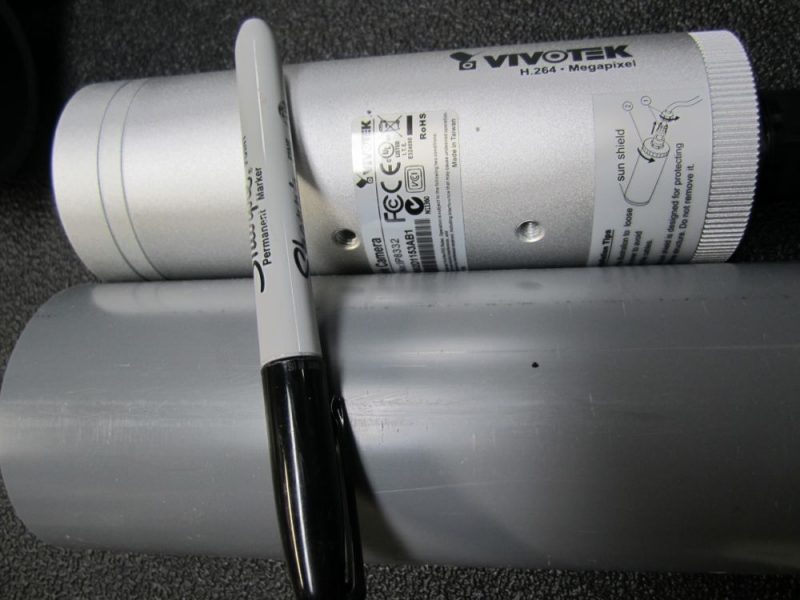 Instead, I grabbed a Milwaukee hole saw (this particular saw is more typically used for metal) and found it made a nice clean hole for the camera mount when I had carefully secured the housing in a vise. Depending on the design of your camera mount, you may need to make sure that the hole still leaves enough space for the disk that locks the camera to the mount to rotate. You may also need to use some sandpaper or a file to clean up the hole. Once the holes were added, it was time to get going on the most critical camo component; paint. 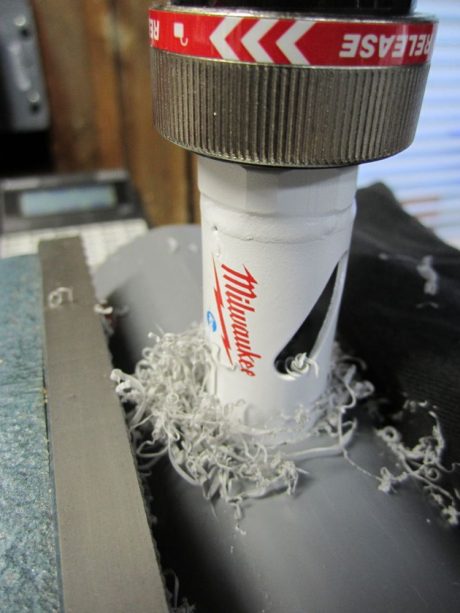 
I then painted the four tubes with the same brown paint we use on our eaves. In our case, I used brown linseed oil paint which I was able to actually wipe on in thin layers. A good quality spray or house paint will likely work just fine too. Make sure you have throughly cleaned the pipe prior to painting. I also used a very fine grit sand paper to go over the surface being painted to provide a little more bite for the paint. If you do the same, be aware that using a sandpaper that’s too rough will result in scratches that show through the paint. I’d recommend 200+ grit at a minimum. For the actual painting process, I attached some strings to the ceiling of the shop and then fed the string through the mount hole and into a temporary wood block. This enabled me to paint everything in one shot and let it dry without getting marked-up. 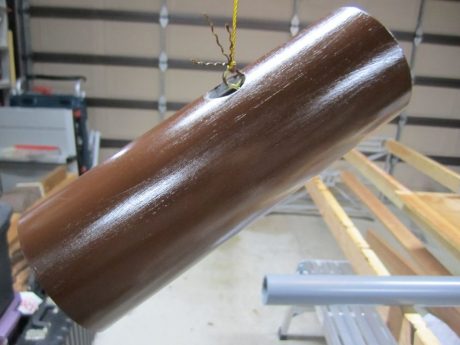 Installing the New Video Camera Housing
The conduit I used was actually about 1/16″ too big for my cameras. I likely could have installed them loosely, and no one would have been the wiser, but I couldn’t bring myself to look at them if the camera looked slightly off-center. I know, I’m totally obsessive, especially given most of these would be 20 feet off the ground. My wacky solution was to get a length of wax paper, fold it in half lengthwise, and then wrap it around the camera several times. I then cut a hole where the threading for the camera mount was and carefully slid the camera into the new housing. It worked brilliantly. Regardless of whether you do any wax paper craziness, you’ll want to thread the camera mount arm through the hole in the housing and into the camera. By doing so you then lock the camera into place. One note of caution, make sure you pay close attention to your grip on the camera and housing. Until you get the mount arm in place the camera can easily slide out of the housing and wind up an expensive pile of scrap materials on the ground. 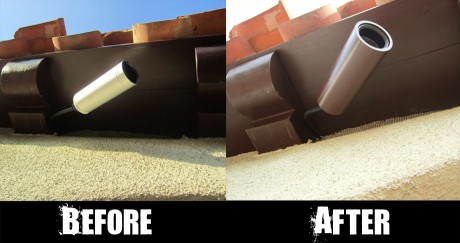 The Finished Result
As you can see from the before and after pics, the difference is pretty remarkable. Before the camouflage, the surveillance cameras looked like a neon Swatch on a 90 year old man. Now, they blend right into the house and are hardly noticeable. The downside is, it would most likely take an observant, professional burglar to notice the video system. And, contrary to popular belief, most burglaries aren’t exactly pulled off like The Italian Job. IF you’re as obsessive as I am about the appearance of your home or business, then this strategy is an easy, inexpensive DIY project that produces a very custom result. 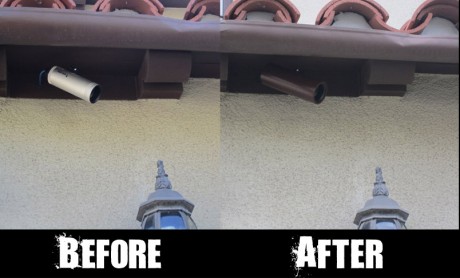