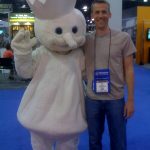 I made it back from the 2010 National Hardware Show in Vegas and managed to avoid doing prison time (LVPD is surprisingly easy to bribe!)  Actually, it turns out you have to do some pretty crazy stuff to see jail time in Las Vegas.  This was my first year covering NHS for HomeFixated and it was a lot of fun!  I received one bit of advice before the trip and that was from a veteran CES convention goer, “Use protection.”  And by protection, he meant really comfortable shoes.  It turns out NHS is ridiculously immense, and if you don’t have comfy shoes on, you’ll be curled up on the ground crying by the end of day one.  In this post-NHS wrap-up, I’ll be summarizing some of the action, and of course discussing hot booth babes!

Before the show, one HomeFixated fan insisted I post photographic evidence of booth babes at NHS.  In case you’re not familiar with the not-so-PC term, booth babe refers to the highly photogenic women often wearing minimal amounts of clothing used to promote products at trade shows.  The practice of using booth babes is controversial in some circles, and my honest take is that it’s ineffective for several reasons:

Never one to decline a reader request, I took the picture in this post with one really hot booth babe. Seriously, she was REALLY HOT. It was around 90 degrees in Vegas, and she was wearing this crazy fur-coat-like suit. Even with AC, she was really hot. So what was this particular booth babe promoting? Frost King weatherstripping of course! Anyway, my thanks to the Frost King booth babe for humoring me with a picture.

The bad news from my visit to NHS is that I wasn’t able to visit a lot of the booths I had hoped too. I simply ran out of time. In fact, I didn’t eat lunch while I was there just so I could get in more visits with people at the show. The good news is that I found some really great products and shot some video with quite a few companies and their rep’s at the show. We’ll be editing the video a bit and then posting them to HomeFixated at a rate of one or two a week for the next couple months. Stay tuned for some cool product info! We’ll also be doing hands-on reviews of quite a few of the more interesting and innovative products we stumbled across, as well as general articles minus the hands-on reviews.

If you’d like to keep your finger on the pulse of tool and home products news, stay close to HomeFixated.com! Hope to see you in Vegas next year!