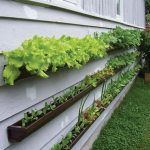 Marc saw this article and thought it deserved some mention – I agree!

When the summer is short, like it is in Juneau, Alaska, you want to make the very best use of it. So when new Alaskan Suzanne Forsling realized the sun didn’t optimally hit her garden, she decided to do something about it. No, she didn’t move.

Instead, she came up with the clever idea of mounting rain gutters along the siding of the side of her house that received the most sun rays. Not only did her summer veggies get the Vitamin D they needed, but they were protected from many typical garden pests like slugs and rabbits.

The result? A super organic bounty that lasts from June to September. You’ll obviously want to test out how your siding holds up to having a rain gutter mounted along it (we imagine you’ll need to be able to patch it up for re-sale) but it’s something to consider for wannabe gardeners whose backyards are covered by shadow. Nice going, Suzanne!