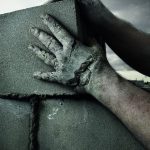 That’s right we’re reviewing hand lotion. On HomeFixated. Your source for all things brutish. But this isn’t some rose-cotton-candy-pixie-dust-infused lotion you might be nasally accosted by when briskly walking by Bath and Bodyworks the last time you were dragged to the mall. This is “On The Job” hand lotion, made specifically for tradesmen (although I’m assuming women could use this too).

Here’s the first clue this isn’t your ordinary lotion, the container color is not fuscia, pink, light blue, or even white. . . it’s navy blue. There’s even a burly construction worker on the container and he’s holding a wrench that must be three feet long and weigh 80 lbs. This hand lotion dispenses like epoxy (one part antiseptic to kill whatever sketchy things have found their way onto your hands, one part moisturizer to prevent your hands from cracking like a stone mason’s).

Did I try it? Yup, but extremely reluctantly. I hate lotion. My wife on the other hand is a total lotion freak. If they produced lotion in 55 gallon drums, my wife would buy it. It’s not uncommon for my wife to hold my hand after she lotioned-up and for me to immediately recoil like her hand was covered in Ebola virus. I can’t help it, I just don’t like lotion. So with that “I hate lotion disclaimer” firmly in place, on to the details.

Aside from the über-manly marketing, what makes this lotion different? For one, it’s infused with Benzalkonium Chloride. That’s right, not aloe vera, but instead, a compound designed to kill stuff. According to Wikipedia, “As an antiseptic, it has the advantage of not burning when put on a wound, which is not the case with ethanol-based antiseptics or hydrogen peroxide.” If you’re job has you grabbing dirty stuff, On The Job might be your perfect weapon. On The Job Lotion also doesn’t feel like you just rubbed your hands in Crisco either. It’s about 100 times less greasy than my wife’s lotion, for whatever that’s worth. No OTJ product trials were conducted on animals, so you can rest assured this lotion potion wasn’t applied to the eyes of cute little bunnies either.

Will I use it now that HomeFixated testing has completed? The honest answer is no. Of course, my answer to that question would be no for any lotion. However, if you do burly work and your hands take a beating, On The Job is worth checking out. Thanks to the marketing and packaging, your construction buddies probably won’t even heckle you if they see you applying it. Assuming you don’t ask them to rub it on for you.

You can order On The Job hand lotion for about $9 directly from OnTheJob.com