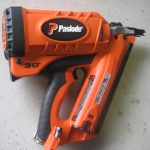 Bear with me, as I eventually get to the point of this article: a hands-on review of the Paslode CF325 Cordless Framing Nailer. Remember the first time you ditched your phone cord and used a cell phone? Neither do I, but I’m pretty sure it was awesome. Back in the day, I still remember Sonny Crockett and Rico Tubbs toting around their briefcase sized cell phones in Miami Vice. Technology has come a long way, especially when it comes to ditching cords (and hoses).

So then, why is it that we’re still shackled to our air compressors whenever we want to use a nail gun? One company is on a mission to take us from cheesy 70’s corded phones, right past the Miami Vice bag phones, and straight into the 21st century: Paslode. Several manufacturers make nailers that ditch the air hose, but few have the reputation for it that Paslode does.

Paslode took a bit of a risk sending me this cordless nailer to review: I am a self diagnosed air tool addict. As long as you don’t accidentally shoot a nail into a body part, they are lots of fun, and make for incredibly productive work. Sometimes using a hammer is so. . . retro. Despite my love for air tools, I kept an open mind in checking out the Paslode cordless nailer.

The Paslode uses a small fuel cartridge (not unlike what you might use to refill a butane lighter). There’s a little access port on the CF325 you simply open up, drop the fuel cell into and then snap closed again. It’s quick and easy. In addition to the fuel, the Paslode nailer uses a rechargeable battery to spark things up. The handy case comes with the nailer, a battery/charger, and even safety glasses (which I highly recommend when working with hazardous projectiles). When I first picked up the CF 325 it felt big, so I compared it to my Porter Cable framing nailer (air powered). The Paslode, although a bit beefier in spots, was actually more compact overall since it didn’t have the exceptionally long magazine the PC does. 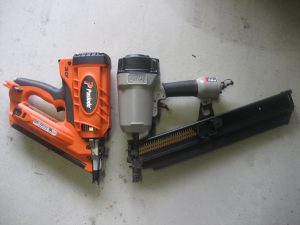 After a quick charge of the battery I was ready to lock and load. Most of my testing of the Paslode was done framing up some dimensional vintage 2×4’s and 2×6’s in a garage ceiling. The job involved a lot of up and down ladder work, and a few awkward / tight nailing positions. Any skepticism I had about the Paslode CF325 quickly evaporated after the first few nail shots. Having the freedom to carry and move the gun without an awkward hose dragging around and getting in the way was epic!

The Paslode also performed very well. I had no jams, and the CF325 was incredibly consistent in terms of nail depth on each drive. The nail depth adjustment looked a little wonky compared to the dial adjustment I was used to, but I found the Paslode system pretty easy to work with. Be aware that there is a little bit of cycle time between each shot, which might slow down some of the ultra-high speed nailing pros out there. But it’s still fast. The tip on the CF325 is seriously aggressive, looking more like a weapon then a nail gun tip. You won’t need to worry about the tip slipping, even when doing some toe nailing. The CF325 also includes a built-in rafter/belt hook, which is a paid accessory on some other nailers. Nice. 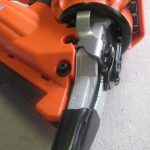 The only two areas I can really find any fault with are with the fuel and the system for clearing nail jambs. In terms of the fuel, it’s the magic stuff that lets this thing work without a hose. You trade in your hose, but you do need to replace fuel cartridges periodically, and there’s a mild smell of fuel exhaust when the tool is in use. The Quicklode fuel cell drives about 1000 nails, and Paslode conveniently sells them in combo packs, so you never need to worry about running out of fuel with your Paslode nail supply. However, if you already have a huge stash of nails, or you like buying non-Paslode nails, the combo pack might be a minus. Currently the fuel cannot be purchased separately. Personally, I think the fuel tradeoff is well worth the convenience of being cordless.

I was also a bit disappointed to see clearing nail jambs does require tip disassembly via an allen wrench. I would have liked to have seen a tool-less option as some of my Porter Cable nailers have. Since I didn’t have any jambs, that particular design issue wasn’t a problem for me. Minor tradeoffs aside, I really liked the CF325 Framing Nailer, especially for someone like me who often does quick projects which are made much easier sans compressor and hose.

So if you are someone who wishes you could go back to the good ole days of dialing your rotary corded phone, the Paslode is probably not for you. But if you like being cordless, hose-less and wireless, the CF325 is a very handy tool for your arsenal. The Paslode CF325 Cordless Framing Nailer

is about $430 online, with the Paslode Framing Nail and Fuel Combo Pack

running a little over $40. We’re also giving away the same Paslode CF325 we used for testing in this review (don’t worry we babied it, so it’s like-new) in our February 2010 Free Stuff Giveaway!