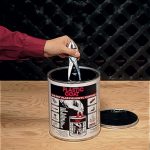 I’m exposing myself as an uber-geek with this post, but when I first saw the bucket of Air Dry Plastic Coating from Gempler’s, my first thought was NOT “Wow, now I can insulate some of my tools.” Instead, it was “Wow, if I dumped a couple of these over my head, I could TOTALLY be that monster who killed Lt. Tasha Yar for Halloween!”

Admittedly, that’s a fairly stupid idea to indulge in. While there isn’t a corrosive hazard symbol on the container, pouring a fumey, flammable, tar-like chemical all over one’s body probably wouldn’t be the brightest thing to do, especially seeing as there’d probably only be two people (MAX) in the room who’d know who Armus was. We suggest putting the Star Trek Next Generation fantasies aside for the moment (sulk!) and focusing on the intended uses for Plastic Coating.

And what are these intended uses, you ask? By dipping, painting or spraying Plastic Coating on your tools, you can insulate and protect them against rust, moisture, salt, corrosion, abrasions and chemicals such as acids, alkalis and gasoline. This can also be handy for adding additional grip and if you’re working outside in the hot sun, you won’t risk a branding iron effect when you grab the handle of your wrench or pliers. I like that. Once set, Plastic Coating won’t get bubbly or melty and also won’t crack, chip or peel.

If you’re not crazy about black, it comes in a variety of colors including green, red, yellow and clear. A gallon of Air Dry Plastic Coater, which offers coverage 36 for 40 sq. ft., will set you back a spendy $107 on the Gempler’s website.