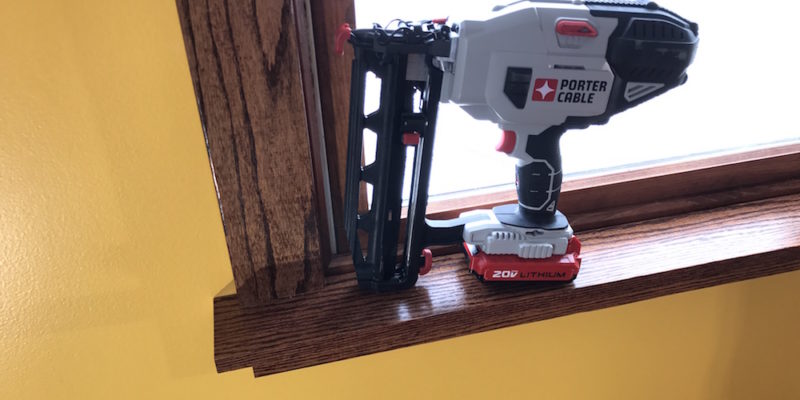 Seems like lately I find myself getting cranky if I actually have to uncoil an extension cord, or schlep my compressor up the stairs and plug my ears while I wait for it to compress. It could be that I’m just a miserable old fart, or maybe I’m just sick of winter; I prefer to think that it’s just because I want to use my time and manly muscles more constructively. With the huge leaps in battery and motor technology over the past few years, the variety of cordless tools that equal or exceed the ability of their corded brethren continues to grow. Porter Cable is among the players expanding their cordless offerings, including a line of 20V MAX fastening tools. The PC folks sent us a Porter Cable 20V MAX finish nailer to evaluate, in an attempt to stifle my whining.

We received the kit, model PCC792LA, which includes the Porter Cable 20V MAX finish nailer, a 1.5 Ah Lithium Ion battery, and a charger. As a helpful touch, they also include a little box with 200 nails to get you started, just in case you have limited brain cells, like me, and forget to grab a box of nails. The nailer can fire any brand of 16 gauge straight finish nails, from an inch to 2-½” long.

Aside from the belt hook, the Porter Cable 20V MAX Finish Nailer is fully assembled and ready to go, right out of the box. Installing the hook, if desired, is easy and takes about a minute. At six pounds plus, the nailer isn’t exactly a featherweight, but it’s comfortable to hold and easy to maneuver. And it’s definitely lighter than my compressor. The handle and the back end of the motor housing are covered with a rubber overmold. This makes the tool a bit more comfortable and slip-resistant, and helps protect finished surfaces from those clumsy “oops” moments I seem to be prone to. With a battery installed, the tool has very good balance.

The nailer is simple and fairly intuitive to set up and use. The magazine, which can hold 100 nails, is loaded from the rear. Just slide in your nails, press the red release button on the follower, and slide it around behind the nails. Slide a battery into place, and you’re ready to launch some nails.

Note: If you get all set up, and can’t seem to pull the trigger, it’s likely the trigger lock is on. Either that, or you’re extremely weak. The lock is easy to miss; it’s built into the front edge of the handle. Slide it up to lock, and down to unlock. It’s a good safety feature to have on a tool that launches a 2-½” piece of steel, and that’s always “ON” when a battery is installed. If you still can’t pull the trigger, apparently you ARE extremely weak.

The nailer only operates in “sequential” mode. That’s nailerese for “Push the nosepiece down on your workpiece, pull the trigger, release the trigger, remove the nosepiece from the work surface, move on to the next target, and repeat.” It’s a lot faster to do than it is to say, but it’s not as fast as bump, or contact, mode. In bump mode, you depress the trigger before contacting the work surface, and hold it in. Move along your workpiece, and every time you “bump” the nosepiece into it, a nail fires. It’s definitely faster, but you lose some control and precision, and occasionally end up with a double strike resulting in a jam.

The nailer never jammed during my testing. If it had, jam clearing is fast and easy. To prevent an unscheduled underwear change, your first move should be to remove the battery and engage the trigger lock. Next, push up the stall release lever, to release the driver blade, then release the nail pusher and remove the nail strips from the tool. Undo the latch on the nosepiece, swing it out, and clear any jammed fasteners, using pliers if they’re REALLY jammed in there. Push the driver blade back up, if it’s stuck in the down position, close everything up, and you’re back in business.

Trimmin’ It With The Porter Cable 20V MAX Finish Nailer

As part of a renovation we’re doing on an old farmhouse, we replaced all the windows on the second floor. All the cheapo trim in the house is being replaced with ¾” oak, including the window trim. The house has all new hardwood flooring, and some of the rooms are furnished, so we need to be careful not to screw up the floor or furniture. Using a cordless nailer, like the Porter Cable 20V MAX Finish Nailer, is an excellent alternative to setting up a compressor and dragging an air hose around the rooms.

I wanted to make sure I didn’t have nails protruding from my beautiful new trim when I finished, so I tested the nailer on a piece of scrap oak and 2X4 before starting. Setting the drive depth was fast and easy using the red dial near the nose. There’s a little indicator there, and setting it to roughly 80-90% of full depth got the nail heads just below the trim’s surface.

I maneuvered the trim into position, grabbed the nailer, and pressed the nosepiece against it. When I pulled the trigger, there was about a one-second hesitation as the nailer spooled up, then it launched a nail. This can be confusing for someone used to using a pneumatic nailer, where the gun fires instantly when the trigger is pulled, but it’s a fairly common phenomenon on battery-powered nailers. It’s a pretty brief delay, and you get used to it after a few shots.

Anyway, the nail went through the trim and into the structure below, and ended up with the head just sub-flush, right where I wanted it. I worked my way around the remainder of the frame, until all the trim was firmly attached. The nailer worked flawlessly, with no misfires, jams or protruding nails. One window down, nine to go!

To give the nailer a further workout, I took the remainder of the 200 nails that came with the Porter Cable 20V MAX Finish Nailer (100 2”, 100 2-½”) and fired them into the edge of an upturned 2X4. As I mentioned, there is no bump mode, but the tool can move along pretty quickly, and I fired all the rest of the nails at a fast clip. The tool never jammed or stalled, and it buried all of them sub-flush. All 200 nails were fired on one charge of the 1.5 Ah battery, and when I ran out of nails I threw the battery on the charger. There’s no battery gauge, so I don’t know how low it was, but recharging took just over an hour with the provided charger. That’s a pretty long time to charge a 1.5 Ah battery.

Is The Porter Cable Able To Join Your Tool Stable?

Who is the Porter Cable 20V MAX finish nailer likely to appeal to? Probably not professional trim carpenters. Even though the lag when shooting a nail is short, these guys are used to instant gratification. The inability to use bump mode, and absence of some other features listed below, would be a further deal killer for many. This nailer actually works pretty well, though, and would likely be a very welcome addition to renovation contractors, who do a variety of tasks, including trim work. Ditto anyone doing punch list work for a contractor. The nailer would be a great addition to the tool collection of any avid DIYers who want the ability to trim out a few rooms, or do the occasional woodworking project. Buying the tool would be cheaper than acquiring a compressor and trim gun, and it’s sure as hell lighter and easier to store when you’re not using it.

Quibbles? A few. Even though it’s not an option I’d use all the time, I’d like the ability to use bump mode. It would also be helpful to have an indication of how much battery power is left. The Porter Cable batteries have no power gauge, and there is no indication on the tool, either. Balancing on a ladder, halfway through installing a piece of crown mold, is a bad time to discover your battery is dead. In the same vein, a 1.5 Ah battery isn’t a lot of juice for someone doing production work. To eliminate down time, it would be helpful to either provide a second battery, or ship it with a more powerful battery, like the 4.0 Ah.

Another feature you’d expect on a nailer at this price point is dry fire lockout. This prevents the nailer from firing when there are no nails in the tool, which can damage the tool – or your work piece, when the driver blade punches a hole in it. Finally, it would be handy to have a case or tool bag to store and transport the tool. With any nailer, you inevitably acquire two or three boxes of different-sized nails, and maybe an extra battery. A tool bag helps keep everything corralled, and keeps the dust off between uses.

Overall, the Porter Cable 20V MAX finish nailer seems to be a well-made tool. It’s fast and easy to use, and it had plenty of power to attach oak trim. Being able to leave the compressor and air hose tucked away is a beautiful thing, and has gone a long way toward making me a less cranky individual. Porter Cable backs the tool with a three-year warranty, and offers it as a bare tool as well as in the kit. If you’ve been feeling cranky lately, go check it out at Lowes. 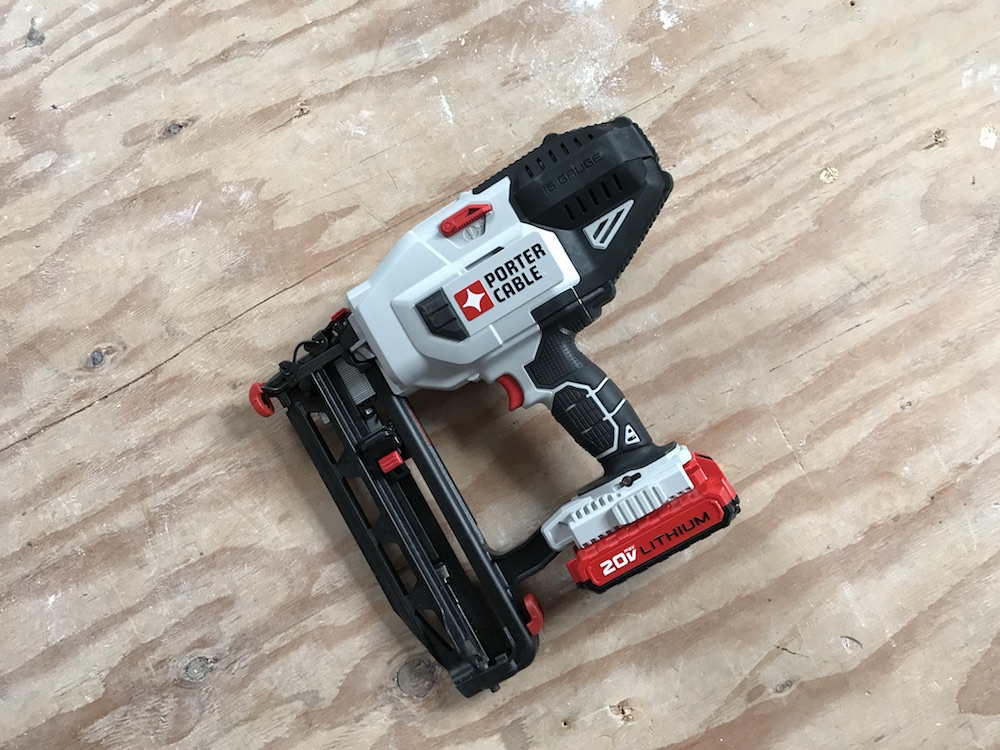 Buy the bare tool from Lowes for around $180: