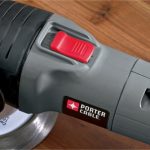 When it’s time to do some serious sanding, look no further than the Porter Cable 7346 6″ Random Orbit Sander. The PC 7346 feels like a solidly built machine. A grande sized on/off button is easy to find on the top of the unit, yet it’s designed so you’re not likely to accidentally turn it off. The “accidental turn-off” is something I’ve run into a lot on other sanders (and during my early dating career). In relation to power tools, the accidental turn-off usually results in several seconds of confusion while I mentally go through a checklist like this:

1) Did I blow another circuit with all my power-tool use?
2) Doh! I must have accidentally sanded through the power cable . . . again.
3) Cyber terrorists have finally hacked our electrical system and shut down the country’s power. . . we’re doomed!

The Porter Cable will likely shave countless seconds off your sanding job if you too go through similar mental checklists. Another thing that will save you time is the variable speed ability of the PC 7346. The folks at Porter Cable give you not one, not two, but six speed settings! Actually, it’s a lot more than six, since the variable speed dial actually has several increments between the six numbers. Why six numbers and not ten? Who knows? I personally think they should have gone with the Spinal Tap amplifier settings and had all their tools variable speed to eleven! Porter Cable, think of the machismo you’d be tapping into with a setting of eleven! Even with the current 6+ settings, you get 2,500-6,800 OPM, to randomly orbit your project to a smooth finish.

The Porter Cable 7346 uses standard 6″ PSA (Pressure Sensitive Adhesive) sanding discs. There’s even one in the box to get you started. Also included are a side handle which can be mounted for lefties or righties, and a wrench to remove the sanding pad. The sander packs 4.5 amps of power, giving it plenty of juice for typical sanding applications. You can find the Porter-Cable 7346 6-Inch Random Orbit Sander

for a little over $170 at Amazon. Or, if you’re lucky enough to be reading this in October, 2009, you can win the sander in our monthly HomeFixated.com Free Stuff Giveaway!