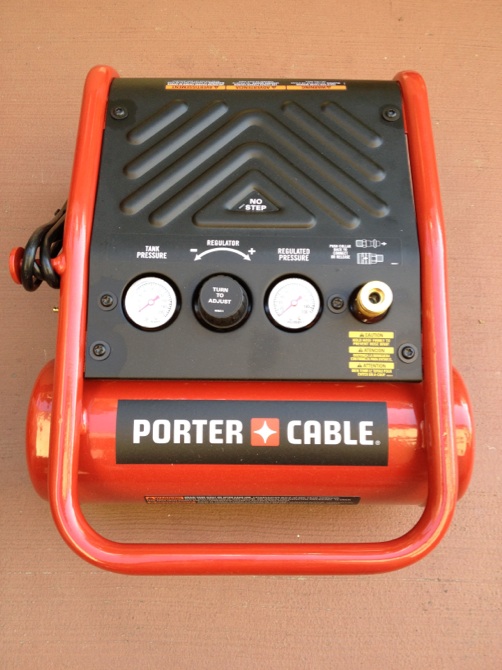 Let’s face it, most air compressors are metal monstrosities. They are big, hulking, heavy and loud. When you’re doing a little light trim work, or even working with a 23 gauge pin-nailer, carting around or hooking a hose up to a 50-200 lb tank just isn’t practical most of the time. The market is filled with compact and semi-compact air compressors, but the Porter Cable C1010 Compressor is the first one we’re inclined to describe as “The Laptop of Air Compressors.” How useful can a tiny compressor like this be? It’s been a couple months since Porter Cable sent us one, and we’re ready to report back on what we found.

Stats
Lets start with a few basics. At 24 lbs and just 9″ thin, the C1010 sports measurements that many misguided Hollywood starlets seem to aspire to. The compressor (not the starlet) has an easy-grip handle to make toting it around a breeze. Lazy / oil-adverse compressor users will also be happy to hear the C1010 is oil/maintenance-free, leaving you to compress/nail/blow without being hassled with refilling an oil tank. With a 2.6 amp draw motor, you can fire this little beast up without fear of tripping that pesky circuit breaker that tends to trip more than a dizzy, drunken clown running an obstacle course. I was tempted to hook up a nine volt battery for power, but that probably wouldn’t quite cut it.

Break-In
No, we’re not suggesting you steal one of these. Before you get rolling with it, Porter Cable suggests you follow a fifteen minute break-in period. Check the manual for details, but you’re basically going to run the compressor for fifteen minutes with the drain valve open. Then close the valve and let the tank fill up until it reaches its cut-out pressure. On some compressors, a fifteen minute break-in period would amount to sonic water-boarding. Those of you in the anti noise-torture camp will be happy to hear the Porter Cable C1010 is as quiet as it is small.

Sound / Noise
It seems like almost any compressor without wheels has claims of being “quiet.” I have to say, the C1010 actually delivers on that promise. If you want to get all technical, Porter Cable says this mini compressor is rated at 71 dBA “tested per ISO 3744.” Since that doesn’t mean a whole lot to most of us, let me provide a more subjective analysis. Regular readers know that I reach for hearing protection at the slightest of noises. I am happy to report that the C1010 was so quiet I could actually still enjoy my music in the shop (without having the music cranked, and without reaching for hearing protection). If you have a tendency to jump out of your skin every time your 200 dB compressor fires up during a nice, peaceful trim project, the Porter Cable C1010 should be right up your alley. I’ll rate it as significantly louder than a laptop, but more quiet than most small compressors I’ve heard.


The box has a typo on it which indicates 75 SCFM (a measure of airflow in case you’re not hip to it). We think they actually meant .75 SCFM. Obviously, at this size, the compressor isn’t exactly designed for your next framing project. Just for kicks though, I actually cranked the C1010 to a little over 100 PSI (it has a 135 max), and hooked up my framing nailer to it. I was able to drive about five framing nails before the unit cycled on to gasp for more air. I suppose PSI is PSI, and you could use this on a tiny DIY framing project in a pinch. However the C1010 is really a compressor designed for lighter duty, lower air-flow gigs. It’s so quiet that the C1010’s more frequent cycling on and off really isn’t particularly noticeable or annoying.

Cons
I actually have to struggle a bit to come up with much downside to this compressor (assuming you’re using it for what it’s intended for, and not a framing project). The C1010 sports a beefy roll cage and nice rubber feet which are key for minimizing vibration. Those are both good things of course. The downside with the briefcase-style handle layout, I found myself storing the unit in its natural more upright position.

When doing so, the unit sits on the metal of the roll cage rather than on some nice rubber feet. I’d like to see feet on the bottom and back so the unit is stable and protected in-use and in storage. The other thing I wasn’t super keen on was the tiny power switch for. The switch is so small, it’s easy to bump on and off. I’d like to see a more conspicuous, beefy switch on this unit for both usability and visibility. 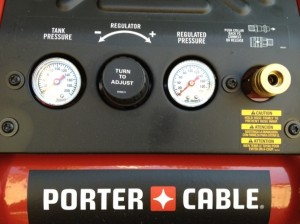 Overall, we have to give the Porter Cable C1010 Compressor a glowing endorsement. It’s small, quieter than most small compressors, and solidly built. Despite its laptop size, we don’t recommend actually using it on your lap, especially when you’re draining the air/condensation out (which should do at the end of each day of usage). You can find the Porter Cable C1010 Air Compressor on Amazon

for right around $100, an absolute killer deal.